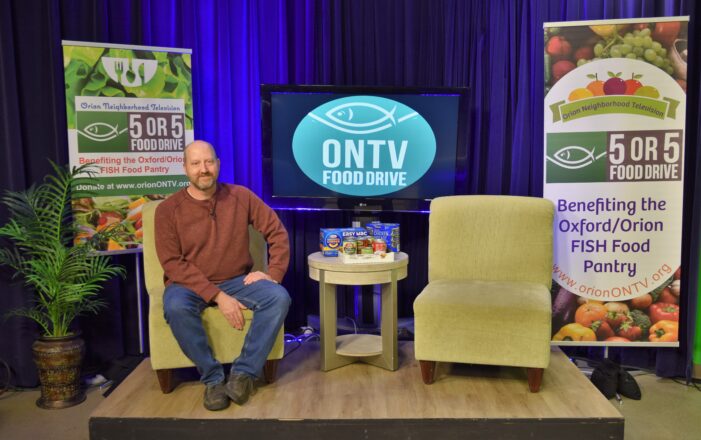 Orion Neighborhood Television Executive Director Ian Locke (pictured) and the ONTV team have had to adapt during the pandemic and switch to a mostly virtual format, with fewer in-studio guests and performers for the annual ONTV Food Drive for Oxford/Orion FISH pantry. Locke began each day of the weeklong telethon on the food drive ‘stage’ with an introduction and summary of the drive’s progress. LOR photo/Jim Newell.

It’s not a surprise to Orion Neighborhood Television Executive Director Ian Locke that the Orion community did what it usually does and helped make ONTV’s Food Drive last week a success, even in the midst of an ongoing pandemic.

The 12th annual ONTV Food Drive raised about $7,100 for the Oxford/Orion FISH Food Pantry, said Locke. The goal at the start of the food drive had been to raise $5,000.

“It went really, really well,” Locke said. “Our sponsors, we can’t thank them enough. We had 16 corporate sponsors this year, which is the most we’ve ever had. The giving from those sponsors was in amounts higher than we’ve ever had. Especially Canterbury Village, which came through with the single largest donation we’ve ever had of $1,000.”

This year, like last year, ONTV held a largely virtual food drive, with daily telecasts, studio guests in smaller numbers and food drop offs at the ONTV van in the parking lot of the Orion Center so people would not have to go inside.

“The community did what they usually do. The actual food donations came in steady all week,” Locke said. “This was a hybrid food drive again, due to the pandemic. So, we had an online GoFundMe portion and a physical food drive.”

In the past, the food drive had focused on collecting as many non-perishable items as possible to stock FISH’s food pantry shelves to overflowing.

People could drop off food donations to the studio and possibly get on air; volunteers would be unloading donations only to load them back up on to a waiting truck to be delivered to the FISH warehouse; and dance, musical and community groups would take turns sharing the stage with the ONTV crew and guests.

Even though the food drive was largely virtual this year and focused on monetary instead of food donations, people still dropped off a significant amount of food, Locke said.

“It’s hard to tell poundage-wise, but I’ll say the goal was to fill our ONTV production van and we were more than successful,” Locke said. “If we were to compare this year to past food drives, I’d say this was one of the most successful drives we’ve ever had.”

To donate to Oxford/Orion FISH, visit oxfordorionfish.org for drop off times, online donations and information.