ORION TWP. – The Oakland County Sheriff’s Office Search and Rescue Team used its hovercraft and a dose of TLC today to rescue an injured swan that was frozen to the ice on Voorheis Lake in Orion Township.

Residents living near the lake reported seeing the distressed swan on the lake on Wednesday unable to free itself and called for help when the swan was still there today. It was estimated the swan was on the lake for more than 24 hours, the sheriff’s office said 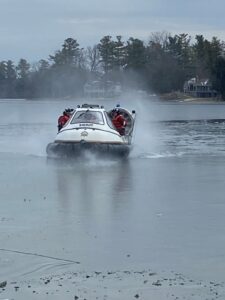 “Our team always rises to the occasion to rescue anyone or anything in distress,” Sheriff Michael Bouchard said. “I am proud of their efforts and optimistic that an animal rehabilitator will be able to nurse this swan back to full health to be released.”

The OCSO Search and Rescue team arrived on Voorheis Lake about 10 a.m. Thursday and used a hovercraft to break the ice around the swan in hopes of opening a path in the lake, allowing the swan to swim free.

When it became clear the swan was unable to help itself, the team used a blanket to cover the swan’s head and carefully removed it from the lake.

Sgt. Brian Burwell said the swan had an injured leg and was turned over to Oakland County Animal Control, which sought medical care for the bird’s injuries.

The swan is expected to be turned over to an animal rescue group for rehabilitation.