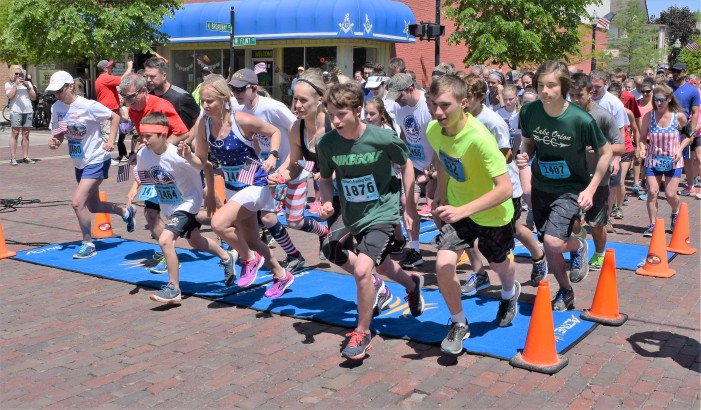 The LOHS Marching Band , under the direction of Michael Steele, entertained the crowd during the parade and also performed at the Orion Veterans Memorial ceremony.

Orion Township held its first Memorial Day 5K run/walk after the parade, with proceeds from the race supporting the Orion Veterans Memorial and the Lake Orion DDA.

“Which is huge for our first year. I’m very happy with the turnout. Everybody seems to be very excited and they love that it supports our veterans and that it’s right after the (Memorial Day) parade,” Bhatti said. “It’s a beautiful (race) route, so everything should be good.”

“What an amazing event to honor our veterans,” said Orion Twp. Supervisor Chris Barnett. “You don’t have to be a veteran to participate. We’d love to have 400 runners next year.”

Bhatti, Barnett and crew handed out flags before the race and each runner/walker got a commemorative dog tag upon crossing the finish line.

The race began at Broadway and Flint streets in the village, wound down M-24 to Heights Road, through the neighborhoods along Lake Orion before circling back to Odanah and finishing at the Veterans Memorial.

The race also featured a special award for Marvin Stevenson, age 82, a retired Marine, who was the oldest veteran to finish the race, with a time of 52 minutes, 49 seconds.

Memories made at Memorial Day races, parade added by scarroll on June 1, 2017
View all posts by scarroll →