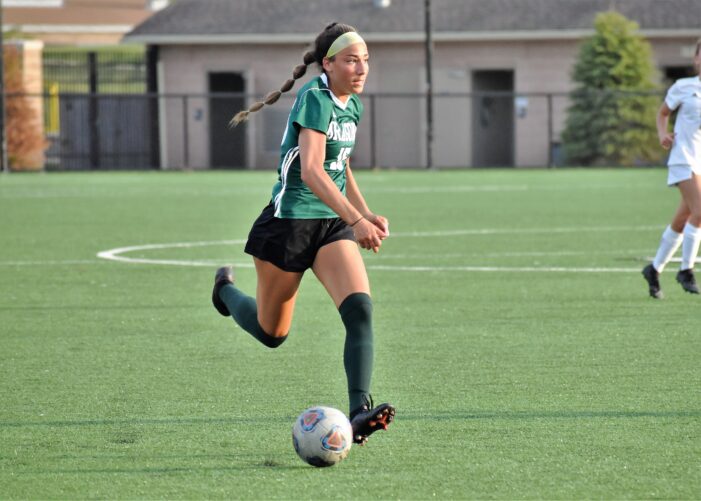 The Dragons will now play the Oxford Wildcats for the MHSAA District 5 championship at 7 p.m. Thursday at Lake Orion High School. The Dragons previously beat the Wildcats 2-1 on May 12.

Sophomore midfielder Erin Regalia scored the first and eventual game-winning goal for Lake Orion less than five minutes into the game against Flushing, giving the Dragons the 1-0 lead.

Throughout the rest of the first half and most of the second half the Dragons and Raiders battled back and forth with both teams getting scoring opportunities but failing to convert.

Flushing put the pressure on the Dragons and kept the ball in the Lake Orion defensive half for much of the second half of play. The Dragon defense, anchored by sophomore Brooke Blackstock and senior Megan Witt, repelled several Raider counterattacks and corner kicks.

While Flushing could not put the ball in the back of the net, freshman forwards Dylan Verlinden and Mackenzie Tabish teamed up for the insurance goal for the Dragons with 9:52 left in the game.

The Raider goalie charged toward Tabish, who passed the ball to Verlinden, who put the ball in the back of the net.

Freshman goalie Kylie Kopitzki played a solid game and got the shutout for the Dragons.

Lake Orion is 10-7-3 overall, according to MHSAA stats, and plays in the Red division, the OAA’s top tier.

Oxford advanced to the district final after defeating the Davison Cardinals 4-1 in the other semifinal on Tuesday. The Wildcats are 14-4-2 overall on the season and play in the OAA White division.

See the June 8 issue of The Lake Orion Review for full coverage of the district semifinal and championship games. – J.N.