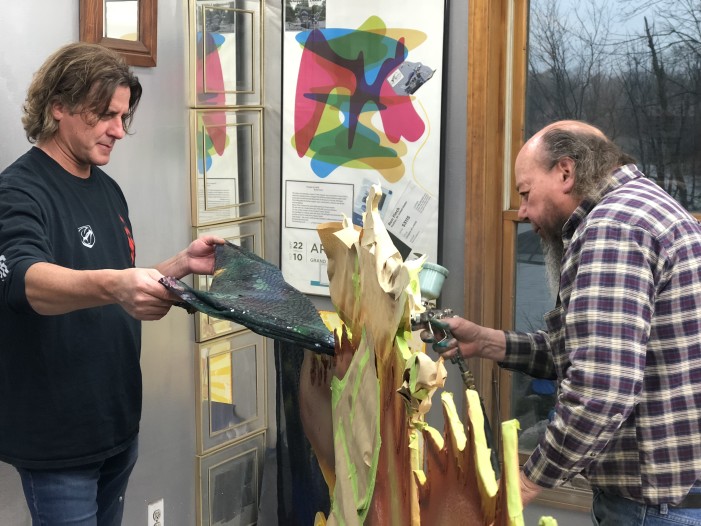 By Erica Soroka
Review Contributing Writer
For forty years, the iconic Lake Orion High School sign has been much more than just a navigation landmark to the education Lake Orion students receive. It not only represents the mascot, the Dragons, but also the school spirit that fills the town.
In 1981, Lake Orion High School and the Junior High East building shared a sign, which announced various school events; football games, parent-teacher conferences, and graduation dates. With the Junior High East building closing soon, Lake Orion High School needed its own sign, creating an independent identity.
Bill Kennis, a 17-year-old Lake Orion student, pondered on an idea that he hoped would impact not only the school, but also the community. The class of ’81 would donate a 9-foot long metal dragon to the school, to proudly represent its fierce mascot.
Kennis discussed the idea with his father, quick to find a way in which to create the Dragon so it wouldn’t weather during Michigan’s harsh seasons.
Professor Nelson Greer at The Center of Creative Studies designed the template on a 3/8-inch thick steel plate. The steel was donated by Lubinski Steel in Detroit and then flame cut by Moore Flame Cutting. Dupont donated the paint.
After discussing ways to bring the Dragon to life, Kennis decided to reach out to neighbor Melvin Miller, also a fellow classmate’s father.
“Mr. Miller was always tinkering with things in his garage and I thought he was really crafty,” said Kennis.
At 52 years old, Miller had never picked up an airbrush gun in his life but decided to give it a try, especially for such a fun and generous donation to the school.
“He (Kennis) showed up one day with about eight different colors of Dupont paint, which isn’t a forgiving paint to work with. I had the Dragon in my garage for a couple weeks just painting on it, having fun with it,” said Miller.
Once finished with the project, the Dragon sat upon the school’s signage for seven years before the new school’s construction began. It was during this time that Bob Bass and Dick Kast removed the rusted Dragon and placed it in storage.
In 2007, the Dragon was lent to a new festival in Lake Orion called “Dragon on the Lake” for promotion. Following the festival, the Dragon was lost.
It wasn’t until 10 years later that Chris Green discovered the Dragon.
After careful thought and consideration, he sandblasted and primed the rusted old metal in hopes of bringing the mascot back to life. Karin Miller, Miller’s daughter, had posted a status on Facebook asking if anyone had seen the Dragon her father had painted so many years ago, which in turn, sparked the new idea for the metal masterpiece.
With it already primed and prepared for a fresh coat of paint, it was time to find the perfect candidate to breathe new life into the Dragon.
It was then that Ron Finch, a custom metal/paint artist known worldwide for his work, was approached with the project. Known around Lake Orion for his custom metal work and vast painting skills, Finch was the man for the job.
Finch contacted long-time friend and fellow airbrush artist, Bob Soroka, to tag along on the creative process and enjoy an inspiring collaborative journey. Together, the two worked side-by-side for six weeks at Finch’s custom shop in Pontiac.
“This is a fun project to do together. I love doing this,” said Soroka.
Finch and Soroka had worked together on past projects but never fully collaborated on a single piece the way they had to this time around.
“It comes down to camaraderie. Me and Bob have known each other for a long time and we’re no bulls**t people. If I have a problem, I just say it. Bob and I, we think out of the box, I hate that saying, but we think differently than everyone else,” said Finch.
The process resulted in long nights, compromising on both ends and endless amounts of laughter and memories made, but the reward seemed to be the most touching to both Finch and Soroka.
“What’s the coolest about this project is the kids will see it more than anyone. It may inspire someone to be an artist and that’s the real importance,” explained Finch.
“Throughout all the years, it still amazes me how people don’t realize the potential they have. There’s so much cool art and mindset out there, hopefully this stirs that up in someone. Even if you do it for a hobby, like I do, so long as you love it,” added Soroka.
When it came time for the big reveal of the final modernized Dragon, there was no shortage of people in the Finch shop. Melvin Miller, his daughter Karin, Bill Kennis and other family friends who watched the Dragon come to life in the Miller family garage gathered around the sunlit Dragon in awe of the transformation.
When asked what Miller’s first thoughts were to his original piece being recreated, he answered honestly, with nothing but a smile of gratitude on his face.
“I am truly humbled by Ronnie’s work,” said Miller.
The Dragon will soon be exhibited at Lake Orion High School, combining the old and the new school to commemorate the history behind the school itself.