‘Light up the Night’ during Flare night on Lake Orion, June 29 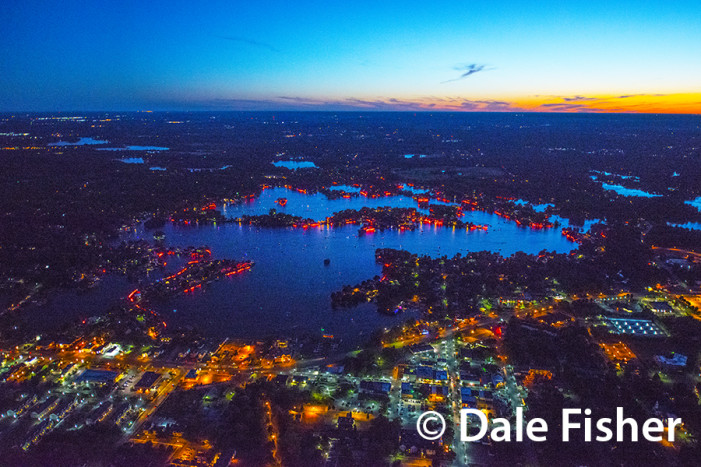 Flares are purchased by the Lions Club and sold to the public at Wonder Cleaners and Laundry, 835 S. Lapeer Rd.; Ed’s Broadway Gifts, 2 S. Broadway St.; and around the lake.

Flares have sold out in past years, so the Lions advise people to purchase flares early.

The Lions Clubs started in 1917 as a service club to help the disadvantaged.

At a convention is Sandusky, Ohio, Helen Keller was asked to speak. In her speech she challenged the Lion’s to become “The Knights of the Blind in the crusade against Darkness.” and they have been doing this ever since.

The Lake Orion Lions are using this event as a visual acronym for awareness of the “Prevention of Blindness.”

The Lake Orion Lions was started in 1938 and have sponsored the Flare Night Spectacular for the last few decades.

Two years ago, the Lions applied to the Guinness Book of World Records for “The most lighted flares lighted around a lake or shoreline.”

At dusk they recorded the record setting attempt using specialty photography and video equipment taking dozens of photos and videos to use to count the flares lighted.

Local cable channel ONTV also did a live filming of the shoreline. The record attempt application, photo, video,witness and Stewart statements evidence documentation have been submitted as required.

As this was a new category, the record is being evaluated and we will be notified soon as to their decision, Rice said. As of today the attempt is still under consideration.

The Lake Orion Lions Club has aerial photos of the event for sale for a limited time. Go to lakeorionlions.org for further information.

The Lake Orion Lions are grateful for the community support, said Rice.