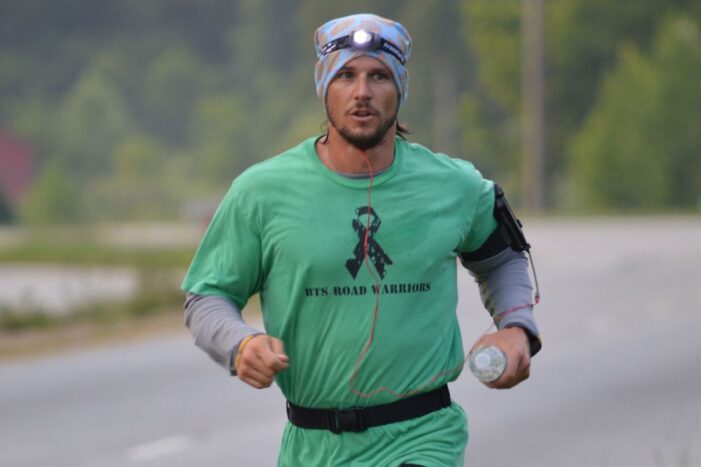 As of Wednesday afternoon, the day Lake Orion native Brian Thomas began his run, supporters had donated $4,445 toward the $100,000 goal to help those affected by COVID-19.

There are three race options for participants: a 5K, a 100-mile run and a 1,000-mile adventure race.

From Wed., June 3 to Mon. Aug. 31, 2020, people can sign-up and break up their runs, tracking their daily mileage while running in their own community until they reach their total.

Participants will get belt buckle bling and a green tank top with the Road Warrior logo on it.

To sign up for the virtual race go to: https://runsignup.com/Race/AZ/Tucson/COVIDCFV1000milerseries

For Lake Orion native Brian Thomas, not only does he seem not to duck anything, he seems incapable of taking on anything other than first-rate challenges.

Over the past two decades Thomas has fought cancer (his own and in support of others), cerebral palsy and battled thousands of miles of hard, unforgiving roads.

Thomas, a 1997 Lake Orion High School graduate and a retired ultramarathon runner is staging a comeback and set out on a journey of a thousand miles to help those affected by the Coronavirus pandemic.

“I will be running as many miles as I can from June 3 to June 29 in the Rocky Mountains to raise funds and awareness for the health and economic burdens related to the COVID-19 pandemic,” said Thomas.

“I will be starting in the Sabino Canyon, Arizona, and running with the goal of reaching Montana. The goal is to use the multi-state distance – approximately 1,000 miles in 26 days – to raise funds to support those affected, both immediately and peripherally, by the COVID pandemic. Charities and individuals will receive support through this event,” he said.

Thomas was born in Lake Orion and grew up on Park Island. After graduating from Lake Orion High School, he earned a degree from Michigan State University.

He now lives in Lake Worth, Florida and is a science teacher in the School District of Palm Beach County. He’s been a teacher for 18 years and also coaches track and field and cross country.

And while running a thousand miles through parts of four states may seem like an insurmountable challenge for a 41-year-old (Thomas is quick to point out that he’s 41 “only in years”), this is far from the first time that he’s faced a grueling opponent.

In 2002, he ran 1,207 miles from Lake Orion, Michigan to St. Augustine, Florida to raise funds and awareness for children with cerebral palsy.

Then in 2012, after spending four years mentoring two boys, the three of them ran a 1,387-mile relay from West Palm Beach, Florida to Lake Orion to raise funds for colon cancer patients.

In 2013, Thomas was lying in a hospital bed as Stage IV metastasized melanoma cancer wreaked havoc on his body. He battled back, fighting to beat cancer.

“I was diagnosed with cancer six months later and fought for my life – kicking and scraping – for a year-and-a-half. That battle with cancer and a conversation with God inspired me to train again and run across the country for cancer patients like me. In 2015, Brandon (Mercado) and I ran two separate routes, Florida to Washington D.C., which, ironically, was 1,200 miles even,” Thomas said.

“My passion is running and right now people need help so it’s time to do it,” Thomas said. “It seems like people are having a rough time. Either getting sick with COVID-19 and consequently passing away, as well as medical bills, funeral bills, the aftermath for their families.

“It’s very similar to when I raised funds for cancer patients themselves. Even when some of those people passed away, we would help take care of some of the funeral arrangements or some leftover bills that the family needed help with.

“People need help now and this is my way of doing it. It’s also my way of running across the Rocky’s so I can check that one off the list.”

The COVID Adventure Run 2020 charities: Thomas has chosen three charities to be the beneficiaries of the fundraisers, but plans to donate to individuals and businesses as well:

www.homelessangels.org, a street-based organization in Lansing, Michigan that helps the homeless population.

“I chose them because most of their funds were going where they said they were going, and, I’ve got to be honest, I thought pizza was a great idea,” said Thomas, who won’t distribute the funds after the virtual run ends in August.

Thomas said he knows that Lake Orion is a caring community and points out that many of the donors on the GoFundMe page currently live in or are from Lake Orion. And he has a message for everyone in his hometown.

“I miss everyone and when this is all over, I hope I can get home and see some Lake Orion Dragons. Lake Orion is just a really unique place that seems to produce different kinds of superhumans. It’s just a great place to grow up and live, and I hope everybody that can will help out, and that includes helping out in Lake Orion as well,” Thomas said.

Thomas is also concerned about the Americans who can’t get unemployment but they still have families to support, the businesses that are suffering due to the stay-at-home orders

“As has been stated many different times in many different arenas, the majority of Americans who live paycheck to pay check don’t have much financial room and they’ve been going months without work and they still need to pay bills.

He wants to highlight and thank the “heroes” who have made a difference during the pandemic – the doctors, nurses, police officers and grocery store workers and “Everybody that has toed the front line of what is really this modern-day war that is COVID.”

“I’m slightly biased, but the teachers who, at the drop of a hat, change a hundred percent of what they do so that they can make it work for the kids without question, without hesitation.

“There’s all kinds of different viewpoints on how extreme or how not extreme this virus is, where it came from, the novelty of it all, figuratively and literally. But I’m not interested in the back-and-forth. I just know that people need more help now…people need help all around: this is how I’m trying to do it.”

For his run across Arizona, Utah, Wyoming and into Montana, Thomas will be getting a little help from his friends.

Normally, Thomas requires that he and his athletes train for six to nine months for an ultramarathon, but his timetable has been compressed into one month. Still, he’s prepared for the distance and plans on starting out “conservative” for the first five days.

“My first week’s going to be a split 20 miles a day” on Wednesday through Saturday, he said. “On Sunday I’m planning on just taking off and after, as long as everything seems to be falling into place, I’ll go ahead and start ramping up the miles and try to push as many miles as I possibly can.”

Thomas was originally planning on doing the run without a support team, but then had friends volunteer to go along.

“I was going to do it unsupported. I actually had several people from Michigan who have since moved to Arizona – old wrestling buddies of mine – who live out here now and they’ve been out here for 15 years, call and say, ‘Hey, can we crew you?’

“After getting a couple of other ultramarathoners basically telling me I was going to die (if I went) un-crewed, I said ‘Ah, sure. Yeah.’”