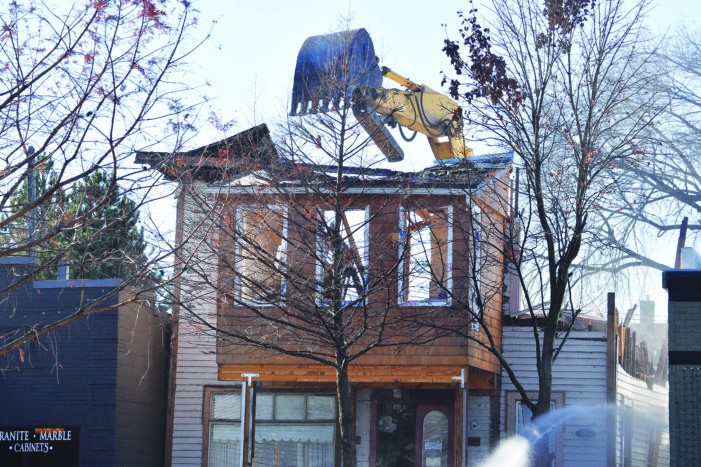 On Monday, work crews dismantled a historic home at 35 N. Broadway St. in downtown Lake Orion. The home, built in 1894, caught on fire on Jan. 14 and had sat vacant since. At the time of the fire the home was a boarding house with nine tenants, all of whom got out safely. Photo by Jim Newell

By Jim Newell
Review Editor
LAKE ORION — For more than 128 years a house has stood at 35 N. Broadway St. in downtown Lake Orion. A home for individual families and, most recently, a home for boarders who found family among their fellow tenants.

Now that once richly inhabited home is a pile of debris and the lot where it stood a soon-to-be vacant hole on the village landscape.

Work crews demolished the home on Monday and began hauling away the wreckage on Tuesday.
Demolition was supposed to begin on Sunday, but equipment issues delayed work for a day. Broadway Street between Shadbolt and Flint streets was closed during the demolition.

Homeowner Cordell Krol bought the house in 2002 and ran it as a boarding house until the fire.
The house caught fire shortly before noon on Jan. 14, 2022, smoke billowing from the house in great dark clouds, rising into the bright afternoon sky, hanging ominously above the businesses and homes in downtown Lake Orion as firefighters fought to keep the fire from spreading.

All the tenants who were in the home at the time of the fire got out safely. It’s believed that the fire originated in the basement and was caused by the furnace.

On Monday, Krol, 70, said he does not plan to rebuild on the site and has already received multiple inquiries from people interested in purchasing the property. He currently lives in another community with family.

The home had sat as a dilapidated burnt husk, with police caution tape around it and a note on the door telling people to keep out.

After sitting in that condition for 10 months, Lake Orion Police Chief Harold Rossman said it needed to come down. Rossman said they had been working with Krol and understood that he was working with his insurance company to arrange everything.

But with winter weather setting in, Rossman said he was concerned that heavy snow might collapse the structure.

Orion Township Fire Chief Robert Duke was on the scene with his firefighters and command staff for the duration of the fire. Besides Orion Township Fire Department, fire departments from Oxford, Addison and Oakland townships responded and assisted. 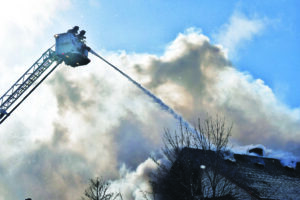 And while firefighters bombarded the house with water and stopped it from spreading to the neighboring businesses, it did take a while to get the fire under control.

“It did (take a while), because of the house being built in the late 1800s, the balloon construction made it very difficult to compartmentalize with the configuration of the nine rooms in the house,” Duke said in January. 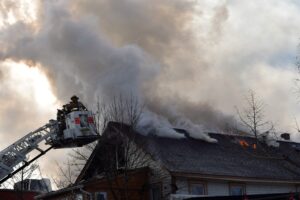 Balloon frame homes are those that use long wood studs for framing. It was the most common type of framing from the 1880s to the 1930s, according to the Craftsman Blog.

Balloon-frame homes present “unique firefighting problems because it lacks horizontal fire stops between the studs inside of the exterior walls,” according to firerescue1.com, which provides information and resources for firefighters. Balloon-frame homes allow for fire to spread unimpeded from the basement to the attic in a matter of minutes.

A historical marker on the home states that the home was built in 1894.

This is at least the third major fire in downtown Lake Orion in the past 18 years.

Nearly six years ago, shortly after 8 a.m. on Jan. 28, 2017, fire ravaged the Lake Orion Pet Centre building on the corner of Anderson and Flint streets. The rubble of that building – which had apartments above the first-floor businesses – was later demolished and today there is a parking lot on the site.