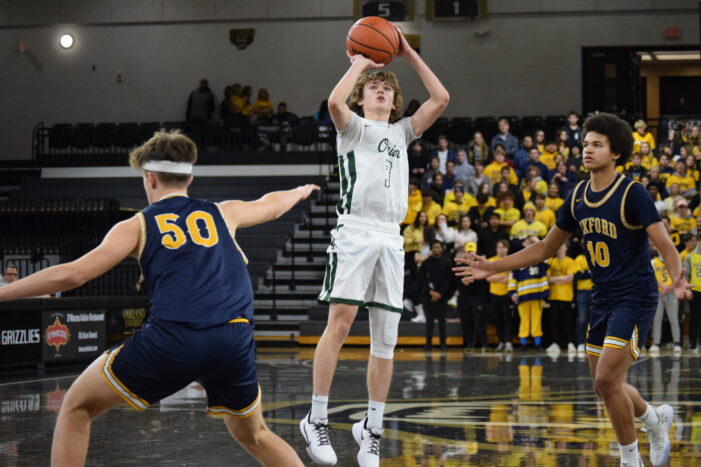 Leading the Lake Orion Dragons boys’ basketball team in scoring in 2019-20 at 16 points per game, guard Cam Sutton announced his commitment to the Rochester University Warriors on May 1.

Sutton, who will graduate with the Class of 2020, will begin his collegiate career as a member of the Warriors’ “reserved team,” – like a junior varsity squad. Coached by Quin Rice, who doubles as an assistant coach on Klint Pleasant’s varsity team, Rochester’s reserved team largely plays a collection of other schools’ reserved teams and junior colleges.

“The reserved team is a good way for us to get guys into our program,” Rice said.

While the Dragons’ Michigan High School Athletic Association (MHSAA) District No. 5 postseason run was met with an abrupt end as a result of the coronavirus (COVID-19) pandemic, Sutton played some of his best basketball in the month of March, scoring a career-high 32 points – including 8-for-8 from three-point range – in the team’s district quarterfinal victory over the Romeo Bulldogs on March 9.

In addition to his 16 points per contest, he also averaged two assists and was a willing defender against often larger competition, earning All-Oakland Activities Association (OAA) Red Division honorable mention from the league’s coaches on March 19.

A testament to the talent in the area, Sutton was, despite these impressive statistics, largely unmonitored on the recruiting trail.

“I talked to three or four schools from my junior year until the end of my senior year,” Sutton shared. “Rochester ended up being the only one to extend me an offer. The other schools showed some interest, but they (Rochester) were the only ones to make me an offer.”

Rice was also Sutton’s primary recruiter, a relationship built when the pair met at an elite camp in the summer of 2019.

“I liked a couple of different things about Cam,” Rice began. “But the first thing that stood out was he always seemed like a team player.

“He was on my team at that camp, so I got to coach him, and he was positive and unselfish with the rest of the guys. That stood out because those elite camps tend to be more of selfish environments because guys are there to showcase their skills, but he always seemed like a team guy.

“I think he wants to defend, too, which is big in our program. Defense is our calling card and he gets after it and wants to shut his guy down.”

Sutton is currently undecided on what he plans to study at the university but is considering accounting or something else in the business field.

“I talked to Coach Rice a few times on the phone and texted him a lot,” Sutton said of how his recruitment began to unfold.

“I went to the campus and he (Rice) showed me all around on my visit and talked about all the different programs with me. He really helped to explain everything, he’s a really cool guy.”

Playing both guard spots under head coaches Jim Manzo (2018-19) and Joel Schroeder (2019-20) during his time at Lake Orion, Rice thinks Sutton projects as a combo guard at the next level, as well.

“He can handle the basketball,” Rice said. “Handles pressure, sees the floor well, he can play a true point guard spot.

Listed at 5-foot-9, Sutton was often trusted with handling the basketball late in games for Schroeder’s squad due to his ability to limit turnovers and well above-average free throw touch.

“I see myself as a combo guard because I can shoot the basketball, that’s my biggest strength,” Sutton said. “I do prefer to play point guard, I think that’s where I’m at my best, but I can play shooting guard, too. I’m hoping I can play the point at Rochester.”

Exemplified by the Warriors’ 2019-20 roster, the program has long placed an emphasis on recruiting local talent. 12 of the 19 players on last season’s roster were from the state of Michigan, including OAA graduates Armand Cartwright (Bloomfield Hills) and Denton Smith (Clarkston).

“There are a lot of good, small college options in this state, so, the market for recruits can be pretty competitive. Due to that, it benefits us a lot of the time to stay local. Guys that grew up in Oakland, Macomb and Wayne counties, a lot of them know about the university and our program, a lot of them have even played at our summer camps.

“Our best player last year (Cartwright) averaged 21 points per game and was an NAIA All-American and his house is 15 minutes from campus. There are a lot of players, a lot of talent in this area, it’s always nice to tap into that.”

Schroeder and the 2020-21 Dragons will be tasked with replacing not only Sutton, but 2020 forwards Dylan Boedigheimer and Drew Van Heck, as well. Boedigheimer, one of the OAA Red’s top-five rebounders in 2019-20 at nine per game, plans to attend Grand Valley State University in Allendale, while Van Heck will be joining the Western Michigan University Broncos baseball program as a preferred walk-on.