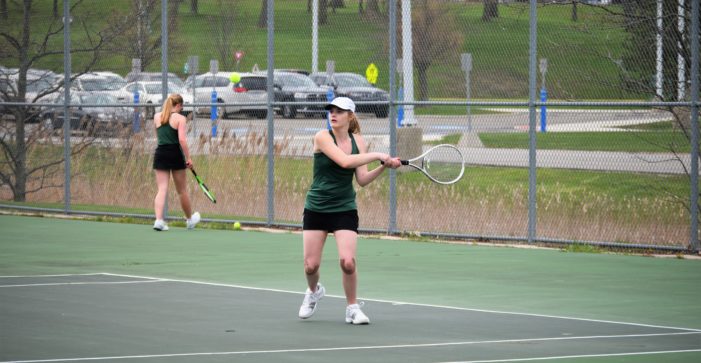 On May 7 the Dragons defeated Dakota High School 7-1.

Luna, Murray and Merrell took wins in each of their Singles matches.

Doubles teams of Goeke and Desai, Tang and Yim, Olejnik and Quinn and Bies and Nelson scored wins for the Dragons as well.

The OAA White division tournament took place on May 11. The Dragons finished in fifth place with 32 points.

The ladies take on the Regional Tournament on Thursday at Stoney Creek. — M.K.

The Lake Orion girls soccer team traveled to Groves High School for an OAA Blue match on May 8 tying the Falcons 1-1.

In the physical and back and forth game Melissa Normand scored the tying goal in the second half on a freekick.

The ladies destroyed Summit Academy 8-1 on May 9.

The Dragons had control of the ball for most of the game while their defense played tight holding Summit Academy to only one goal.

Morgan West and Grace Cady each scored two goals while Annamarie Fosmoen and Sarah Hoenshied added one a piece. Normand scored off another freekick and Kacy Lauer scored a header off of a corner kick.

On Friday the ladies headed to Romeo High School tying the Bulldogs 1-1.

Halfway into the first half Romeo scored the first goal of the game.

Cady answered back with two minutes left in the first tying up game.

The girls are now 8-4-3 overall. They take on Oxford on Tuesday after Review press time. — M.K.

The boys Lacrosse team won their forth OAA Red division game in a 11-7 victory against across town rival’s Clarkston High School.

Leading the Dragons in scoring was Grand Valley State commit Kyle Loken with four goals. Also contributing to the offensive charge were Dakota Zehler and Max Touhy with two goals and Sam Parillo with one.

The boys traveled to Grosse Pointe North High School on May 4 securing a 19-1 win over the Norsemen.

Zehler, Hunter McCarty and Willy Houser had three goals apiece. Touhy, Dario Ruffini and Griffin Jacques each had two goals and rounding out the Dragon scoring were Loken, Alex Brueckner, Justin Gingell and Kade Manzo who scored one goal each.

On May 7 the Dragons defeated Detroit Country Day 7-4.

Parillo led Lake Orion in scoring with four goals followed by Zehler with two goals and Loken with one goal.

May 9 the boys dominated Bloomfield Hills High School 12-2 to remain undefeated in the OAA Red.

Parillo again led the Dragons on offence with five goals while Loken had three.

Rounding out the scoring for Lake Orion was McCarty, Houser and Cady with a goal apiece.

The Dragons scored another big win over Vicksburg High School 14-1 on May 11.

Rounding out the Dragon scoring was Loken and Zehler each with two goals and Gingell, Parillo, Dario Ruffini and Touhy each with a goal a piece.

The boys added another division win to their resume after destroying Troy Athens 19-1.

The win signified the team’s fourth division championship and the fourth year in a row that the team has been undefeated.

Brueckner had a season high of six goals. While Loken and Cady followed on with three goals. Also scoring for Lake Orion were Zehler and Dario Ruffini with two followed by Parillo, Jacques and Manzo each with a goal.

The boys take on Brother Rice at home on May 14 after Review press time. — M.K.

On May 6 the ladies headed to Mercy High School falling 21-4.

May 10 the Dragons traveled to Rochester Adams High School to take on the Highlanders.

The close scoring game ended with a 10-9 Dragon victory after a Lake Orion goal during overtime play. — M.K.

The Lake Orion softball team took on the undefeated, no. one ranked school rival Clarkston High School Wolves away on May 8.

In game one of the double header, the also undefeated Dragon underdogs handed Clarkston their first loss of the season with a 7-5 victory over the Wolves.

The Dragons kicked off the scoring at the top of the first inning after an RBI (Run Batted In) double by Sara Conley.

Clarkston answered back in the third inning plating four runs putting the Wolves up 4-1.

Courtney Kolp managed an RBI single in the fourth to get the Dragons another run while Clarkston plated another run.

Paytin Shadaia hit a two run homer at the top of the fifth bringing the Dragons within one point of the Wolves.

Rose Babicz kicked it off the seventh and final inning with a base hit followed by another base hit by Tessa Nuss. Shadaia hit a two RBI triple putting the Dragons ahead. Conley rounded out the scoring with an RBI base hit.

Game two was not as kind to the Dragons with the ladies losing 10-1.

Nuss went 2-2 with a walk and Paytin Shadaia went 3-3 leading the Lake Orion on offense.

The ladies are now 9-1 in the OAA Red. They take on Avondale on Tuesday after The Review goes to press. — M.K.