Downtown demolition to begin this summer for Anita’s Kitchen 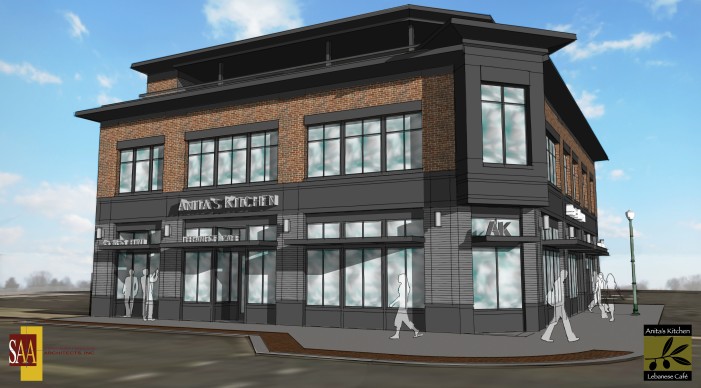 By Meg Peters
Review Co-Editor
Kibbeh nyeh, made of freshly ground sirloin of lamb, cracked wheat, minced onions and spices, is served raw, and has been for generations.
“The steak tartare of Lebanon!” as the Anita’s Kitchen menu describes it. Kibbeh nyeh is just one of the many recipes handed down from Jennifer Wegryzn’s parents, Anita and Pierre, who lived in Tripoli and Hassroun of northern Lebanon.
Jennifer and her husband Joe have continued their visions and traditions with their menu at Anita’s Kitchen, and are opening their second location in downtown Lake Orion next summer.
The Village of Lake Orion Planning Commission gave final approval for site plans of their new restaurant to be located at 45 W. Flint St., replacing the Celtic Cove & Catholic Bookstore.
The four business partners of the venture presented their initial plan to remodel the current building back in February. The new plan, to demolish and rebuild, was approved last Monday.
The three-story building will offer a lunch and dinner dining atmosphere, catering services, a large take-out area, and bars and seating on each level, not to mention two office spaces on the second floor.
The restaurant is expected to create 30 to 35 part-time and full-time jobs in Lake Orion.
Joe is excited to bring Anita’s Kitchen to Lake Orion, north from its primary location on Woodward Ave. in Ferndale.
“The reception that we’ve received has been incredibly warm and engaging from the city as well as the residents and it gives us the same confidence coming in to Lake Orion as we had in Ferndale, and the last eight years in Ferndale it’s been an unbelievable success,” he said.
Joe and Jennifer have been involved with the Lake Orion community for years, having watched their kids grow up at Upland Hills School in Oxford.
“I think having met so many families that go to the school out there, and after catering a number of events [in the area] it was always clear there was an opportunity that what we do may be a very good fit for accentuating the growing restaurant scene,” Joe said.
What they do—offer fresh and healthy food options utilizing over 35 years of restaurant experience—is a bit of a different menu from other restaurants downtown.
“The nature of the Mediterranean diet is certainly salad focused with low fat, high protein contents,” he said. “When you think of hummus, chicken, quinoa—we are gluten free, vegetarian and vegan friendly and accommodate many different dietary limitations while at the same time fulfilling those who have no limitations.”
Along with many of the traditional dishes involving beef, lamb, chicken, falafil, ground chickpeas, eggplant, lentils, parsley, onions, crumbled feta, and pickled vegetables, the menu also offers buffalo chicken wings, pita pizzas, pita sandwiches, chopped salad and much more.
People from Flint, Grosse Pointe, Farmington and many more cities travel to his Ferndale location, and Joe has the same vision for Lake Orion—to attract customers from Rochester, Oxford, Clarkson and beyond.
The nearly-$2 million project will offer 50 to 60 seats on the first floor for dining in, along with a carry-out section, where customers could potentially eat their take-out food, and a bar. The second floor is geared to a slightly different audience, offering about 50 seats for small events such as bridal showers or business meetings and includes a bar. Also on the second floor will be two 650-sq.-foot office spaces for lease.
The rooftop level will overlook downtown Lake Orion with 50 to 100 seats. A large canopy will cover about half of the rooftop, giving patrons a chance for both sunlight and shade. This floor will offer drinks, and a smaller menu, Joe thinks, and could serve as a potential waiting area for customers.
Because it is a new-build, Joe, and his business partner Jack Kobliska, who owns other properties in Lake Orion, had a little freedom when it came to the design.
SA&A Architect Scott Reynolds is the primary designer of the restaurant, and said the three-story building will be “a big element coming into the downtown.”
“Some of the branding we are still working on, but we are trying to find the balance between a creating a new building in the downtown, but also within an historic downtown,” he said. “Many of the proportions, scale, overhangs and architectural features are inspired and derived from historic form, but there is going to be some metal, and a little more modern taste, a compromise between the both.”
Another option Anita’s Kitchen’s owners are thinking is to partner with the Village of Lake Orion to continue the streetscape down to Lapeer St. Right now the portion of the site along Lapeer St. is grass, and the hope is to partner with the Village of Lake Orion, who partially owns that section, to continue a sidewalk around the corner. A second entrance would be located there for takeout, and to allow tenants of the office space a separate entrance to their suites.
The main entrance will be located off of Flint St., and two staircases, and an elevator, will allow patrons to visit the second and third levels.
Reynold’s goal is to promote walkability in the downtown.
“When you start looking at other places—Ferndale, Royal Oak, Rochester, Birmingham—the reason it works is because there is parking spread throughout and people are willing to, maybe get an appetizer at Anita’s and end up at Lockharts for desert. So there is a flow, an in-between, and that’s what creates the uniqueness of the businesses downtown,” Reynolds said.