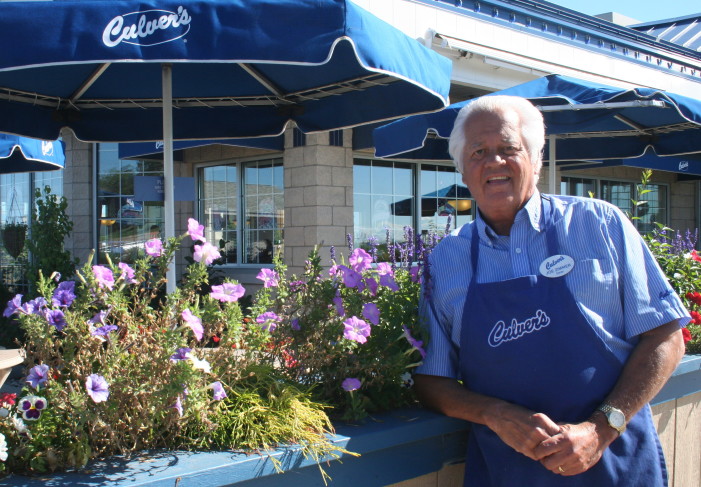 By Cathy Kimmel-Srock
Review Staff Writer
It’s not just ButterBurgers that customers can find at Culver’s of Lake Orion but also award-winning curb appeal, cleanliness and customer service.
Owners Joe and Sue Zimmer and their location, located at 4963 Interpark Drive North, off of M-24, recently received the Pride award, given yearly by Culver’s. This is the third time this location has received the award.
According to Zimmer, the Pride award is based upon curb appeal, landscaping and what the guests see when they enter the establishment in regards to decor and cleanliness, as well as the appearance of crew members, friendliness and hospitality.
Corporate visits the establishments and seeks comments from customers in their determination of the winner. It is an award given nationally, and one is awarded per state. There are around 50 locations in Michigan, he said.
Zimmer explains that a franchise business consultant visits the locations in June to determine if a location qualifies to be considered. Then, another visit occurs on Aug. 1 to make the final determinations.
He credits his staff for their success at this location. “I can’t say enough about the employees that I have,” said Zimmer. “They are just awesome and a lot of them have been with me since I opened over eight years ago.”
Culver’s of Lake Orion recently celebrated their eighth birthday on July 25 with $1 ButterBurgers. According to Zimmer, it was the busiest day they’ve had since their opening. Even with the M-24 construction, they sold around 6,700 burgers that day.
“We have a lot of loyal guests,” he added. “They know how to get here.”
It’s not just the employees and customers that are loyal, but also the Zimmers to the Lake Orion community. In addition to being involved in a wide array of community events and fundraisers, when Joe decided to come out of retirement to open Culver’s, it had to be in Lake Orion, their longtime home for over 40 years.
“I missed the business,” he said. “The biggest criteria we had was trying to find a location in Lake Orion.”
It’s all paid off for Zimmer and his wife as their location has accrued several awards and a loyal following, having been the top operation in their region (23 stores) many times in their eight years.
“Thank you for your loyalty and support,” he added. “Come in and see us.”
Culver’s of Lake Orion offers their weekly car shows on Tuesday evenings, kids’ night on Wednesdays, and Thursdays this summer have featured outdoor movies.