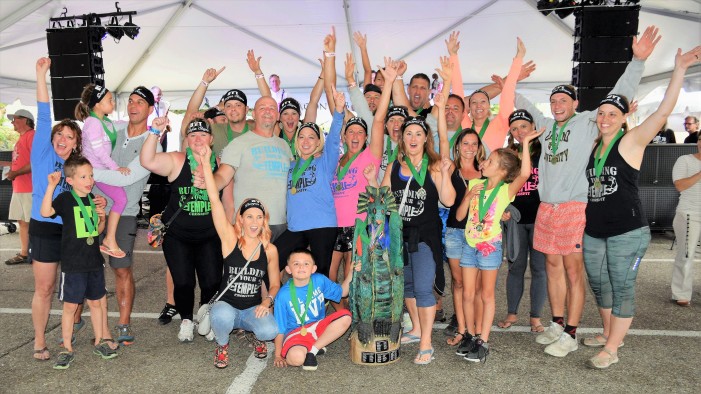 Dragon on the Lake Festival breathes fire into LO

The Orion Art Center’s Dragon on the Lake festival wrapped up another successful run on Sunday. The four-day event kicked off with a kids’ foam party in the Dragon Pub on Thursday and concluded on Sunday in the Pub with the awards presentation.

The ever-popular Dragon Boat Races on Sunday are the culmination of the festival, with a new champ taking home the “Rob” Dragon Boat Trophy; and new this year was the Brave the Wave jet ski races and freestyle event on Saturday, which became an instant fan favorite.

Vendors – art, business and community groups – lined the streets in downtown Lake Orion on Saturday and Sunday; while the Dragon Pub featured 80s hard rock band ROCKSTAR on Friday and The Square Pegz on Saturday.

“We don’t know the (final) numbers yet, but weather-wise this is the best weather we’ve had in, I don’t know how long. It seems Lake Orion always gets that puddle of rain (during the festival),” said Alana Hart, an Orion Art Center board member.

Hart and fellow Art Center member James Jenkins were the event organizers, along with several of the board members and Executive Director Janice Price.

“Overall, I think that everybody was happy. Everything that we added this year was a big hit, and everybody played safe, played nice and that’s what makes a good community event, there were no bad apples in the bunch,” Hart said.

Hart thinks the Brave the Wave jet ski competition will be back next year. “The jet ski show was just awesome. I thought it was the perfect way to add another event on Lake Orion, on the water.

“The Dragon Boat race, if you’ve never raced, it’s really hard to understand how hard it is and what it really entails. So, I think the jet ski races are a really nice family event. Anybody can come out watch and enjoy it, and those guys are so talented, they were speeding, whew!”

The 9th Dragon Boat Race final was one of the closest in the history of the event, with 1.5 seconds separating the top three teams.

Team Urassis Dragon finished in third place. The team has been in the final race and come up short for three years in a row.

Defending champions, The Birney Directive, finished in second place, only a half-second behind new race champs Building Your Temple (BYT) CrossFit from The Legacy Center in Oxford, who took home the “Rob” Dragon Boat Trophy.

Of course, in true Dragon on the Lake tradition, the competitors had to wait more than two hours before race officials announced the winner at the awards ceremony.

After, hearing the results, Team BYT exploded in celebration, the triumphant culmination to a hard day’s effort.

Team captain Candy Buchan, elated after the victory, said teamwork was the key to the victory.

“That was amazing. I wasn’t really sure we were going to win so we were kind of staying humble there for a minute, but that was awesome – we came through and pulled it off,” Buchan said. “We didn’t give up. We were ahead of them in the beginning, then they started gaining on us. We all said this: we pulled it out of our heart and souls and finished strong and never gave up and it was enough.”

Team BYT has competed in the Dragon Boat Races in the past, finishing in second place twice, but didn’t make it to last year’s races because of a prior commitment.

Buchan said the appeal of the Dragon Boat Races is a day of fun with family and friends – and for the ultracompetitive BYT team members, the chance to race.

“For us, it’s working as a team. We work out together every day, we love to do team events like this, so even if we weren’t competitive it was definitely more of a team-building, bonding activity,” Buchan said, adding that capturing the trophy is still the goal. “We probably couldn’t be more competitive than we are, so winning is right up there.

“Honestly, the overall experience with all the teams is great. Everybody had good sportsmanship, it was fun meeting other people, great team bonding, all of our families and kids came out, it was just a great day,” Buchan said.

And now that the team will have its names on the Dragon Trophy – and the trophy in their possession until next year’s race – Buchan said the team has no plans relinquishing the trophy.

“We are definitely going to be back next year. We are going to defend our title.”