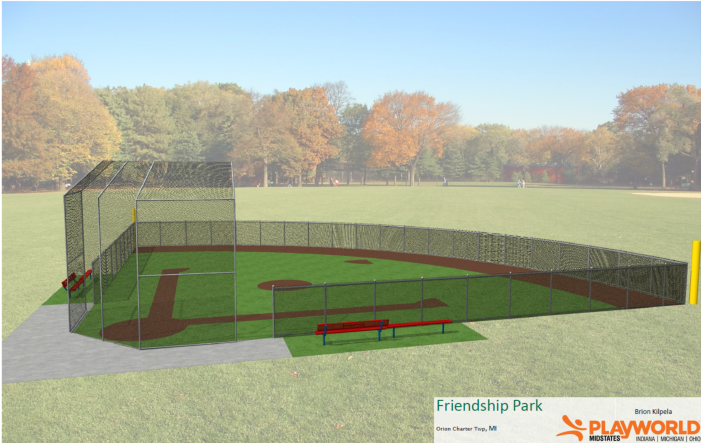 By Jim Newell
Review Editor
The crack of the bat, the roar of the crowd, the high-fives and cheers – these are the sounds that embody the quintessential game of baseball.
Orion Township is in the final week of raising funds for the proposed Orion on Deck field at Friendship Park, an all-inclusive adaptive baseball/softball field fully accessible to special needs individuals, disabled veterans and able-bodied players.
But to make this dream a reality, the township needs to raise $150,000 to construct the field. Total donations and pledges thus far are just over $75,000, said Orion Township Supervisor Chris Barnett.
“Most of these campaigns, the last week is when they raise 80 percent of their funds, so we’re hoping to raise $60,000-$70,000 in the next week,” Barnett said. “This is such a great project. Whether you have $5 or $5,000, the more names we put in who helped make this field happen, the better. This is in a public park in Orion Township that can be used by people all over the region.”
Many of the communities in North Oakland County – Orion, Oxford, Clarkston, Rochester, Waterford – have adaptive softball teams for individuals with special needs who will play on the new field next summer.
“We’ve partnered with Independence Township and they’ll be offering some of their therapeutic programming here,” said Aaron Whatley, Orion Township parks and recreation director. “This field needs to be used all the time, whether it’s our community or other communities. We are open to that.
“The idea is, okay, you want two nights a week with your adaptive league, bring them over, use it. There’s fully accessible restrooms, wi-fi. The site will be wheelchair accessible to get to the field.
“If Brandon or Oxford want to bring over an adaptive team, sure. If it’s used seven days a week, every hour of the day that’s cool, that’s what it’s about,” Whatley said.
A private donor is willing to match up to $50,000 of donations from the community, so Orion Township officials are making a big push in the final week of crowdfunding to match that pledge dollar for dollar.
Orion Township is running the funding campaign through Patronicity, a crowdfunding website similar to a GoFundMe account, except that Patronicity does not charge a service fee. GoFundMe can charge up to a 12 percent fee on donations.
The Lake Orion Wiffleball Association donated $20,000, while online donations through Patronicity have reached $24,000, so far.
“With this, all the money comes right to Orion Township,” Barnett said. “We have a plan, we have a spot, we have the township board behind it.”
The LO Palooza Festival – run by the Daisy Project – on Sept. 9 will donate all its proceeds to Orion on Deck. See page 3 for the related story.
The Daisy Project of Michigan is a nonprofit organization committed to providing medical equipment and recreational items for special needs families.
Friendship Park – where the proposed field will be built – is on the corner of Baldwin and Clarkston roads and already has two wheel-chair accessible swings, a seesaw and an inclusive whirl merry-go-round for people with special needs.
“There’s really nothing in Northern Oakland County like this,” Whatley said. “We have individuals from Ontario who come over to use our inclusive playground.”
Whatley estimates that construction on the new ballfield will begin in early October. The infield will be a soft, spongy turf; dugouts and benches will be handicapped accessible; and there will be a wheelchair path to the field.
“If you’re friends with me, you can expect a phone call or text in the next week because I’m pushing for everyone to support it,” Barnett said. “And we’d love to have any civic groups – the Lions Club, the Rotary – come on board. We want this thing to be community-built: there’s more buy-in, there’s more pride in it that way.
“If you donate $1,000 or more, you have a permanent sign on this field. Which is something that is really cool because people are going to be coming from all over the region,” Barnett said.

The genesis of Orion on Deck
“We have this amazing project that came to us at the Lake Orion annual wiffleball tournament in 2016,” Barnett said.
After the Lake Orion Wiffleball Association played its annual tournament at Vanden Boom Field on Lake Orion last year, association member Ryan Skalnek approached Barnett and said the league might have to find a new place to play, or fold.
So, Barnett, Whatley and Skalnek met at the proposed field at Friendship Park and “begin brainstorming, and dreaming,” Barnett said.
“And then we started talking with Kristi Schons of The Daisy Project and began thinking, we want to make it more than just a wiffleball field, we want to make it something that would tie-in with all the other work we’ve done at Friendship Park. So that’s how the idea was born,” he said.
“The idea for this field was not just special needs individuals, but disabled veterans, able-bodied individuals; having a field for every single person to be able to participate,” Whatley said.
“We wanted to raise the money to donate to the field, not so that we would have a place to play, we wanted to give back to the community,” Skalnek said. “We’ve had a great time raising money for it. Thank you to everyone who supported us.”
“For the last 12 months, every penny that they’ve raised they’ve written a check to this field, which is remarkable,” Barnett said.
The Lake Orion Wiffleball Association (L.O.W.A.) grew from a small group of high school friends into a non-profit organization with the purpose of raising awareness and money for organizations that support veterans and military members.
Since 2010, the L.O.W.A. has raised and donated over $65,000 to support veterans and military members through several veteran organizations including: The Orion Veterans Memorial, Wins for Warriors, Operation Homefront, Give an Hour, and The Desert Angel, according to the L.O.W.A. Facebook page.