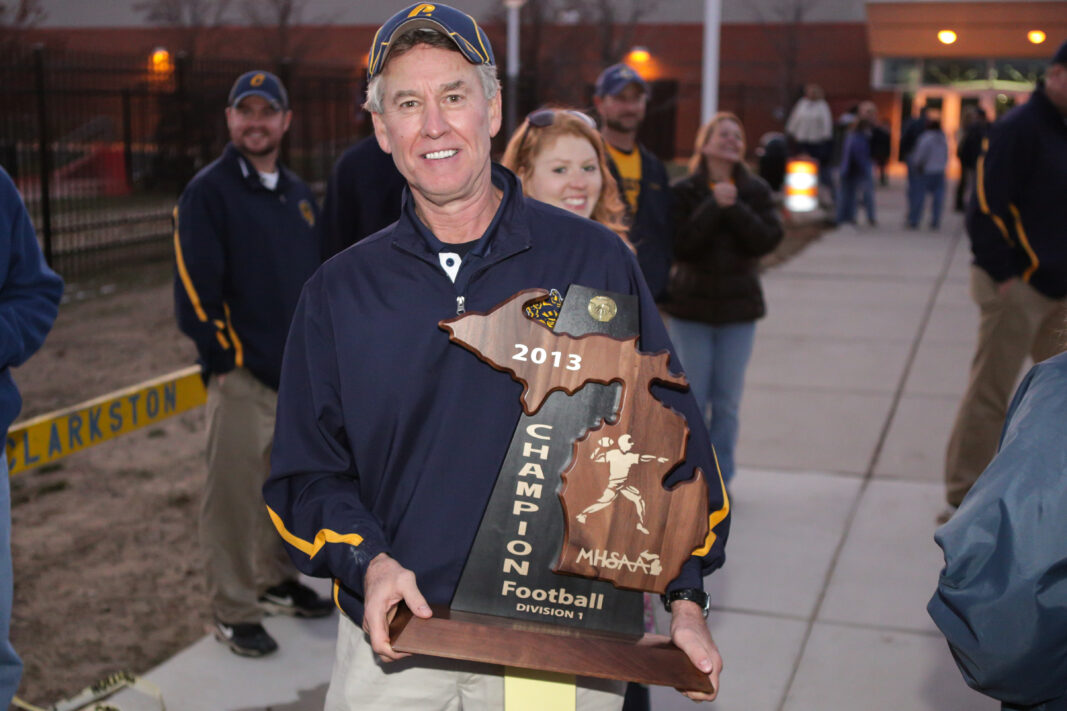 Growing up on the mean streets and dirt roads in the ghettos of Clarkston (aka: Independence Township) in the 1970s was a good thing. There were lots of woods to tromp around in, fields to ride bikes in and lakes and creeks to fish and swim in.
And, there were enough kids to play pickup games of baseball and football. Football. I never played football for the Clarkston Chiefs, I believe they told my dad I was too “husky” for their teams. That might have been in the sixth grade, I don’t rightly remember. But, what I do remember from growing up in the said ghettos of Clarkston meant I attended the less respected of two junior high schools in the Clarkston school district, Sashabaw.
I remember playing football in the eighth and ninth grades. I also remember a young gym teacher who went by the name of Mr. Kurt Richardson — KR to thems that knew him. I remember him stopping me in the hallways of Sashabaw Junior High and not because I was late for class, or my hair was askew or because my clothes didn’t fit all that well. While all those things were true, he stopped me with a yell, “Rush! I can’t wait until you get to high school to play football with Coach White. It’ll be great!”
I believed him.
But, he was wrong.
I made it to high school and he and Gary Warner coached our 10th grade, JV football team (undefeated that year, I might add). Coach White was whisked away from the district and I never played for him. I did play under the tutelage of Coach Wyniemko and, among other assistant coaches, KR. KR was always, how do I say this?
Energetic.
“If you’re puking, you’re not trying hard enough! You’re not giving it your all!”
Yup, he screamed that during a hot and humid two-a-day practice in August.
One year we had an awards night for the football team. One guy got the Most Valuable award. Another Most Improved. There were the normal Offensive and Defensive awards doled out to deserving young men who were all called up on stage to accept their awards. Seemed like there were 50 awards for varying degrees of gridiron prowess, of which I got none.
After all those good awards were given out and the night was about over, KR had one more trick up his sleeve. With a grin on his face he called me up, “Rush! Get up here!”
And, he presented me with a “special” award. A blue nylon baseball cap with yellow letters which spelled out the nickname he had given me, ASTRO. He called me that because I followed his sideline enthusiasms with my own. While he would bark out at players clear enough for them to understand him clear across the field; I would yell out unintelligible sounds. Always yelling, encouraging my teammates to greater heights, I was. Except I never took the mouthpiece out of my mouth so to KR’s ears I sounded like the cartoon dog, Astro.
Two weeks ago when I texted KR upon his retirement after nearly 50 years of playing and coaching Clarkston football, he replied, “They have all been great years. Great kids. Great relationship and great memories like naming you Astro. Still makes me smile.”
Well, KR, I am glad I was able to make you smile. You were one of the good guys who helped shape a lot of young boys like me into being better young men. Enjoy your retirement and thank you.
* * *
This Saturday, I received the following from my classmate and former Clarkston Mayor Steve Percival in regards to KR.
“I never played football for KR, however our history goes way back. Started at the Summer School program at South Sashabaw Elementary. KR, Yogi (KR’s brother), and my childhood crush Peggy were staff and I remember the games like Indian Wrestling, Four Square, and not sure but I think it was Chicken Fighting (hoisted the little ones on their shoulders). We had to be 6 or 7 or 8 years old.
“Then KR showed up at Sashabaw JR High a few years later as what I think was his student teaching. Gym class with Coach Kozlowski.
“We have had some of the best coaches; Kaul, Krueger, Mrs K, Burgess, Mauti, Wynimko, Mr K, Nuested, Pops, Fife, and more that I can’t remember names. And all the assistant coaching staff. Rounding it out with KR. Not many of us have the direct opportunity to make a difference in the lives of our youth. KR has done that (as well as all of the other coaches). Thanks KR.”
Thanks for reading everybody! Send your comments via email to DontRushDon@gmail.com