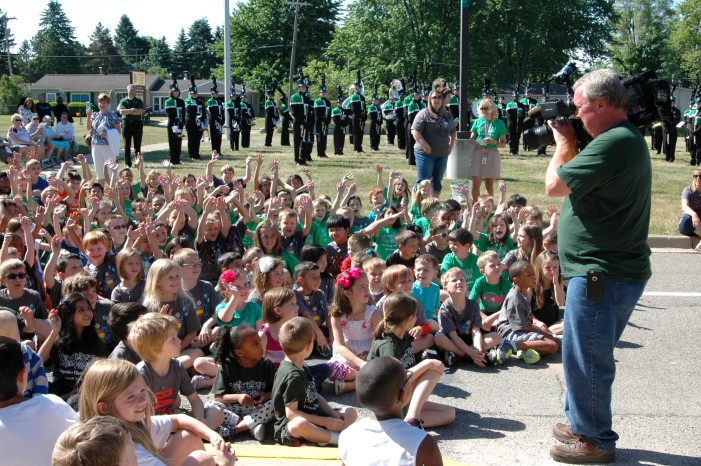 By Meg Peters
Review Co-Editor
Year-round school Carpenter Elementary began with just 300 students.
Now a waiting list caps enrollment at about 460.
“After we opened and could prove the educational benefits, then we started getting the waiting lists,” past principal Rose Edwards, who pioneered the year-round calendar at Carpenter in 1996, said.
The kindergarten waiting list is over 10 students, ranging up to seven or eight students for other grade levels.
But it wasn’t always that way.
“Some people said, ‘it’s not going to last.’ Some people even said, ‘you’re only going to make it for one year.’ But here we are 20 years later,” Edwards said as they keynote speaker at the 20-year anniversary ceremony last Friday.
Music filled the air, provided by the Lake Orion High School Marching Band. The American Flag was raised and keynote speakers praised Carpenter’s system.
Students created a time capsule to be opened by the future Carpenter kids, and released bunches of butterflies into the air they had watched transform over the past several weeks.
Edwards told students they were special, and the reason that Carpenter Elementary had thrived for the past twenty years.
“If Carpenter were to get a report card , you would get an A, maybe even an A+.”
Edwards was with the district for 36 years before retiring in 2008. Beginning at Blanche Sims as a teacher, she moved to Webber as the principal, and finally being asked to begin the balanced calendar at Carpenter as its principal in 1996.
Carpenter first opened in the 1950s, and in 1993 the brainstorming began to convert the traditional calendar into a balanced, year-round schedule.
“The old original calendar was based on an agrarian society when kids had to go help out on the farms. We don’t have that around here anymore, it’s not that way, and for some families this calendar was a wonderful benefit,” Edwards said.
Parents were nervous 20 years ago for the same reason they are nervous about change today, she continued.
“It wasn’t what they had when they were in elementary school,” Edwards said.
The balanced calendar includes all the same vacation breaks as the traditional calendar, plus more. Students have three additional week-long breaks, or intercessions, throughout the year, and in turn have a shorter, six-week summer break.
Intercession is an optional week off in the fall, winter, and spring, which students can spend outside of school, or at school for various educational activities.
Carpenter students just finished their final intercession two weeks ago before summer

break begins June 17, themed “All Fun and Games.” They took a field trip to Zap-Zone, created an Olympic opening ceremony in honor of the upcoming summer games, and more cool stuff. School resumes August 3 for Carpenter.
“It’s just like the breaks throughout the year, that six weeks (summer break) is a perfect amount of time, because they’re refreshed, and not bored,” current Principal Adam Weldon said.
Not only are students refreshed throughout the year, it can be seen in their grades.
Carpenter ranks in the top one percent of Michigan’s public elementary schools for academic achievement, Superintendent Marion Ginopolis said.
“Balanced calendar schools are blooming all over the country. There are more than 3,700 year-round schools in the country with about three million-plus students,” she said. “But guess what? Carpenter was the pioneer and the forerunner.”
The benefits? According to many teachers, students retain more information over the shorter breaks, are refreshed and excited to learn, and material can be covered quicker because less review is needed.
To many moms in the audience that day, the entire district should utilize the balanced calendar, or at the very least, the idea should expand.
“Absolutely,” Carpenter mother Rebecca Denton said. Denton has a second grader at Carpenter, and a seventh grader who “would give anything to be back on this calendar right now.”
Lori Schulte, who has a second grader and a fifth grader at Carpenter, agreed.
“When they come back they are ready to learn,” she said.” They’re not in a slump. The year is not dragging out for them because the breaks are planned just when the kids need that break to recharge.”