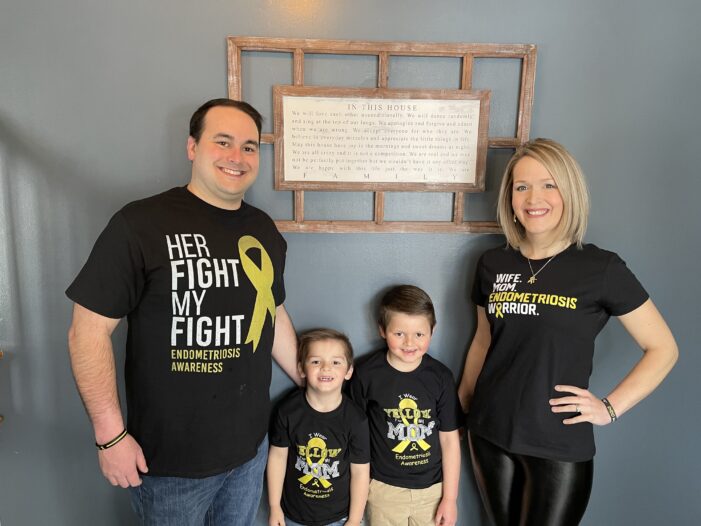 In a lot of ways, Lauren Sloan is your typical wife and mother. And on the surface, she is; but underneath she is in a near-constant battle.

Sloan, who is 34-years-old, has been battling endometriosis, a disorder that causes tissue that is similar to that of the tissue that normally lines the inside of a woman’s uterus to grow outside of the uterus, since she was just 11-years-old.

“It’s not cancer but it spreads like cancer,” Sloan said.

This often very painful disorder impacts 1 in 10 women worldwide and is most commonly found on ovaries, fallopian tubes and the tissue lining the pelvis and, in extreme cases, can spread beyond the pelvic organs.

For Sloan, who has stage-four endometriosis, the disease is debilitating.

“It has destroyed my body to the point where I have nerve damage now because it’s infiltrated into my nerves and I have neuropathy. It causes random muscle spasms all over my body. My legs give out sometimes, like I just drop to the floor sometimes because of it,” she said.

In many situations, an endometriosis diagnosis doesn’t just mean an increased probability of a lifetime of physical pain and discomfort; it also means dealing with the taxing emotional pain that comes with it.

“I have a list of all the things that endometriosis has taken or stolen from me, just choices, just the matter of having the choice. It makes a lot of choices for you,” Sloan said. “You want to commit to plans, you want to do this and that, but when you’re doubled over in the fetal position on the bathroom floor and you can’t stop throwing up because you’re in so much pain, you’re like ‘maybe I shouldn’t go to the baby shower today’ but then you’re letting people down. And all of that stress and anxiety from constantly letting people down, constantly being the burden that you feel like you are on your family because everyone is constantly worried about you.”

Since receiving her diagnosis at 21, Sloan has undergone two rounds of medical menopause, one miscarrige, two high-risk pregnancies and has had 14 surgeries, including a hysterectomy that was performed in 2018 when she was just 31-years-old.

Having spent a majority of her life combating this disease has given Sloan extensive knowledge on the topic — ranging from which physical treatments are best, to the emotional toll of a diagnosis — most of which she has had to actively seek out herself.

“There’s not enough education from doctors,” Sloan said. “When you have a kid, you go in for your first appointment and they give you this folder, right? And it’s supposed to help you get through the next nine months and help you plan your birth plan and birthing classes and all of these things, (like) information about postpartum. I feel like someone’s diagnosed with Endo, why don’t you get a folder that says, ‘Here are some support groups on Facebook you can join’, ‘Here’s Nancy’s Nook’?”

Nancy’s Nook, an online library that is sort of a one-stop-shop for information on endometriosis, is one of the many resources Sloan has used in her fight.

While one would generally believe that the best source of information regarding any health issues would be a certified doctor, that unfortunately is not the case for many people who suffer from endometriosis.

“You automatically think that the doctors are there to help you and they know everything but unfortunately with this disease, most doctors are not educated well enough,” Sloan said.

In Sloan’s experience, the treatment received a by doctors and nurses alike, even after a diagnosis, is enough to make you question your own sanity.

“When a doctor tells you, ‘You’re crazy, it’s in your head, there’s nothing wrong with you.’ Even after a diagnosis, that sticks with you. Am I really sick? Are they even going to find anything when they go in there? Even when you know there’s something in there, you know it’s in there, but it’s just been ingrained that you’re full of it,” said Sloan. “For the little 11-year-old who is having her period and is doubled over in pain, if you can’t do normal things and your friends are on their period and they can go play in their soccer game, or they can go to a birthday party, if it’s affecting your life that bad, it’s not a normal period. That’s not a normal period, there’s something wrong. That’s just something mentally, being younger, that you suffer with.”

“Ablation is like a temporary fix, it’s like putting a band-aid on. It’s like if you burn off a wart and you don’t get rid of the entire thing it’s going to grow back. With excision, you’re actually cutting the tissue off down to the root which gives you – again, there’s no cure for endometriosis, but this is the only way to get any sort of long-term relief.”

According to Sloan, excision is the “gold standard” for endometriosis treatment. However, just receiving that surgery as opposed to ablation was yet another battle in and of itself.

About a month ago, Sloan underwent surgery not only requesting, but expecting to receive excision only to find out afterward that her doctor had performed mostly ablation.

After that last surgery and after nearly two decades of unbearable pain, nausea and migraines, Sloan decided it was time for her to go out of state for surgery number 15, her sights set on Dr. Tamer Sekin, M.D., an endometriosis and excision specialist and surgeon who operates in New York City.

“The hope is a real true better quality of life. If the disease is excised properly and they actually do excision and they cut it out, I may still have pain, it’s not saying that something couldn’t be missed, but my quality of life will be better. It’s less likely that the disease will come back and spread,” Sloan said. “Doing ablation, it’s basically like leaving the roots in there to continue to spread. Even if they took out 10 percent with excision it would be better than 100 percent with ablation.”

Endometriosis is one of the top 20 most painful diseases someone can have but those suffering from it still cannot receive any sort of benefits, Sloan said.

At the end of February, Michigan’s only endometriosis excision specialist retired. In order for someone in Michigan to receive the “gold standard” in endometriosis treatment, they now have no choice but to go out of state.

One thing Sloan wants to convey to those suffering from endometriosis is hope — hope for a better future and hope that endometriosis won’t keep you from achieving your goals even when you’re told it’s impossible.

“Women deserve better, we all do.”

Sloan encourages those who are in need of support to contact her through any of the following avenues:

‘You’re not alone’: Lake Orion resident shares her battle with endometriosis added by mmkelley on March 10, 2021
View all posts by mmkelley →