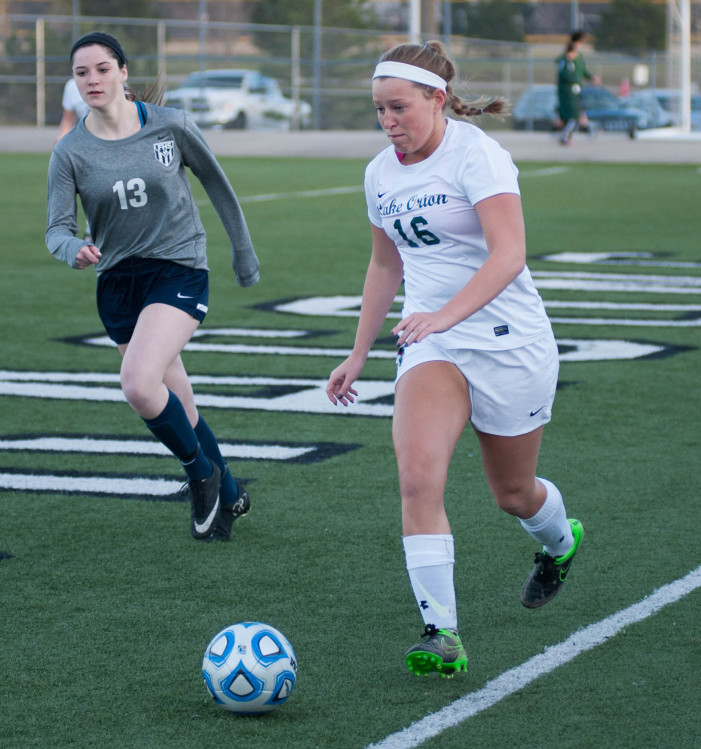 By Chris Hagan
Review Staff Writer
Lake Orion’s girls’ varsity soccer team has started their run in the OAA White division with a new cast of players following the graduation of 12 seniors from last year’s team.
Head Coach Randy McCoy said goodbye to the talented dozen last year, eight of which played for McCoy throughout their high school careers.
The departure of LO powerhouses Hannah Cady and Madz Ham, both of whom are playing collegiately, created a talent gap that McCoy said he’s still trying to fill.
“Between the two of them you take 18 goals off the table. Madz was our anchor in the mid field so obviously replacing a girl who played on Grand Valley’s national championship team as a freshmen is a void to fill,” he said. “The biggest jump for a player is that jump from JV to Varsity and being a superstar in JV doesn’t automatically ensure success at the varsity level because the speed is so much faster.”
The girls have started their 2016-17 season having played just two games bringing their record to 1-1.
With dismal weather conditions including rain and wind, they fell to Berkley 1-0 in their season opener. The team turned around and won the next week against Farmington 2-1.
In net against Berkley was fourth year varsity senior goalie Lauryn Auspitz and against Farmington was junior Taryn Redd.
According to McCoy, despite each girl giving up a goal, they played well. The backline defense has been anchored by Auspitz and Redd who have showed solid performances.
Shining in both games was junior Paige Goodman and sophomore Megan Danielson. The two contributed to Lake Orion’s two goals against the Falcons with senior Captain Katelyn Rusz further anchoring the backline along with first year varsity player Jackie Gingell.
McCoy, whose entering his fifth season as head coach, said several athletes will play a key role throughout the season.
Goodman is an experienced forward and will fill in after Cady’s departure.
Danielson, who joined the team her freshman year, has stepped up in the midfield but is learning her position all over again now that Madz is gone.
“This is very much a transition year when you take a bunch of girls who have been with me for that number of years and now having a different group who bring a different skill-set and possibly a different style,” McCoy said.
Their next game is Thursday against Clarkston at Clarkston High School where they’re hoping to lock in a win and avoid a tie.
“That was the biggest difference with us last year. It wasn’t in our number of losses it was the fact that it was three points for a win and one for a tie,” McCoy said. “We ended up in third place on a points basis and not on a win and loss basis.”
Lake Orion will host their first tournament on Saturday where McCoy is anxious to begin getting a read on this year’s OAA division teams.
“The league is always so equally balanced, since we play each other twice we all know each other so well,” he said. “Our goal really needs to be, if we want to win the league, we need take some of the game where we’ve been tying and turn them into wins.”