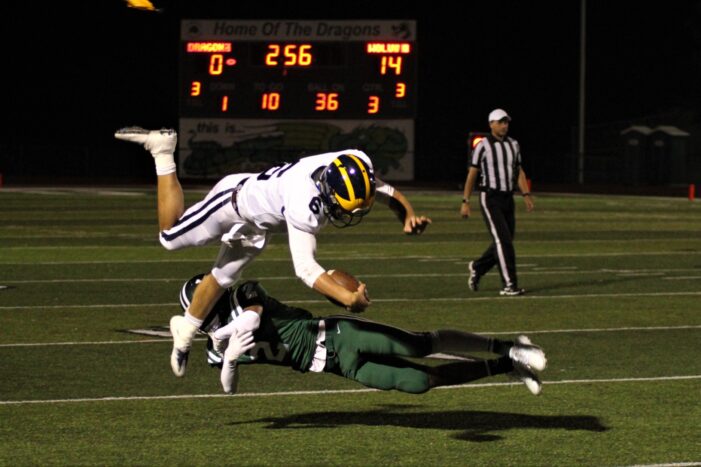 This week concludes The Lake Orion Review’s look back at 2020, a year like no other in recent memory. In this issue, we highlight some of the news and business stories, sports and school highlights and events that helped shape the Orion Township and Village of Lake Orion communities from October through December of 2020.

For the first two parts of the Year in Review 2020, visit lakeorionreview.com or see the Dec. 30 and Jan. 6 print editions.

Library board running as write-in candidates: In the Nov. 3 general election, all six incumbents on the Orion Township Library Board of Trustees are seeking re-election but due to a misunderstanding in the filing deadline MaryAnne Thorndycraft, Mary Pergeau, James Abramczyk, James Phillips, Bert Quinn and Michael Luna must run as write-in candidates.

Lake Orion stops U of D Jesuit in defensive football battle: It was the first game ever between the two teams and the Dragons overcame three turnovers with an impressive defensive performance to top the Cubs on the road, 7-6.

Polls open on Election Day, safety precautions in place: Orion Twp. Clerk Penny Shults expects high absentee voter requests, but knows that many people will still head to the polls on election day. Voters will also face new safety precautions at the polls due to the COVID-19 pandemic, and will be expected to follow some increased safety procedures.

Orion Twp. man was part of the group plotting to kidnap Gov. Whitmer: Thirteen people who conspired to kidnap Michigan Governor Gretchen Whitmer are in jail after a months-long undercover investigation by the Federal Bureau of Investigation put a stop to the plan.

And an Orion Twp. man was allegedly part of the plot to kidnap the governor, according to an FBI affidavit filed in federal court. Daniel Joseph Harris, 23, was reportedly one of the conspirators arrested in an FBI operation.

Members of the group had talked about storming the state Capitol building and taking hostages; kidnapping Whitmer at her official or personal vacation residences; and taking her to remote location in Wisconsin to “stand trial” for treason, according to the FBI complaint.

Downtown Lake Orion becomes home to DIA mural: Detroit Institute of Art artists are painting a mural on the side of the building at 120 S. Broadway St.

Clarkston Wolves hand the Dragons their first football loss of the season: The Wolves posted a lopsided 31-7 victory.

The district has been informed by the Oakland County Health Division that during the 2020-2021 school year, there have been five school-related COVID-19 positive cases in the district.

What’s in the proposed Lake Orion marijuana ordinance?: In the Nov. 3 general election, Village of Lake Orion residents will decide on a proposed ordinance that would allow for the creation and governance of medical and adult recreational marijuana facilities in Lake Orion.

“I am officially retired,” Carl Slomczenski told The Review. “It feels good. It feels really good.”

The new restaurant will be named Johnny Black’s Lake House.

LOCS presents beginning of the year data at Oct. 28 meeting: The data was collected among Kindergarten through eighth-grade students district-wide using nationally-normed benchmark assessments for reading and math.

Seven Dragon runners head to state cross country finals on Friday: The Lake Orion boys varsity cross country team took third place at the MHSAA Region 7-1 meet at Clintonwood Park in Clarkston on Friday and move on to the Division 1 state finals this Friday at the Michigan International Speedway.

Bobcats Slay Dragons in First Round of Football Playoffs: Lake Orion’s fast start fizzled out and the Dragons lost in the first round of the state football playoffs last Friday to the Grand Blanc Bobcats, 28-14.

Supervisor Chris Barnett, Clerk Penny Shults and Treasurer Donni Steele ran unopposed and round out the seven-member board.

Lake Orion voters elect the old and the new to the village council: Councilmember Jerry Narsh was the highest voter-getter and will serve a four-year term, along with newcomers Sarah Luchsinger and Michael J. Lamb.

Council President Ken Van Portfliet was fourth in the vote totals and will serve a two-year term.

LOCS proceeds with in-person learning plan as COVID-19 cases increase: Lake Orion schools reported seven cases of COVID-19 from Nov. 2-8. Elementary students went back to school on Oct. 26 and middle and high school students were to start on Nov. 9.

Police investigate death of Orion Twp. woman, 79: The woman’s death, which appears to be from natural causes, was not reported for more than three weeks.

LOCS provides enrollment updates at Nov. 19 mtg.: While the district projected a decline, they did not estimate as steep of a decline as they ultimately had. LOCS enrollment on Oct. 19 of this year was just 6,696 students — 405 students less than the district had in the spring of last year, or 317 fewer total students than they had expected.

Orion Lighted Parade, ‘Christmas in Toyland’, is canceled for 2020

Peter Kalohn, Lake Orion restauranteur and businessman, passes away at 94: Kalohn, owner of Pete’s Roadhaus, died Saturday, Nov. 21 at the age of 94.

LOCS announces students will stay with remote learning until Jan. 19: Lake Orion Community Schools announced last Tuesday that remote learning will continue until at least Jan. 19, 2021 for students who had been going to class in-person.

Supt. Ben Kirby made the announcement on the district’s website, social media and in an email to parents citing data, academics, staffing and the upcoming holiday break as reasons for the decision.

“Given the continuing rise in COVID-19 case counts in Oakland County, and especially within Orion and our school district boundaries, this is not the appropriate time to bring students and staff members back into the school buildings,” Kirby said.

Carrie Lee’s Chinese & Thai Cuisine restaurant in Orion Twp. paid $37,177 in overtime back wages to six employees after a U.S. Dept. of Labor investigation found that Carrie Lee’s violated the Fair Labor Standards Act (FLSA) by paying kitchen employees flat monthly salaries – partially on payroll and partially in cash – regardless of the number of hours that they worked.

Orion Twp. man is in custody after leaving a young mother in critical condition: A 31-year-old Orion Twp. man severely beat the mother of his child and then fled with their three-month-old baby, the Oakland County Sheriff’s Office reported on Monday.

The 30-year-old woman was taken to local hospital in critical condition.

The Oakland County Prosecutor’s Office authorized a criminal complaint against the man on the charge of Assault with Intent to do Great Bodily Harm Less than Murder, a felony punishable by 10 years imprisonment.

DDA board approves AED purchase and snow removal bid: The Lake Orion Downtown Development Authority board approved the purchase of an AED and awarded a bid for sidewalk snow removal. The AED (Automated External Defibrillator) is for the public restroom inside of Fire Station 1 on Anderson Street across from Children’s Park.

Orion Twp. residents, prepare for 12 weeks of ‘Snowcation’ fun: Orion Twp. is planning different family-friendly activities each week to help get people active and engaged in activities while staying at home.

OAPG modifies a holiday tradition with a parade around the village, twp.: The Orion Lighted Parade was on and off, and on again and off again with a couple different format variations to try to encourage safety and social distancing during the pandemic.

But the Orion Area Parade Group wanted to find some way to continue the tradition, so it was back on — modified — as a daytime parade.

With the COVID-19 pandemic, however, there was no chance of having that many people shop in-store, so the police association altered its plans and will deliver gifts.

Lake Orion Police Officer Ray Hammond organized Shop with a Hero and said the police association will help bring smiles to the faces of 34 kids this year.

The suspects also damaged picnic table tops, along with spindles on the gazebo ramp. The acting public works director spotted the damage and reported it to Lake Orion police around 7 a.m. Dec. 17.

Orion Twp. man charged after leaving a young mother in critical condition: An Orion Twp. man who severely beat the mother of his child and then fled with their three-month-old baby, was identified as 31- year-old Christian Depaul Roberson.

He was arraigned on Dec. 15 in front of Magistrate Marie Soma of the 52nd-3rd District Court in Rochester Hills. Roberson has been charged with one count of Assault with Intent to Do Great Bodily Harm Less Than Murder or by Strangulation, a 10-year felony.

The woman was taken to local hospital in critical condition.