Wolves hand the Dragons their first football loss of the season 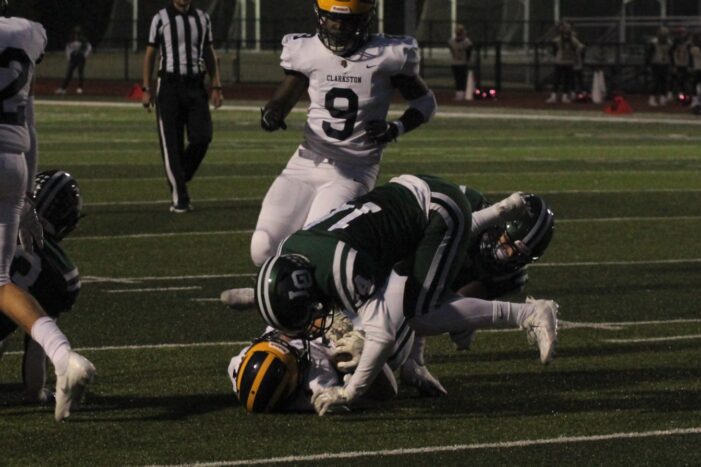 Lake Orion’s football team knew it would have to play a mistake-free game to beat rival Clarkston last Friday, but Dragon turnovers and other miscues helped the Wolves post a lopsided 31-7 victory.

After Lake Orion’s defense forced a punt to open the game, the Dragons drove deep inside Clarkston territory, only to come away empty handed when they failed to convert on fourth down at the Wolves’ 20-yard line.

Down 14-0 to start the second half, Lake Orion’s offense again marched downfield on its first possession. But any chance of a momentum change ended when the Dragons fumbled and turned the ball over at the Clarkston five-yard line.

“That really hurt,” said head coach John Blackstock. “It was really too bad, because it was a great run by our quarterback and his extra effort to gain a couple more yards cost us.”

Later in the third quarter, Clarkston blocked a Lake Orion punt deep in Dragon territory. The Wolves then forced another Dragon turnover on an interception just before the end of the quarter.

Clarkston’s dominant quarter led to two more touchdowns, putting the game out of reach early in the fourth quarter. The Wolves’ final points came on a 31-yard field goal.

Lake Orion’s only score came on a 13-yard touchdown pass from senior Dom Bruno to junior C.J. Witt with 12 seconds left in the game.

“I was really proud of our kids for not quitting against a really good team,” Blackstock said. “But we knew going into the game that we had to play fundamentally sound football in all phases of the game. At some points we did, but not the whole time.”

Lake Orion’s offense generated 257 total yards, including 210 rushing and 47 through the air.

Blackstock also pointed out the strong play of junior defensive lineman Joey Thede, who faced off against two Clarkston linemen who will be playing major D1 college football next year.

“Joey had a big game,” Blackstock said. “When you watch the tape, you can see he more than held his own against their big tackles.”

The loss drops the Dragons record to 2-1 (1-1 OAA Red). This week, Lake Orion hopes to get back on track against Farmington in the team’s final home game.

Blackstock said the Falcons have several good athletes and it will be a challenge to prepare for playing them.

“Offensively, they do a lot of different things,” he said. “Defensively, they will be stacking the box to stop our running game and challenging us to pass. We have to manufacture a passing game this week.”

Getting the passing game going is but one of the priorities the team will be focusing on with two games left in the pandemic shortened regular season.

“We have eight practices left, eight quarters left to prepare our team for the playoff run,” Blackstock said. “With everyone making the postseason this year, it’s going to be interesting.”

Wolves hand the Dragons their first football loss of the season added by mmkelley on October 14, 2020
View all posts by mmkelley →