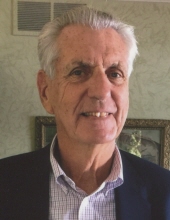 William John Schramm of Lake Orion passed away December 9, 2021. He was 80-years-old.

Bill was an active member at Christ the Redeemer where he served as a Lecture, Eucharistic Minister and sang in the Choir. He was an avid golfer and was a member of Birmingham Athletic Club where he played tennis and squash.

Bill received the Citizen of the Month Award for volunteerism and commitment to the Orion Community from his years serving on the Township Board of Trustees, Orion Senior Advisory Council and Homes for Autism.

His involvement in Homes for Autism has been a 25-year passion and he has served them as president for several years. He helped build houses for Homes for Autism through a partnership with Habitat for Humanity and Christ the Redeemer where he served as a painter, cleanup crew and numerous odd jobs.

He also loved to travel, and he and Judy have many great memories of their trips. His favorite activity was pontoon boat captain and he spent many hours ferrying people around the lake for an enjoyable ride or a swim off the boat. He was usually the first one to swim in the lake and the last to take a polar plunge. The perfect ending to his day was a fire in the backyard and telling his grandkids stories he would make up.

He was an amazing man who always had a hand to lend, a word of encouragement and a commitment to charitable giving and paying it forward.

The family will receive friends from 10:30 a.m. until the time of service.

Inurnment at Square Lake Cemetery in Orion will be at a later date.