The proposed Planned Unit Development (PUD) Preliminary Plan is to redevelop the site into a mixed-use development, which would have 89 residential units and up to 5,000 square feet in total of commercial and community space.

“The public needs to know that’s (the public hearings) the opportunity for them to come and share concerns, share their positivity, negativity, whatever it may be. But bring it and let’s talk about it because this is a pinnacle development in our community,” said village council President Ken Van Portfliet. 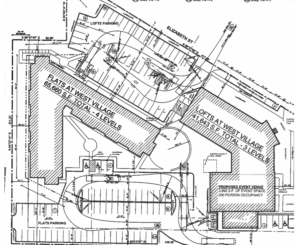 Kyle Westberg with West Construction has proposed the redevelopment.

The proposed redevelopment includes the Lofts at West Village – the Ehman Center building – which would have three levels, 30 loft-style apartments and would be 41,643 square feet. There would be an event space of 3,992 square feet at the south end of the building with a capacity for 200 people, according to plans submitted to the village.

The Flats at West Village, the second proposed building, which would be a new building, would be four levels with a total 65,660 square feet and have 59 one and two bedroom apartments.

There would be a parking lot on Elizabeth Street, south of the Lofts at West Village (the current building).

The first formal step in the PUD process is for the Planning Commission to review the application and concept plan at a regularly scheduled meeting to determine eligibility. After consideration, the Planning Commission shall make a recommendation to the Village Council on whether the proposed development satisfies the eligibility criteria in Section 11.02 of the Zoning Ordinance.

The planning commission previously had a Preliminary PUD Review – PUD Eligibility review and discussion during its Sept. 7 meeting and recommended that the village council grant eligibility approval.

The village council then accepted the planning commission’s recommendation at the council’s Sept. 13 meeting.

“This is the second of really five steps needed to finally adopt the PUD ordinance,” said village Manager Joe Young at the Sept. 13 meeting, adding that “once eligibility is approved, they have to go back and do the final preliminary site plan, which has to go back to the planning commission.”

The planning commission could then recommend approval to the council and the council would then have a public hearing and first reading of the PUD ordinance and a “second reading and adoption of a final PUD ordinance,” Young said.

“We’re historical preseveration people. We’ve been doing this for about 15 years now,” Westberg said, adding that the school has been underused for years and is now becoming blighted and has graffiti on the building. “So, we’re looking at it as the benefit to the community is to clean up an old building and get rid of the blight, but also preserve an historic structure.”

The former high school building was established in 1927 according to village documents.

Westberg said they would also do some “public space improvements.” The public lot on the corner of Elizabeth and Lapeer streets, across from the Ehman Center, will be repaved and rebuilt with curbs and landscaping.

“Beautify that parking lot as part of our expenses, not the village’s,” Westberg said.

There also are improvements planned for the sidewalks and curbs around the area.

The cost of the project would be around $19.8 million according to documents in the village council meeting packet.

Planning commission agenda documents are available at lakeorion.org under the “Boards” tab.

Village planning commission to hold public hearing on the redevelopment of the former Lake Orion High School/Ehman Center building added by mmkelley on September 29, 2021
View all posts by mmkelley →