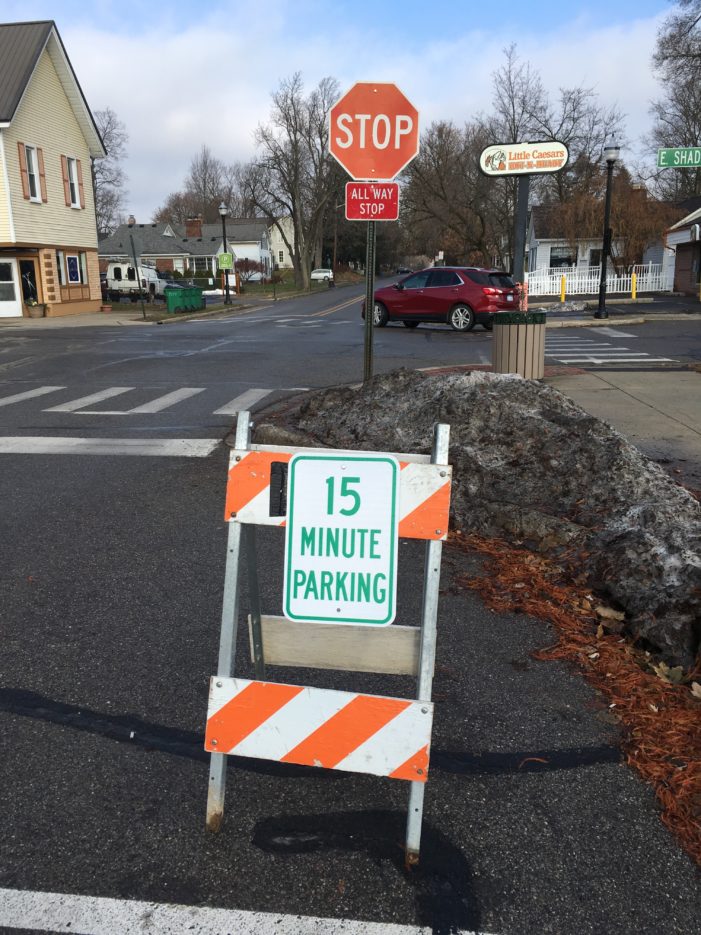 Village officials are testing whether 15-minute parking spots in the downtown district will work. The pilot program will run through the end of the year and be evaluated then, Manager Joe Young said.

The spots are designed for customers who need just a few minutes to run into a store to pick up an item, pick up a meal at one of the local restaurants or get to dropped off/picked up by Uber or Lyft a short-term spot.

“We have a trial period of 15-minute parking spots in our community right now that started last week,” council President Ken Van Portfliet said. “Just a little message to the public: they’re meant for the quick food pickup, quick drop-off of documents to the lawyer’s office, that type of business.

“We’ve already experienced some problems with people removing signs and parking there and having dinner. We’re looking at this as being real helpful parking solution to assist our businesses and the general public as well. So, they’re out there, please use them appropriately,” Van Portfliet said.

The spots would also allow business owners to load and unload merchandise quickly without using a spot that could have gone to visitors or customers, committee members said.

Young said the village has designated four spots around the downtown as 15-minute parking spots. The parking spots are strategically placed around different sections of Lake Orion to provide access to the businesses in those quadrants.

Young said the spots will be marked, in the short-term, with A-frame signs, which should appear in the next week or so.

If the program works, the village could consider parking meters in those spots to keep track of the allotted time. Whether or not meters would be paid or free is undecided.

Village officials hope the short-term parking spots will help open up more spots on the streets for anyone staying longer than 15 minutes. Currently, parking on village streets in the downtown district is limited to two hours.

But be warned: anyone who parks in a 15-minute spot and stays longer is subject to ticketing, Young said.

There are six-hour lots in the downtown district: the municipal lot off Shadbolt (next to Lockhart’s BBQ); the municipal lot on the corner of Anderson and Front streets (the “Whiskey’s” lot across the street from 20 Front Street).

There are several private lots that have shared parking agreements with the Downtown Development Authority, such as The Lake Orion Review; however, those lots also have restrictions during business hours for employees and customers only. Check the signs in each lot for public hours of use.

The former Pet Centre lot at Anderson and Flint streets, Caruso Chiropractic on Lapeer Street and The Event Place on Broadway Street also have shared-use agreements with the DDA.