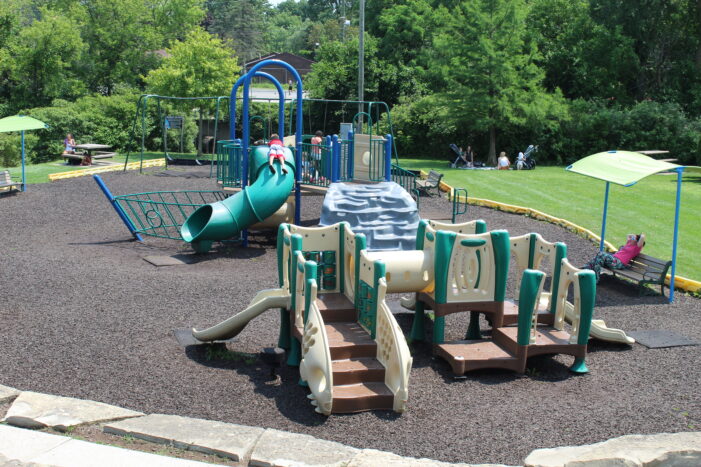 The Village of Lake Orion’s Parks and Recreation Advisory Committee has their eye on some new park upgrades at both Children’s and Green’s parks. The ideas were presented to both the village council and the Downtown Development Authority Board of Directors on July 12 and July 13, respectively.

Giving the presentation at the DDA meeting was chairperson of the Parks and Rec. Advisory Committee Rosemary Ford, along with Cristy Garbacik and committee secretary and village Councilmember Teresa Rutt.

The committee’s role is to advise the village council on maintaining and initiating capital improvement projects for the six parks within the village, Rutt said.

Though there are six parks in the village, this presentation was only regarding Green’s and Children’s Park, which are both located in the DDA district.

“We thought we would come to you and showcase this as well because now that you’ve got all this influx of people, you’re going to want good equipment there,” Ford said at the DDA meeting.

Every year, the parks and recreation department in the village receives $5,000 in funding, making it difficult to fund capital improvement projects. According to Rutt, Children’s Park’s last major update was done in partnership with the DDA in 2011.

Other than that, there have not been many updates to any of the village’s parks aside from a playscape replacement that was done due to an insurance claim after a car accident and other smaller things with the help of the Lake Orion Sunrise Rotary and American Legion.

“When it comes to big projects like play structure equipment, these are things we haven’t been able to do because we just haven’t had the funds,” Rutt said. “So, we’ve been saving our money here and there as we can. We’ve pulled together, over the course of a number of years, about $30,000.”

The DDA is expected to receive money from the township’s parks and recreation milage but the money has since been earmarked for the Paint Creek Bank Stabilization project.

Children’s Park, located in the heart of downtown Lake Orion, is one of the more highly trafficked parks in the village.

Inside the park there are four-piece of play equipment: a red slide, a toddler structure, a larger structure for school-age children and swings.

While the red slide is still in good condition, there are concerns about the other structures that have begun to crack, bend and rust, said Ford adding that the toddler structure has protruding bolts that are a safety issue.

“Our wonderful DPW have looked at these and have made attempts to repair them and especially with the bolts, it’s not possible,” Ford said.

What the parks and rec department would like to do is replace the old playscapes withs new play structures, one for ages 5-12 and one for children up to age 5. Additionally, they would like to replace the swing set and add standing spinners.

The total estimated cost, should the village and DDA move forward with the project, rounds out to $75,935.

Green’s Park is located off of M-24 on Lake Orion. It is the only village park on the lake and is an access point for residents that are non-lake residents.

Currently, the structures at Green’s Park include a basketball hoop, sand volleyball court, horseshoes, swings and a slide.

The slide structure is the only thing that is for all ages but is difficult for younger children to navigate because of the ladder, Ford said.

Instead of the two structure plan for Children’s Park, the parks and rec advisory committee decided that one big playset with multiple slides and activities would fit best in the space.

Additionally, they would like to add a pavilion, something the village parks and rec advisory committee have been trying to have installed for some time now.

If the village and DDA decide to approve these projects, the total estimated cost is $87,028.

The Parks and Rec Advisory Committee has applied for grants and are waiting to hear back from one currently that could get them an additional $50,000. However, With roughly $30,000 to their name, the parks and rec committee cannot feasibly fund these projects alone.

DDA board member and Township Supervisor Chris Barnett offered some help by providing several names of organizations as well as township staff members who would be worth contacting as far as possible grants and other ways of funding the projects.

While there is no definitive timeline for any of these projects nor has anything been fully committed to, the DDA board expressed their excitement for the possible improvements.