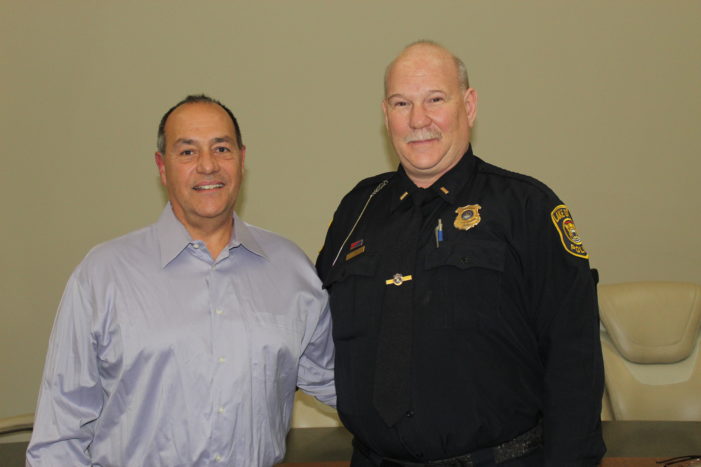 Former Police Chief Jerry Narsh may have retired from his post as chief of the Lake Orion Police Department, but on Monday he gained another position in the village: councilmember.

“I will say that Jerry Narsh comes to us with a lot of experience and knowledge,” said council President Ken Van Portfliet. “Our other candidate was a very good candidate as well. I hope to work with her in the future.”

“I really appreciate her coming in and putting her (application) in. I wish there was two openings…because she was a good person who seemed to want to come in and join our team,” said Councilmember Ray Hammond. “I hope she runs in November, as do others who might be interested in government and council opportunities.”

The council officially accepted Churchill’s resignation on Nov. 12. Under village charter, the council had until Dec. 12 to appoint someone to fill the council seat.

Narsh will fill the remainder of Churchill’s term through Nov. 14, 2020, at which time he would have to run for reelection.

After 38 years with the police department, Narsh announced on Nov. 13 that he would retire from the Lake Orion Police Department in December. His last official day was Dec. 8. He began his career with Lake Orion as a reserve officer. In 1995 he became a lieutenant and in 2001 he was appointed chief of police.

Narsh, who was eligible to retire from Lake Orion five years ago, has accepted the position of police chief with the Village of Holly Police Department.

Rossman’s appointment had been a consent agenda item, but Van Portfliet asked to amend the agenda to make the appointment an action item.

“This is highly respectful of Lt. Rossman and our community at-large,” said Van Portfliet, who called for a vote of the council on the appointment. “Because I’d like Mr. Rossman to know many people are behind him.”

“I’m very humbled. This is exciting. Thank you for having confidence in me,” Rosman said. “This is my home town. I had a great teacher. I served under him for 18 years and I learned a lot from Chief Jerry Narsh. We’re going to continue what his goal was, I promise you that.”

Van Portfliet said he’s heard from residents who have complimented the LOPD on its “quality of service and level of professionalism” adding that he knows it will continue under Rossman.

Hammond said the “number one issue” when he was asking residents to sign his petition for village council was the police department.

“They wanted to maintain our own police department. They saw that as the number one value of living in the village…’we want this police department to stay. If you want to run for council, that’s fine, but don’t you do anything to get rid of our police department,’” Hammond said.

The council said it would proceed with permanently filling the police chief position “in a timely manner to minimize additional staff and overtime costs to cover the police patrol services while Lt. Rossman is acting police chief.”

The council also presented Narsh with a tribute, thanking him for his years of service.

“Thank you, Chief Narsh, for the many wonderful years of service to the Lake Orion community. We wish you the all the success in your new role as Police Chief of the Village of Holly,” the tribute reads, in part.

“I was a kid when I got here and you guys kind of raised me,” Narsh said. “This is my home. This is where my heart is. I love this community. It’s the people in the community, not the buildings, that make me love it.”

Also at the meeting:

On behalf of the Village of Lake Orion we present this recognition of appreciation to Dia Zaraga (Sagebrush), Lake Orion United Methodist Church, Kimberly Dunn, Jim Porritt (Porritt Law), Lake Orion Police Department and many others for their efforts and contributions to helping Mr. Bruce Gertz with secure housing and furnishings providing him an improved quality of life. Your assistance with helping Bruce into a place he can call his home are most appreciated. The Village of Lake Orion extends our gratitude to your time and contributions for coming to the aid of Bruce.

A heartfelt “Thank you” is extended to all those who have made contributions over the past several years for the care and concern for Bruce. May you be blessed as you have helped bless Bruce.