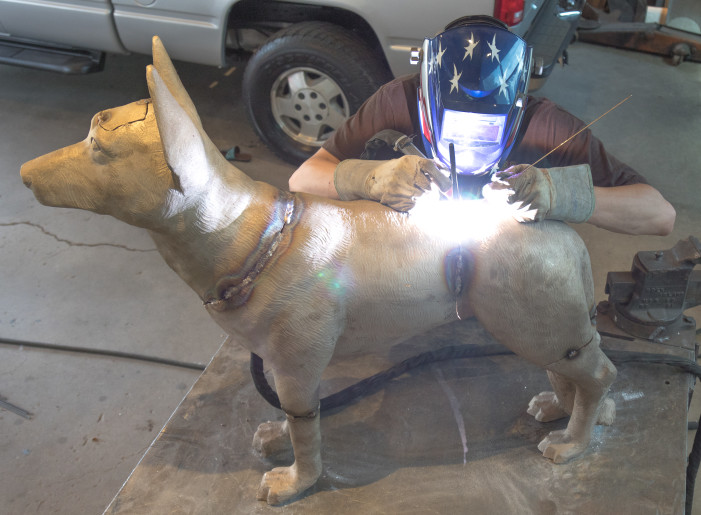 The War Dog Monument portrays two military German Shepherds cast in bronze, atop a base of sand bags memorializing the heroic canines that served alongside soldiers during times of war and peace. German Shepherds are still commonly used in the American military for their agility, strength and courage.

The monument has been four months in the making and will permanently reside at the Orion Veteran’s Memorial after an unveiling and dedication ceremony beginning at 10 a.m. this Saturday.

Father John Cochran, Prior of the St. Augustine’s Monastery, will bless the monument. Speakers will include Dr. Joe Mastromatteo, chairman of the Orion Veterans Memorial Committee, and Phil Weitlauf, president of the War Dog Memorial.

Special recognition will be given to sculptor Frank Varga, welding artist Steven Leach, and Bob Watros, the memorial manager.

The ceremony includes a salute by retired war dogs who will be on location with their owners. Coffee with a Veteran will immediately follow the ceremony and light refreshments will be provided. A ceremony to retire damaged American flags begins at 1 p.m.

The only memorial of its kind, the Orion Veteran’s Memorial was built and is maintained by area veterans and volunteers — not the village — and relies upon monetary, time and material donations.

Both Varga and Leach donated their services and numerous others were involved in making this dream come true. Yet, the monument amounted to more than $20,000 — $5,000 of which was donated by North Oakland VFW Post 334.

“It takes a team,” said Leach, an integral part of the success of Orion Veterans Memorial. Leach, owner of Custom Welding, and his son Jackson, are the welding artists and actively involved in the memorial.

The dog memorial started with an idea by Joe Zikewich.

Every step in the process was touched by the hands of an artist, from the clay to applying the patina. Varga, an internationally renowned sculptor and Vietnam veteran, sculpted the monument from clay.

One of Varga’s international pieces of art, The Immigrants, was dedicated in 1986 at the harbor of Bremerhaven, Germany. It is over 19-feet high and faces towards the United States.

Varga’s work is displayed throughout the world, including a portrait of John F. Kennedy in the White House and a bronze portrait bust of Pope John Paul in the Vatican. He has many works of art in Budapest, Hungary where he was born in 1943, as well as museums and exhibitions, private and public collections, churches and cathedrals.

The War Dog Memorial is Varga’s second piece at the Orion Veterans Memorial.

Varga’s talent seems to be inherited: there have been four generations of Varga sculptors.

“Being a sculptor is my life’s work, it’s in my blood, and both my sons naturally have that same artistic talent,” said Varga.

The process begins when Varga sculpts the memorial out of clay — he does not work from a pattern, but from a mental image.

A mold is made from the sculpture and shipped in pieces from Varga’s studio in Florida. The War Dog Monument shipment held 11 pieces; one dog was divided into 5 pieces and the other into 6.

Ben Cassell at Fine Arts Sculpture Centre in Clarkston received the shipment and was next in line to work on the sculpture.

To create a mold, a release product and rubber compound is applied to each section of the sculpture. The process picks up every microscopic detail from the clay sculpture to obtain an exact replica.

The rubber mold is painted with a thin layer of wax. This process is repeated until the desired thickness is reached.

To obtain an exact replica of the original sculpture, any parting lines in the wax are filled and gates are attached. The gates guide the hot bronze into the mold as it flows down into the main chamber.

A protective ceramic shell is made from the wax replica by dipping it into a ceramic slurry. The form is immediately placed into a sand solution. Once the piece is dried, the procedure is repeated three to four times, or until an estimated 3/4 inch thickness is achieved.

Left with a ceramic shell with a wax interior, it is time to de-wax the mold. The shell is placed into a 300-degree kiln. The heat causes the wax to melt and the ceramic to harden.

The shell is inspected for cracks, patched if necessary, and reheated.

With no signs of cracks, the pieces are fired in the kiln once more, this time at 1,800 degrees, to increase their hardness. The fired pieces are removed and placed in a rack of sand that holds them until they are filled with bronze.

The bronze is heated to 2,100 degrees to obtain a pourable solution.

With the assistance of chains and hooks, the bronze is moved from the kiln and poured into the ceramic shells.

Once cool, the shell is knocked off the brass statue with tools such as hammers.

The sculpture is sandblasted to remove surface impurities and the gates are removed, resulting in an exact bronze replica of the original clay sculpture.

Using chemicals applied with special tools and heated with a torch, the metal-welding craftsmen piece the sculpture together so it looks exactly like the artist’s original clay model.

After the welding process, the sculpture is chased and sanded to restore the original texture.

Patina is applied by spraying and by hand until the desired colors are achieved.

To complete the statue a coating of wax, often mixed with patina is applied that helps keep its shine and luster.

The memorial is dedicated to the military personnel who gave their lives for the freedom of the country.

Donations can be make my mailing a check to the Orion Veteran’s Memorial, 312 S. Broadway, Lake Orion, MI 48362.