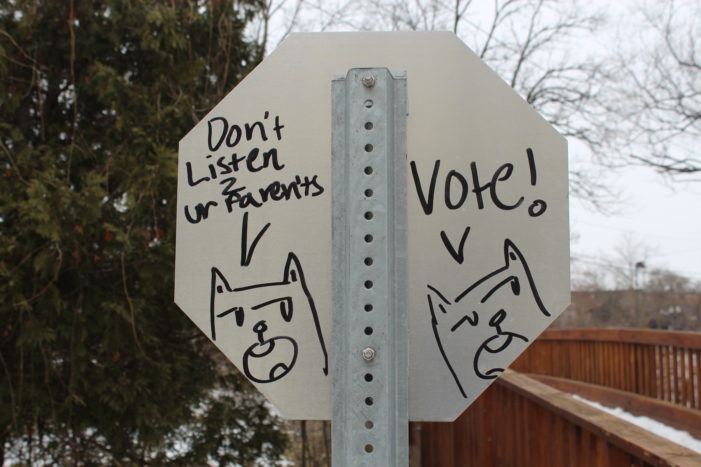 It’s not the kind of walking tour that village officials wanted for Lake Orion, but anyone who strolls through the downtown can see scores of new graffiti on public signs and mailboxes.

Graffiti vandals colored downtown Lake Orion on Feb. 9, spray painting messages, cartoon cats and other letters and symbols on everything from street signs to utility meters, direction maps and mailboxes.

The swath of graffiti cuts a path from the Shadbolt/Broadway streets area, down both those streets, through Meeks Park and along Anderson Street by the Orion Art Center and Children’s Park parking lot and as far as Atwater Street.

“It seems to be concentrated in the downtown area, over to Atwater and Meeks Park,” Rossman said.

He added that there were between 50-73 incidents, or “taggings” of graffiti throughout downtown Lake Orion.

Lake Orion police do have two suspects in the case.

“We do have a suspect who has admitted to it,” Rossman said. “We obtained a video that showed some of the tagging. That’s how we knew there were two suspects.”

One of the suspects is a 21-year-old Lake Orion man, admitted to police that he took part in the vandalism.

Based on the video surveillance from a downtown businesses’ security cameras, police estimate that graffiti incidents occurred around 6 p.m. Feb. 9.

From the video, Lake Orion investigators were able to identify one of the suspects. They then worked quietly to gather evidence to get a judge to issue a search warrant, Rossman said.

On Feb. 16, six days after the suspects’ spray-painting spree, LOPD officers executed the search warrant and recovered items from the Lake Orion man’s home that linked him to the graffiti, Rossman said.

The other suspect is from the “Downriver” area (south of Detroit in Wayne County), Rossman said, adding that he could not release anymore information on the suspects until after they have been arraigned.

Lake Orion police do plan on submitting Malicious Destruction of Property charges to the county prosecutor’s office, which will then make the final determination on the charges, Rossman said.

The suspects had not been charged, as of Monday, because the value of the damages still needed to be determined and that value can affect the degree of the charges, whether the crimes amount to a misdemeanor or felony.

“We have to find out what the total cost of the damage is,” Rossman said.

The Lake Orion Downtown Development Authority purchased many of the directional, parking lot and gateway signs and map kiosks as part of its wayfinding and signage upgrades last summer, while some of the other street signs have been in place for years.

Molly LaLone, executive director of, said the village’s Department of Public Works is evaluating the damage to see if what can be cleaned and what has to be replaced.

“The DPW is still doing a cost-recovery analysis,” LaLone said. “They know the costs of the signs, they know the different materials that each sign is made of and they have solutions for cleaning graffiti. Hopefully, all of those materials can be cleaned, and not have to be replaced.”

LaLone’s been informed that the suspect who admitted to the graffiti could also be paying for the damage.

“It is being handled through the Lake Orion Police Department and our insurance company,” LaLone said. “We understand that someone has accepted responsibility for restitution.”

Vandals trash the Village of Lake Orion added by mmkelley on February 19, 2020
View all posts by mmkelley →