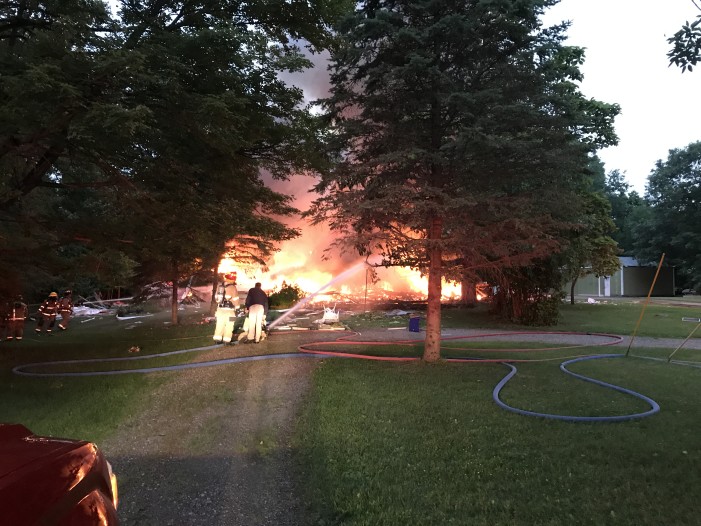 ‘It was an absolute inferno…it was just like a ball of fire.’ — Chris Barnett, Orion Twp. supervisor

Orion Township officials have described the fire at a Coats Road home as “organized chaos” and are now trying to piece together what led to the explosion and fire that killed Bruce and Kathy Dominguez.

“The first five minutes of any fire ground are going to be organized chaos, but it was just a matter of setting up a water supply on our end,” said Lt. Chris Hagan of the Orion Twp. Fire Dept.

“It was deemed a defensive fire when they got here, meaning it just wasn’t safe to put anyone’s life in danger to try to enter because nothing about this house was stable,” said Orion Twp. Supervisor Chris Barnett, who directed traffic to keep the roads clear for emergency vehicles.

Hagan, who arrived fourth on the scene, worked with Captain Eric Florence to organize the water supply and refilling process. “We started putting the fire out and tried to advance as close as we could but it was some pretty intense heat.”

Fire crews were on scene Thursday monitoring the debris, making sure there were no flare ups. A forensic investigative unit also arrived Thursday morning to map the area and reconstruct what happened.

Hagan said the firefighters faced a daunting challenge in extinguishing the house fire.

“The toughest part of anything with a collapse is you have a pancaked and cantilevered collapse of void areas: trapped pockets of fire. And if any part of that is a roof, or porch roof with shingles on it, the shingles are going to do exactly what they’re made to do – block water.

“So it becomes very difficult when they weigh 5-6-7 hundred pounds for us to be able to break them apart and get water underneath. That’s why, in a large part, why we were on scene for such a long time,” Hagan said. “We brought an excavator in to pull that debris off. Exactly like we did at the (Orion) Pet Centre. This time it was a little more delicate.”

The initial call came in a little after 8:30 p.m. Wednesday night from the neighbors. But dispatch received several calls from people, as far as near the village, who heard some sort of explosion, Barnett said.

“I got here at 8:50 p.m. and it was a fireball. There was nothing they could do,” Barnett said. “They did everything they could but they were unable to same them. There were flames over the trees on the property, with the fire reaching 40-50 feet high.”

Barnett said Kym Dominguez, 29, received only a few scratches, but was later to taken to the hospital to be checked out. “The daughter ended up going to Crittenden, but she was at a neighbor’s most of the night.”

The Dominguez’s have two other daughters who are in the military – one stationed in Japan and the other in South Carolina – that flew in once they were notified.

“They recovered both bodies last night. It’s a horrific tragedy. Obviously, they’re out here right now trying to understand what happened,” Barnett said. “The only thing that we’ve heard so far is that he (Bruce Dominguez) might have been working on the house, doing some projects. They’re interviewing the daughter, trying to find out what happened.”

Several accounts have Bruce Dominguez calling friends for help, saying he was trapped inside the home. He did not make a call to 911, Barnett said.

Hagan said hearing people are trapped inside a fire is heart-rending for firefighters as they race to the scene.

“It’s heartbreaking. It’s an incredibly somber moment. And when you respond to something like this and you hear that there are possibly people trapped, or people confirmed trapped, and you’re in the fire truck going (to the fire), your heart drops.

Barnett said about 70 first responders were on scene from the time of the call until early Thursday morning.

“I’ve never seen anything remotely like this in my life. It was just crazy. It was chaos, it was organized chaos from the fire scene. Everything was very organized. It’s just terrible knowing that there’s nothing you can really do,” Barnett said.

“It was a heroic effort by all who were out here. We probably had at least 50 fire personnel and probably 20 sheriff’s personnel working last night.”