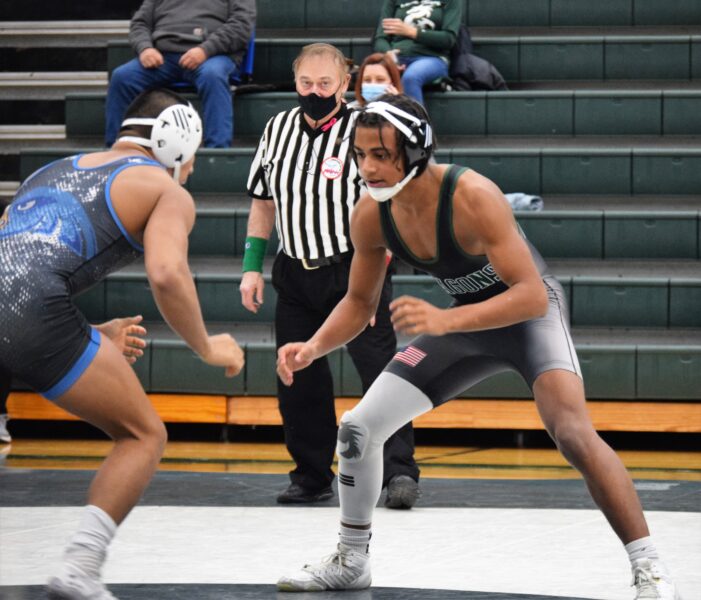 Although it was not a certainty, it was probably inevitable. Covid-19 finally invaded high school wrestling, leaving many wrestlers and entire teams unable to continue.

With Covid protocols, quarantining and contact tracing, the team limped into team districts on March 17. The Dragons lost in the opening match to Oxford, with many wrestlers holding out to try and stay healthy to compete in Individual districts on Saturday.

Fortunately, not all wrestlers were affected and Lake Orion had three wrestlers advance to Individual regionals next weekend.

Sophomore Judah Kinne (215) came away with a team best second place. He got a quick first period pin win in his first match and then a close 5-4 decision in his second match.

But Kinne could not get the win in the championship match against Stoney Creek, thereby placing second but securing his place Saturday at regionals.

The other two Lake Orion regional qualifiers took a longer path to advance.

Sophomores Edwin Morris (285) and Dorian Hill (135) both won their first matches by pin and decision respectively.

Their next round matches were both lost by decision, pushing them into the “blood round” – a round that determines whether the wrestler advances or goes home.

Morris came away with a close 1-0 decision over Rochester. Hill also beat his Utica opponent by decision, 6-4. Both secured a spot at regionals.

In the placement round, Morris again faced a Rochester wrestler, but this time was not able to earn a victory coming away with a fourth-place finish. Hill was more successful, comfortably beating his Oxford opponent 5-1, taking third place.

Next Saturday could be a great chance for the Dragon wrestlers to advance to the state tournament as 39 ranked wrestlers in division 1 alone did not enter Individual districts.

Three Dragon wrestlers advance to regionals added by mmkelley on March 24, 2021
View all posts by mmkelley →