‘Thoughts and prayers are not enough…’ 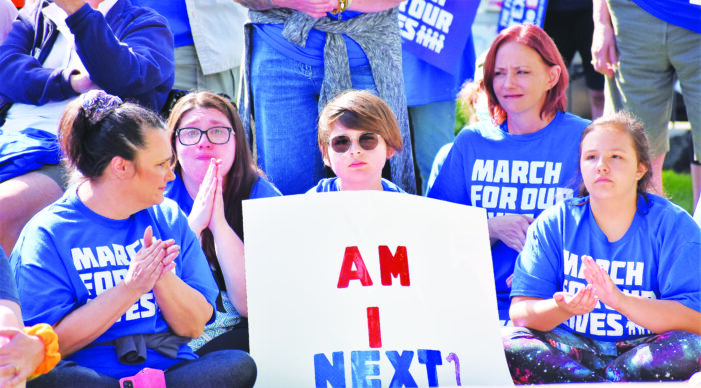 By Jim Newell
Review Editor
OXFORD — Oxford High School students know firsthand the horror and devastation of a school shooting and on Saturday they rallied to demand lawmakers make meaningful changes so more people do not die needlessly from gun violence.
About 600 supporters – students, parents, family, friends, community members – gathered in Centennial Park in downtown Oxford to demand gun reform laws in the wake of more mass shootings at Robb Elementary in Uvalde, Texas on May 24 and at a supermarket in Buffalo, New York on May 14.
No Future Without Today, a nonprofit student-led initiative organized by survivors from Oxford High School, organized the event and partnered with the national March For Our Lives group.
“All organizers are Oxford High School students or Oxford High School graduates. Almost all of us were there Nov. 30 during the shooting. So, this isn’t just something we see on the news, it’s something that we’ve lived,” said Aubrey Greenfield, an incoming senior at Oxford High School and media coordinator for No Future Without Today.
And while the speakers on Saturday said they appreciated the “thoughts and prayers” they have received since the Oxford shooting, it’s not enough.
Reina St. Juliana, co-vice president of No Future Without Today, spoke at the protest saying it is time for action, not more of the same talk.
“Standing still, not changing; that’s a death sentence,” said St. Juliana. “My little sister, Hana, was one of the four (students) killed on Nov. 30 at Oxford High School. People are killers as much as guns are enablers for those killings. My sister died because of the bullets in her body.
“I am calling on all of you to take action and demand that your political representatives, regardless of party affiliation, immediately take significant and meaningful action to make changes necessary to protect us all. Use your power. Use your vote. Vote to make change by refusing to support any politician that continues to block forward movement on gun violence (prevention). Protect our kids, not our guns,” St. Juliana said.
Protestors called for lawmakers to enact universal background checks, safe storage laws, Social Emotional Learning at schools and Red Flag Laws. Some called for raising the minimum age to purchase a gun from 18 to 21 years old.
The protest and march were almost seven months after the shooting that killed four Oxford High School students – Hana St. Juliana, Justin Schilling, Tate Myre and Madisyn Baldwin – and injured seven other people.
“While many of the legislators refuse to enact sensible gun laws, children continue to die and we are expected to recover and move on until the next mass shooting forces us to relive our pain,” said Dylan Morris, an Oxford student and executive director of No Future Without Today. “It should not be our job to march for sensible change that has not occurred seven months after our school shooting.”
Madeline “Maddie” Johnson, a 2022 Oxford graduate, is vice-president of No Future Without Today.
“I want to use my voice and encourage others to use their voices so that we get the attention of the government and of people all around the country, so that everyone starts to realize that this is an issue that needs immediate solving,” she said.
“We’ve been getting amazing support. There are parents here, police officers, people from neighboring communities. Overall, we have gotten some backlash but I’d say the majority has been nothing but love and support for us,” Johnson said.
Johnson wants to see the creation of safe storage laws, universal background checks, “social media red flag laws, as well as mental health reform in schools to de-stigmatize that” and government buying back firearms “to get as many guns out the way as possible.”
“I’m hoping that, even though (owning guns) is a constitutional right, when children’s lives are put in the way, we should be put first, always,” Johnson said. “I’m here today for Madisyn Baldwin. She was my best friend. She was killed the day of the 30th. It’s something that has changed my life forever and since she can’t use her voice anymore, I’m here fighting for her today.”
“Something that our group is very passionate about is safe storage laws. Especially since those were tied so closely to the Oxford High School shooting. Michigan does not have a safe storage law. We would love a safe storage law that requires that guns be locked away in households with minors, with some locking device or mechanism,” said Greenfield.
“We want to make sure that no one has to go through those awful feelings after a school shooting ever again. We feel like, through this event, we’ll get the message across that we’re tired of sitting idly while politicians and congressmen and others make decisions for us. We want to make decisions for ourselves, and we want to let them know what we want and that we want it right now, we can’t wait any longer,” Greenfield said.
For more information on No Future Without Today, visit facebook.com/nofuturewithouttoday and nofuturewithouttoday.org.