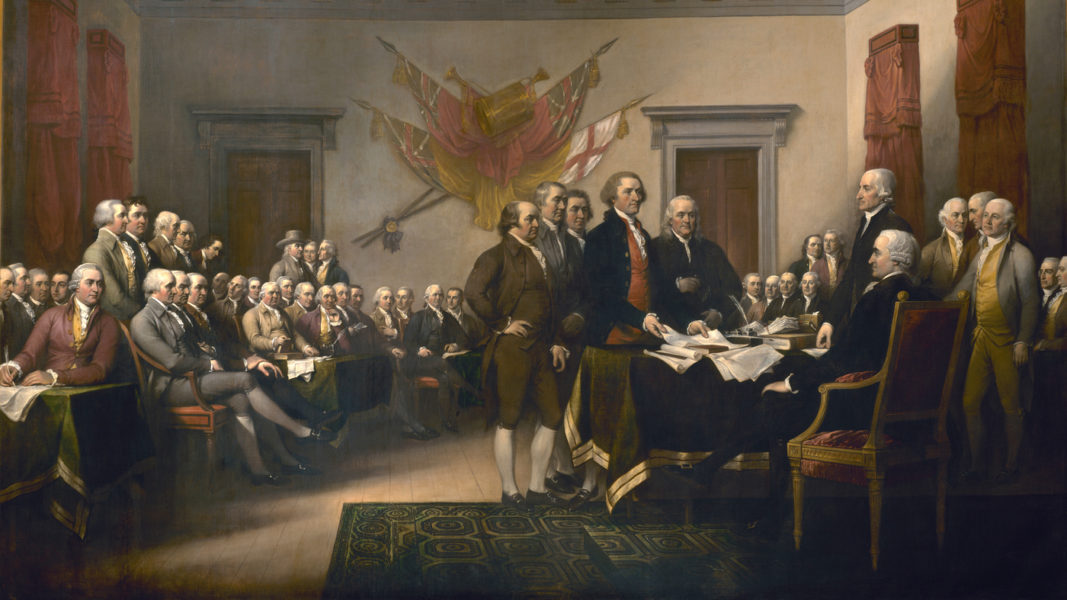 Thomas Jefferson, the principal author of the Declaration of Independence, is shown placing the document before John Hancock, president of the Congress, in this painting by John Trumbull.

I reckon there’s a reason this here column is titled, “Don’t Rush Me.” Never one to “rush” into any situation, my timeliness on issues great and small tends to fall on the late side. This week’s edition is no exception. Hey, did you know last week (Oct. 6-Oct 12) was National Newspaper Week?
It’s true, last week was the 79th annual observation of newspaper week. Since 1940, newspaper folks have patted themselves on the back for their wonderful duty as watchdog and defender of a free America. Sadly, as newspaper standings in the eyes of Americans wane, so has the knowledge of the First Amendment to the United States’ Constitution. Keep this in mind as an American citizen, your First Amendment articulates:
“Congress shall make no law respecting an establishment of religion, or prohibiting the free exercise thereof; or abridging the freedom of speech, or of the press; or the right of the people peaceably to assemble, and to petition the Government for a redress of grievances.”
Using the not so old internet for information, I ran across the “Think First — Know Your Five Rights” campaign. This campaign was developed last year by the Media of Nebraska group. From their website, ThinkFirstAmendment.org, I garnered some depressing statistics. Don’t believe me, take a peek below.

If over half of Americans do not know their fundamental, granted for just-being-born-rights, how can they know when those rights are usurped by a tyrannical government? I am a believer in understanding the First Amendment is key to protecting our free society, so here’s a little breakdown from the aforementioned website about each of the five rights.
Freedom of Religion does not protect you from suppressing, attacking, harassing or discriminating someone else’s beliefs. This freedom also does not protect harmful, violent or threatening actions tied to any form of religious beliefs. You own your religious liberty, your beliefs and whether or not you practice a religion, with the protection of interference, involvement or penalty from the government. As long as your worship is not violating core constitutional principles or harming others, then you are embracing this right correctly.
Depending on the delivery of speech or expression, there can be consequences, as the Freedom of Speech does not protect you from libel or slander. You, as an American citizen, have the freedom to exercise this right peacefully without government interference. These include all forms of speech, even those that can be objectionable to groups or individuals . . . it also ensures government does not have a right in forbidding us from saying, writing or expressing what we like.
Freedom of the Press protects the right to report news or circulate opinions without censorship from any form of government or law . . . this critical right allows people to gather news, information and opinions from a variety of mediums, but a free media also acts as a watchdog with the capability to report on government wrongdoings.
The Freedom to Peaceably Assemble is a nonviolent resistance or action with a goal of advocating for or achieving change. This right has been exercised throughout the history of the United States . . . It’s far from radical. It’s safe. It’s nonviolent. And it’s your right as an American citizen. This right includes a very important keyword: peaceably.
The Freedom to Petition is the freedom to encourage or disapprove government action through nonviolent, legal means. This fundamental freedom enables you to stand up and speak out against injustices or policies affecting you or in which you feel strongly. This right can be exercised by gathering signatures for ballot initiatives, lobbying, peacefully assembling, email campaigns, letter-writing, filing lawsuits and picketing.
So, know your rights, or as they say, you might lose them.
Send comments to DontRushDon@gmail.com