‘The State of the Township is strong’

Orion Township is a strong, safe community, rife with business and infrastructure development, recreational opportunities for residents and new projects on the horizon.

But it is the people who live and work within the community who make it a special place. 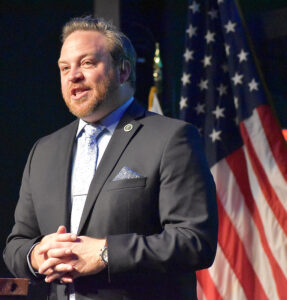 That was the message Orion Township Supervisor Chris Barnett conveyed during his annual State of the Township address in front of hundreds of guests on Wednesday at Woodside Bible Church.

“It is my honor and privilege to tell you that the state of our community is as strong as it has ever been,” Barnett said. “And we are only getting better.”

The 2022 State of the Township highlighted the new businesses coming to Orion, road projects, how residents rated the community and job creation.

“I don’t know about you all, but I am charged up. I’m excited that you are plugged in, yes, to what’s happening in our community,” Barnett said. “I say this every year: we have a great story to tell and I’m the lucky one that gets to tell it. But it’s not my story. It’s your story. It’s our story.”

One of the biggest stories of the year is General Motors’ $4 billion investment into the Orion Assembly Plant on Giddings Road.

GM, the largest employer in the township, announced in 2018 that it would build the all-electric Chevrolet Bolt in Orion.

In January 2022, GM announced that Orion Assembly will become the second U.S. plant building the Chevrolet Silverado EV and electric GMC Sierra and GM will invest $4 billion to convert the plant for the production of full-size EV pickups.

“GM has decided to plug into Orion Township and in a big way,” Barnett said.

The investment is part of GM’s effort to lead in the electric vehicle (EV) industry. By the end of 2025, GM wants to have more than 1 million units of electric vehicle capacity in North America, according to the company.

The investment is expected to create 4,000 new jobs and retain 1,000 other jobs.

“In that one site, they are building nearly three million square feet and renovating the plant to be the platform of the future. GM is changing the game. They’re moving from automaker to platform innovator and they’re doing it right here. This made international news, talked about all over the world.

“But let me state clearly one more time: the epicenter of the nation’s new economy is right here, in Oakland County, in Orion Township, Michigan,” Barnett said, adding that when he met GM CEO Mary Barra in Lansing for the announcement he told her, “Thank you for choosing Orion, we won’t let you down.”

For the fourth year in a row, the University of Michigan College of Business iLabs rated Orion Township a five-star community in its 22021 eCities rankings.

“Jobs, jobs, jobs. This has been a high focus of mine since I took office 10 years ago,” Barnett said. “This program scores municipalities on creating inviting business environments and entrepreneurial growth opportunities. There are about a hundred five-star eCities in all of Michigan and thanks to our team we are one of them. And those efforts are paying huge dividends.”

Other new developments include the new Meijer Express on M-24, American Battle Solutions plans on doubling its workforce and ESYS, a company that assembles robotic assemblies, will build on Brown Road, Barnett said.

Road projects include repaving Waldon Road between Joslyn and Baldwin roads, paving Squirrel and Dutton roads this summer and Maybee Road from Baldwin Road to the border with Independence Township will be paved.

In 2023, Waldon Road from Baldwin Road to the Independence Township border will be paved.

Barnett noted that the “most important people” are the “people we serve.”

“I think the most important job we have as elected officials is to actually listen. What a novel concept folks, write that one down. And I think you’ll see that we’re doing just that,” he said.

Barnett pointed to the results of the Orion Township community survey that ran until the end of 2021, asking residents to rate several factors in the township.

According to survey results, 95 percent of respondents rated Orion Township favorably “As a place to live.” Other top ratings included: Overall quality of life, 91 percent; as a place to raise and educate children, 90 percent; as a place for play and leisure, 89 percent; overall image of the township, 82 percent; and overall sense of community, 81 percent.

“It’s very clear that our residents love where they live,” Barnett said, noting that the township prioritizes and scores high on outdoor activities and recreation. “We’ve been recognized by the State of Michigan as one of only 11 Pure Michigan Trail Towns. That’s 11 out of 1,773 communities in the entire state. We’re one of only two in southeast Michigan.”

Recreational creation includes turning the site of the old township hall into three sand volleyball courts and a general sports court that the township will convert into an ice rink in the winter.

Also this summer, the township is building an outdoor adult fitness center at Civic Center Park, tennis and pickleball courts at Friendship Park and expanding the beach on Tommy’s Lake at Camp Agawam.

“We listened to what you said and we realize that you place a high value on parks,” Barnett said.

Residents rated their overall satisfaction with the township at 90 percent.

‘The State of the Township is strong’ added by mmkelley on May 11, 2022
View all posts by mmkelley →