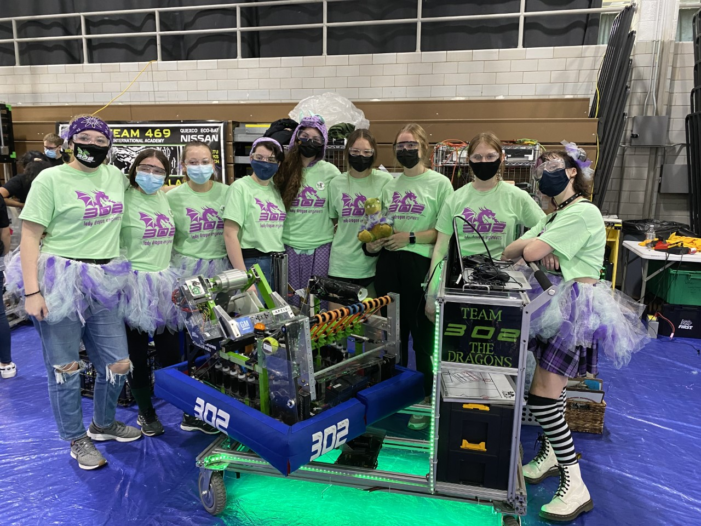 The Lake Orion High School’s Lady Dragon FIRST Robotics Team blazed toward competition at an annual Girls’ Competition (or “Girls’ Comp” for short) for the past six years.

Students both on and off Lake Orion High School’s varsity robotics team, Team 302, competed to bring awareness of FIRST and STEM education for women.

The rules of Girls’ Comp are simple: play the previous year’s game—this year being Infinite Recharge—with a team of all girls. Be it in the pits, driving the robot or scouting in the stands, the boys of the team are not allowed to touch anything. Sure, they can cheer in the crowd, but when it comes down to the robot, it’s the girls’ turn to shine.

“I learned about how the game works,” said sophomore Sierra Manriquez, “I made some very close friendships with the others on the team.”

This is Sierra’s first year on Team 302, and her first ever competition.

This year, the Girls’ Competition was hosted at Bloomfield Hills High School. Thirty-two FRC teams competed against each other for bragging rights — and a trophy.

“It was fun… I learned how to adapt under pressure, and perform under stressful situations,” said sophomore Erin Ply, who was the co-pilot for the Dragons’ robot. This is her second season on the team, but her first year at Girls’ Comp.

This was senior Jae Young’s third year at Girls’ Comp, and fourth year at a girl-only event.

“Girls’ Comp has empowered me as a woman in a male dominated field; that I am more than worthy of the position that I hold on my team, and… taking over for the boys who dominate the team,” Jae said. “I get to empower other girls to do what I did, and let them feed off of my confidence because that’s what Girls’ Comp gave me.”

Jae was also awarded a scholarship at the event for her involvement in FIRST.

This year, Team 302 scored exceptionally well. Not only were they the winning alliance captain, but they went undefeated throughout the day, holding the highest score overall at a total of 203 points.

Overall, this event was an immense success for the Lady Dragons and we are looking forward to competing in the upcoming Fast Forward season with the entire team.

The Lady Dragons of LOHS Robotics Team 302 scorch opponents at all-girls comp added by mmkelley on November 17, 2021
View all posts by mmkelley →