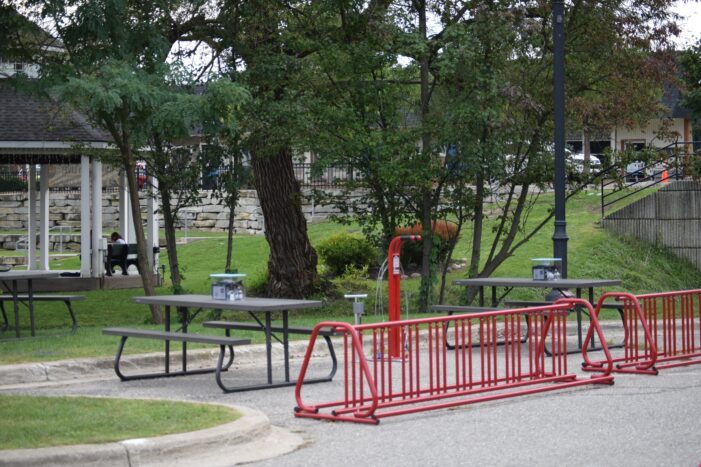 For several months now, Lake Orion’s Downtown Development Authority has been taking steps toward placemaking in the downtown, with placemaking projects ranging from an outdoor sound system to outdoor seating including the purchase of picnic tables for the downtown.

During their Sept. 8 meeting, the DDA board made their seemingly final attempt at allocating picnic tables but were ultimately unsuccessful, yet again.

With several downtown restaurants scrambling to provide outdoor seating for their customers, it became increasingly obvious that the downtown was in need of some sort of outdoor seating arrangements.

On June 9, the DDA board tabled discussion for placemaking projects that included picnic tables, a sound system and barricades because they were unhappy with the amount of bids received.

Thus began an uphill battle for picnic tables in the downtown.

By their next meeting on July 14, the original bid made by Home Depot at $160/table was no longer available and by their Aug. 11 meeting, it seemed as though purchasing the proper picnic tables was going to be nearly impossible as most distributors no longer had them available.

Talks of purchasing wooden picnic tables that did not fold and, therefore, could not be easily stored in the winter; or, using the tables until the season was up and then selling the tables were ultimately put to rest without much additional discussion.

The likely final conversation of the year in this picnic table issue came last week during the Sept. 9 DDA board meeting.

Out of four distributors, only one, Uline, had inventory that was ready to be shipped once a purchase had been made. However, each picnic table would run the DDA $279, up nearly $120 from the bid received by the DDA in June.

The Uline bid being the only tangible bid available stirred up discussion on whether, with summer coming to a quick end, it would even be worth it to purchase the tables now.

“Personally, I think I would wait,” said Lloyd Coe, DDA board member. “I’m down here quite a bit…and I don’t really see the tables being fully utilized except on the days where the restaurants are busier, like on Fridays or Saturdays, or if we have some kind of event going on. And the weather’s going to be getting colder.”

Both Village Council President Ken Van Portfliet and DDA Chairperson Debbie Burgess agreed with Coe, effectively ending the discussion on picnic tables for the time being.

Also at the meeting:

The board approved a bid from M&B Graphics for social district signage. The motion to not exceed $1,800 passed 5-0.

The DDA received two additional bids: one from Action Traffic Maintenance in the amount of $2,075, and a bid from Fast Signs for $3,305.

Dining areas have been set up around the downtown in the Flint St. Alley, outside of Fork N’ Pint, overlooking the creek by Wine Social and by the creek in Children’s Park.

The great picnic table conundrum comes to an end; social district signage approved added by mmkelley on September 16, 2020
View all posts by mmkelley →