The deplorables and their language 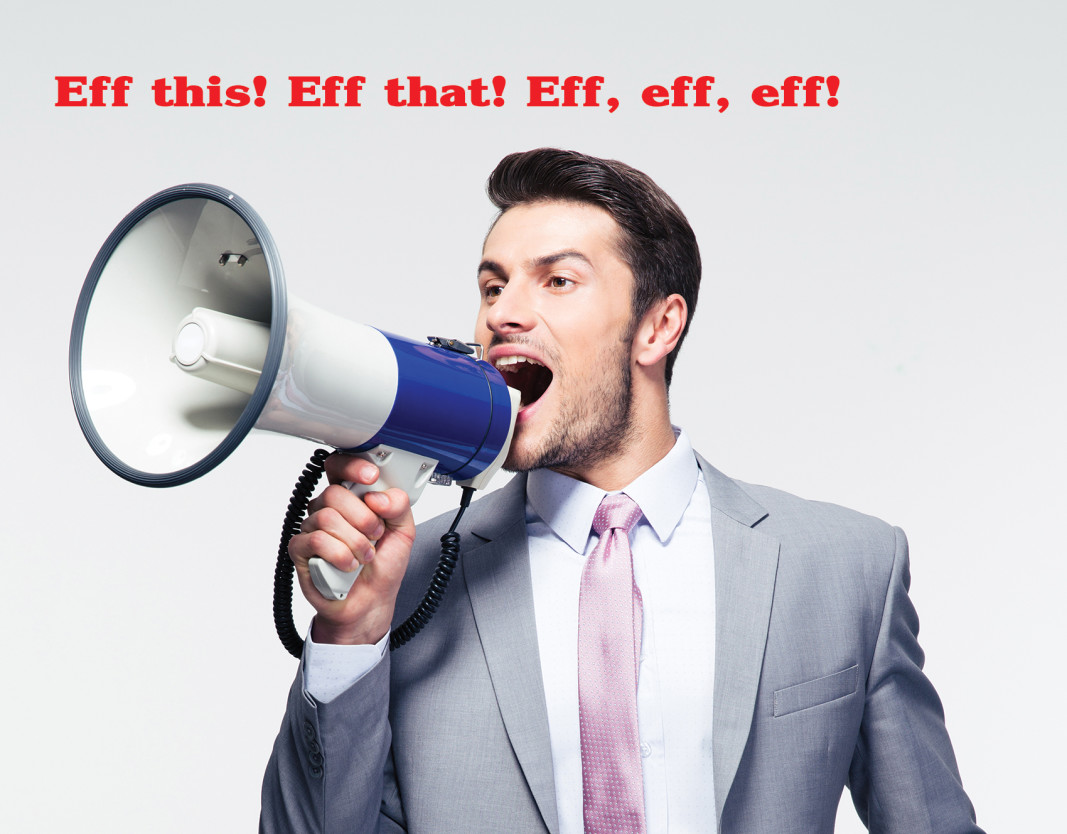 So, there I was. Taking in my routine Saturday morning breakfast with a cup of coffee, a glass of ice water and a copy of both The Detroit News and The Detroit Free Press. Before me, plated in between the papers and the drinks, scrambled eggs, refried beans, rice and chorizo sausage, topped with copious amounts of salsa.
I love that early-ish morning routine. Good eats, with two newspapers to read is my favorite way to start the weekend. And, yet this past Saturday with a third of my breakfast still on the plate, I wadded up my napkin, threw it on the uneaten (and therefore wasted) food, pushed said plate away, pulled out a fiver and a ten spot from my pocket, placed it under the unfinished cup of black coffee and left.
What in the world has happened to Americans? Why have we become filthy-mouthed pigs?

What happened, Don?
See, about four seats from me, two other 40-year-old-ish gents in baseball caps and camo wear were having their breakfast and in the 15 minutes I was there to eat and read, one of the dudes used the “eff” dash, dash, dash word at least 50 times. I know because I stopped mentally counting after the 40th eff-bomb. And, it wasn’t like two guys talking together quietly and discretely. It was loud and proud for the entire restaurant and all its patrons to hear.
The one guy did not care there were women and old folks and others sharing in his profane proclamations over the displeasure he was experiencing at home.
On a number of occasions in my adult life I have asked guys (and it is always guys) to tone down the language — especially if kids were in earshot. Luckily for me, those I’ve confronted were a little embarrassed and thanked me. Issues closed. I wasn’t feeling so lucky Saturday, so I decided to not make a scene and left the restaurant shaking my head in frustration. This wasn’t a locker room. This wasn’t at work, the bar, man-cave, nor pool hall. This was Saturday morning at a family restaurant. Maybe I was shaking my head in sadness, too.
How did we become such a self-absorbed, disrespectful people?
I know, I know. You’re saying, “Don, how did you become such a namby-pamby prude? Lighten up!”
Rest assured my minions, I’m not weak, feeble nor spineless and I have and do, when occasion calls for and allowed, use colorful metaphors to express my thoughts.

That said . . .
. . . Dear Old Dad (rest is soul) hammered this (and a bunch of other stuff) into his only son’s brain: You DO NOT swear in the house and never in front of your mother or other women. When I was still younger than in my teens, I saw my dad get in a fight once, the reason was because the other guy was using the “eff” word while both mom and we kids were close.
I first heard that word, oh I guess when I was about five, at the neighbor’s house and not knowing what it meant said it in my house. The punishment was swift and clear. Dear Old Mom did put some soap in Young Master Rush’s mouth and I had to sit on the couch in timeout prison for like a year. Thankfully, she didn’t tell Dad.
When I was a younger man, just starting out at the ever-lovin’ Oxford Leader newspaper, then Detroit mayor, Coleman Young, used to invite suburban reporters and editors to the city. It was a public relations gig to highlight all the awesome things going on in Detroit (aside from Devil’s Night arson, deteriorating neighborhoods and verbal sparrings with TV news anchor Bill Bonds).
We were way up on the umpteenth floor of the Renaissance Center and somehow I found myself in a conversation with Hishonor. I do not remember how the subject came up or the context, but I do remember him telling me, “You can’t do it all the time, but every once in a while you gotta’ throw in a couple of ‘g-d’s’ in there to get their attention.”
He smiled, then did his famous, mischievous chuckle, “Heh-heh, heh.”

Lazy communication skills
I remember trying to drill into my sons’ heads they didn’t need to cuss to get a point home. That cussing showed the lowest intellect whilst communicating; however, if you must cuss, do it so infrequent that when you do, people will take notice and know you truly mean business. Funny, just thinking about this as I type: For the most part, I still do not swear in front of the boys even though they are now young men of voting age. When I do slip, my insides do a little flip. Guilt.
Here we are. The President is a disrespectful Tweeter (whose thumbs need a spanking) and we have Congresswomen calling the President a mother “eff” er in front of the world, and young children. She needs her mouth washed out with soap. They both needs lessons on respect.
Rats. I guess if our leaders are disrespectful to each other is it any wonder then we are disrespectful to each other? (Who says the trickle down effect doesn’t work?)
No answers. No going back. Guess I’m just an out of date, un-hip dinosaur. Nuts.

The deplorables and their language added by Don Rush on January 9, 2019
View all posts by Don Rush →