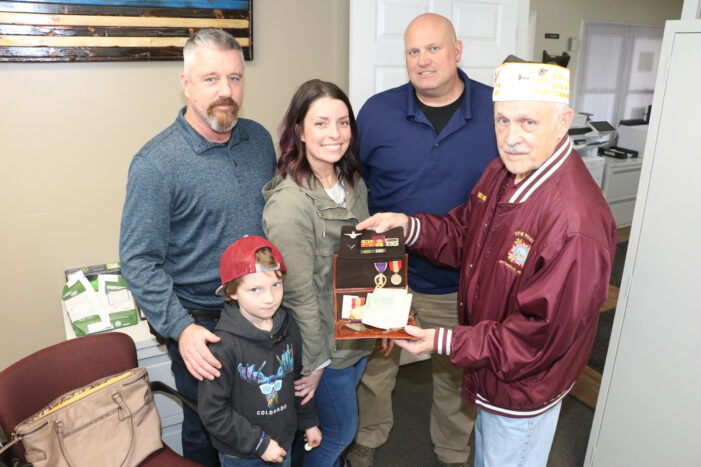 On Friday, March 25 Angelyn Smith along with her son Ryder made the 240 mile trek from Warsaw, Ind. to reunite with her deceased father Bruce Dominguez’s war medals, recovered by the Oakland County Sheriff’s Office Det. Paul Buhl along with Det./Sgt. Rich Hubble of the Brandon Substation.

“I’m so thankful, I just can’t express gratitude for finding dad’s medals,” said Smith. “I’m so overwhelmed. What are the odds of this happening? I was so excited to come up here. It’s been so long, five years.”

Smith was contacted by Det. Buhl after a police investigation recovered the Vietnam war medals along with other stolen items following a bust in southern Brandon Township earlier this year.

“I am honored to have been given this opportunity to serve the Dominguez family,” said Buhl.

At 17-years-old, Dominguez, a Royal Oak native, enlisted in the Marines in 1970. He served four years, which included three tours in Vietnam as a machine-gunner. Dominguez was wounded in the leg during one of the many battles during his stints. He was discharged in 1974, and awarded a Bronze Star, Purple Heart, National Defense service medal along with a Vietnam Service Medal, with combat action ribbon.

“Dad said they tried to kill me three times and I’m not going back,” recalled Smith. “So he got out.”

The medals along with other military documents from his duty were returned on Friday. Ortonville VFW Post Commander Dennis Hoffman presented the medals to Smith at the Brandon Substation.

It had been almost five years since the medals were removed from Dominguez’s home following a tragic accident. On June 28, 2017 Bruce along with wife Kathy Dominguez were killed in an explosion that leveled their Orion Township home. The couple’s middle daughter Kymberly was also in the home at the time but survived. While details of the incident remain sketchy it was determined a propane leak in the home may have caused the explosion. The collection of medals was somewhere in Dominguez home or nearby building when it exploded. Smith assumed the small leather case of medals along with other military documents was lost in the explosion or removed from the property.

“When the house was still engulfed in flames, people broke into dad’s barn which was on the property,” she said. “The looting occurred three times when people came back to steal items. Dad’s pole barn was ransacked—I had no idea he even had these medals. Dad was a building contractor and had decades of tools, bikes along with other collections.”

At some point after the explosion, the folder of medals were removed from the home. Due to the nature of the fire only a few family photos were the only personal items ever recovered from the scene. The cause of the explosion remains unresolved.

“We were so well taken care of by the community,” she said. Following the explosion the community of Lake Orion Township raised more than $30,000 through a GoFundMe to help the family with expenses.

“We have no uniforms of my dad’s or anything,” said Smith. “The medals were things dad actually held. It’s a current memory of dad.”

The return of the medals was even more significant for Smith. A 2004 Lake Orion graduate, Smith has a military background serving 11 years from 2007-2018 in the U.S. Air Force as a fighter jet mechanic—tech sergeant E-6. She had four tours overseas including Italy, Afghanistan and Korea.

Angelyn has been married to six year Air Force veteran Chris Smith for seven years. The couple has two children Ryder,6, and Aiden, 3.