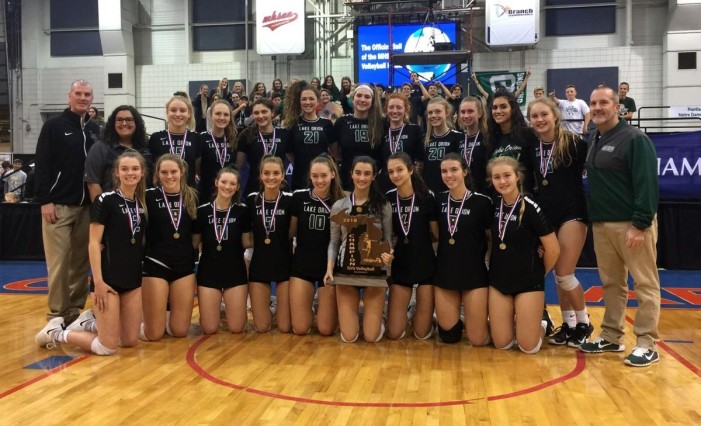 After their win against Stoney Creek to clinch the regional trophy, the Lake Orion girls volleyball team seemed to be in a pretty decent spot going into states later that week.

The state tournament is held in Battle Creek every year and going to Battle Creek is consistently high on Lake Orion’s list of goals at the beginning of the season.

Reaching this milestone in the post season is something many teams strive for but only a handful achieve.

After the match against Stoney Creek, Lake Orion, ranked second in the state, moved on to face the no. 17 team, Flushing, in the quarterfinals in Fenton on Nov. 13.

Paige Briggs led the team in kills with 13, closely followed by Sydney Smith with 12. Wren Macaulay led in aces with 3 and also in assists with 28, and Ciara Livingway lead in digs with 23.

The sweep of Flushing took Lake Orion to the semi-finals but the road to the finals wasn’t going to be a smooth one. Lake Orion was matched against the no. 1 team in the state, Farmington Hills Mercy, in the state semifinals.

The Dragons had gone head-to-head with Mercy four times during the regular season, with Mercy coming out on top three out of the four times.

Lake Orion, however, was ready for a tough match.

“We had a game-plan to try to slow them down but the main thing was we just knew we had to play much better than we did the last time we played them,” said Lake Orion head coach Tony Scavarda.

The Nov. 16 match against Mercy started out rocky for the Dragons. They lost their first set, 20-25, but were able to get their game together by the end to continue that momentum through the next sets.

It was all down to the fifth and final set, a set Lake Orion was able to bring home with a winning score of 15-13, sending the Dragons directly to the state finals against Rockford.

“For Rockford in the final we decided to play them very similarly to Mercy as far as the game-plan goes. Their offense is similar to Mercy’s as they utilize a great outside hitter and set her in a variety of spots. We didn’t really need to change much just play at a high level,” Scavarda said.

Briggs had a whopping 44 kills and Macaulay had an incredible 60 assists against Mercy.

The following day, Nov. 17, the girls had their eye on the prize; the state championship was closer than ever.

The match against the Rockford Rams was well fought. Lake Orion won the first two sets 25-18 and 25-23.

The Dragons lost some momentum in the third, falling to the Rams 23-25.

But the Dragons fought back and put the game away with a 25-16 win in set four, earning the team the state championship.

“The feeling after winning the championship is hard to describe — very excited and proud. A little bit of shock that we got it done because you never realize just how hard it is to do until you are actually there in the mix, but also relief. This is something I have been striving for since I have been here and I did not want another good opportunity to slip away,” said Scavarda.

“I was very proud of how these players were able to compose themselves in very high pressure moments and pull through. (I was) also extremely happy that we were able to send our ten seniors out this way,” he said.

“It means so much to have won the first volleyball title at Lake Orion. It is such a great school and community. Everyone was pulling for us to get it done. We are really grateful for all the support. There are a couple things that set this team apart from other talented teams we have had here. One is the fact that this team has really good chemistry with each other on and off the court. They all seem to compliment each other well. Another thing is they are very determined group. They battle no matter what the situation is,” Scavarda said.