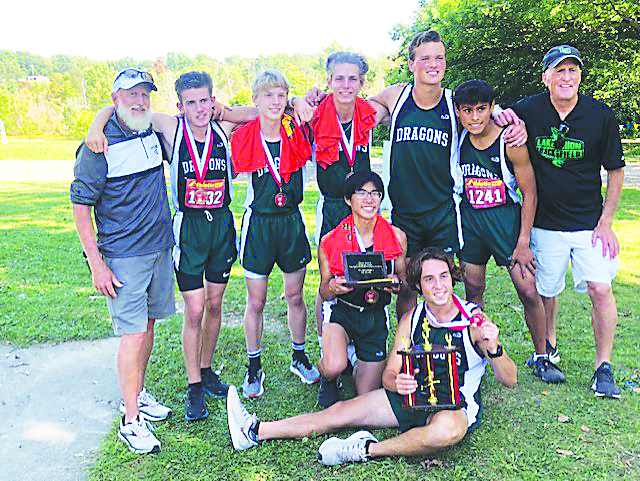 Coach, teacher, mentor, friend to generations of Dragons lays down his clipboard

By Megan Kelley
Review Writer
Lake Orion High School track and field coach Stan Ford was named Lake Orion High School’s Spring Season Coach of the Year.
Ford’s was recognized during the LOCS Board of Education’s regular meeting on June 22. The announcement was made by LOHS Athletic Director Chris Bell.
It was also a bittersweet farewell: Ford announced he would retire from coaching after the track and field season this spring.
Ford has worked in the Lake Orion school district for more than 40 years, filling a variety of roles as both a teacher and a coach for both cross country and track.
In his tenure as coach, he has been part of 42 championships (league, district and regional) and has led the boys track team to a state championship.
This spring, the boys track and field team won their 10th consecutive OAA Red championship.
In the fall, Ford took his cross country team to the state championship finals, finishing tenth in the state.
Ford spent 41 years as coach of the track and field team and 40 as head coach of the cross country team.
He can still be seen jogging around downtown Lake Orion on a regular basis.
“Coach Ford (is) one of the best coaches regardless of any sport. You talk about an icon and a gentleman who has had an impact on our student body and in terms of the development of our young men and our young ladies, he’s a great example to all coaches that come through and he’s a tremendous loss to us,” Bell said. “You just don’t replace a Coach Ford.”
Ford was joined by his wife, Rosemary.
“With him, every step of the way, has been his wife, Rose, because when one coaches, the spouse is married to the sport as well, that’s just the way it works,” Bell said.
“Rose has been a huge supporter of our programs, a volunteer whether she wanted to be or not at all the big events we hosted. So, we really appreciate her as well.”
Ford took a moment to say a few words about his time and what he’s taught his athletes and the example he’s provided them.
“I think behavior is stressed with our kids in who we represent. They represent themselves, they represent their families, they represent me. I’m the one that gets the phone call when they’re misbehaving at Eva’s in the summertime because people know who you run with,” Ford said.
“It’s been an ongoing thing and I look at the fact that we’ve chosen to live in Lake Orion because I wanted people to see everything. I didn’t want to live outside the district and be able to behave anyway I wanted to. I wanted our behavior as a dad, as a married couple, to represent Lake Orion. So, it’s been a pleasure and will be missed,” Ford said.