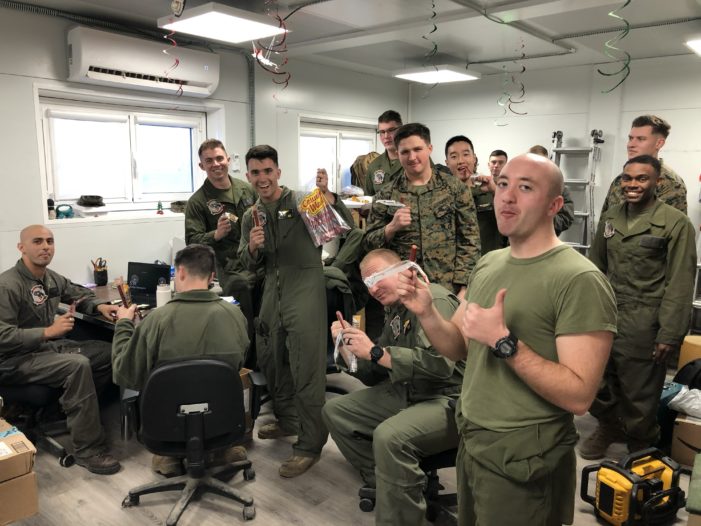 Students in second and fifth grades and middle school, along with members of Cub Scout Troop 186, collected 11 boxes of coffee, Christmas lights, hot sauce and other items for the squadron.

Wild Geese is the squadron’s call-sign. More than 800 marines are stationed in Spain to “provide support to North Africa in the event of any kind of crisis (like natural disasters),” said Jones. “We also spend a lot of time training with other nations’ militaries. We have worked with Spanish, Portuguese, and French military forces so far.”

In a letter to the students, Jones expressed his appreciation for the gifts.

“We all miss our families and friends greatly, and receiving the thoughtful cards and gifts is absolutely wonderful,” he said.

Kristina Jones, Paul’s wife, said she was approached by second grade teacher Kim Klozik, who asked whether the students could do a service project for the marines.

Postage for the boxes was paid for by GreenAway Removal, a company owned by Vaughn Giwa, wife of St. Joseph School secretary Jean Giwa. Earlier, eight boxes of candy donated by the students also were sent to the squadron, with postage paid for by Wendy Dell, physical education teacher, and the student council.

St. Joseph students put together Christmas packages to send to U.S. Marines added by mmkelley on January 8, 2020
View all posts by mmkelley →