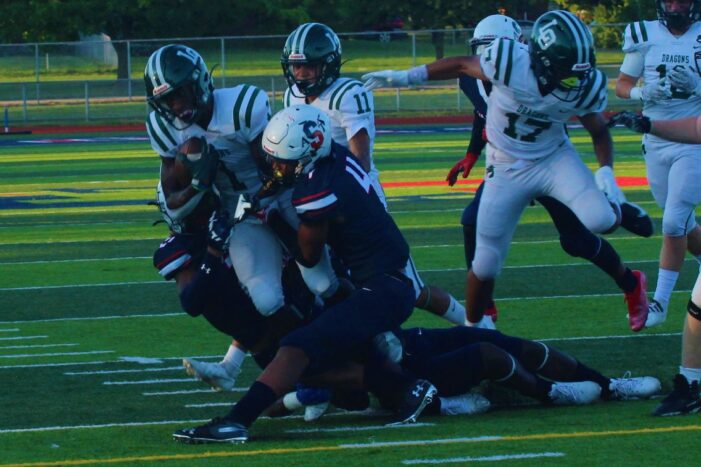 For much of the first half of last Friday’s football game, Lake Orion and Southfield A&T traded blows in a back-and-forth slugfest.

The game was tied at 14-14 with a little over five minutes left before the break. Each team had scored on long drives and big plays. Both defenses made big stops.

But the Warriors scored twice in two minutes to take control of the game, enroute to a convincing 40-21 victory over the Dragons.

The loss dropped Lake Orion’s record to 1-2 (0-1 OAA Red), with its rivalry game against the Oxford Wildcats coming up this week.

“I was very happy with our effort, which was drastically improved from the previous week,” said head coach John Blackstock. “But you still have to put everything together for four quarters, especially against a team like Southfield, and we didn’t do that.”

The Dragons started the game with plenty of energy, taking the ball 60 yards in seven plays on their opening possession, capped by a seven-yard touchdown pass from Kyler Carson to receiver C.J. Witt, putting Lake Orion up 7-0.

Southfield responded later in the quarter with its own long drive, covering 80 yards and tying the game, 7-7, on a short pass.

The Dragons landed another blow on the first play of their next series, with Carson throwing a 64-yard touchdown to running back Dorian Hill, to put Lake Orion back on top, 14-7.

Southfield answered with its second long drive covering 60 yards, knotting up the game at two touchdowns a piece. At that point, it felt like whoever had the ball last would win the game.

With 5:41 left in the half, the Dragons started their next drive on the Warriors’ 45-yard line, thanks to a penalty assessed on the kickoff. They moved down the field, but failed to capitalize, missing a short field goal with 2:16 left before the break.

“I wanted that to be the final drive of the half, with either a score or field goal,” Blackstock said.

Lake Orion then turned the ball over on downs near midfield with less than a minute left. Southfield completed two long passes and scored again with 18 seconds left, to go up, 26-14, at halftime (two-point conversion missed).

The Dragons breathed a little fire to start the second half, with defensive back Korbin Smith intercepting the ball on the first play from scrimmage. Lake Orion could not take advantage of the turnover, however, and punted the ball deep, pinning Southfield on its own two-yard line.

The Warriors then mounted a 15-play, 98-yard scoring drive, taking a commanding 33-14 lead.

After a Lake Orion turnover, Southfield added another score early in the fourth quarter. The Dragons did put together a long drive, highlighted by Carson’s 40-yard run and then a short dive into the end zone, to finish the scoring with six minutes left, 40-21.

Lake Orion’s quarterback finished the night 10-20 for 179 yards and two touchdown passes, plus 41 rushing yards and the late score. Blackstock said it was one of Carson’s best games.

“He did a nice job making the right decisions,” the head coach said. “His read-runs are getting better and he hit some open receivers with nice balls.”

Lake Orion’s defense, on the field for more than 31 minutes, was led by defensive back Stephen Brown’s ten tackles; Witt had nine. The Dragons held the Warriors to 84 yards rushing.

The head coach admitted, though, that the secondary must stop giving up big pass plays. “Those really have hurt us this season,” he said.

After three games, Blackstock said the team is still trying to find its identity on offense, which is not surprising given the team has a new offensive coordinator.

“Are we a throw-first or a run-first team,” Blackstock said. “We came out throwing the ball well against Southfield, given they loaded up to stop the run and had man coverage.

“But we ran more in our first games. We have to be more consistent rushing the ball, both on the interior and perimeter.” (The Dragons only rushed for 83 yards total against Southfield.)

Lake Orion returns home this week to play rival Oxford in the annual Pink Out Game. The Wildcats are winless on the season, but gave defending state champion West Bloomfield all it could handle last week. The Wildcats led in the fourth quarter before falling to the Lakers, 41-31.

“Oxford is putting some points on the board,” Blackstock said. “They are playing well fundamentally and have a physical run game. They can also throw the ball when needed.”

Lake Orion’s coach said the Dragons must feature a more balanced offense against Oxford and eliminate giving up big plays on defense.

“I’m really looking forward to the home game,” Blackstock said. “The whole team is, with a big crowd on hand for the Pink Out festivities plus first responders.”

Southfield knocks out Lake Orion in football action added by mmkelley on September 15, 2021
View all posts by mmkelley →