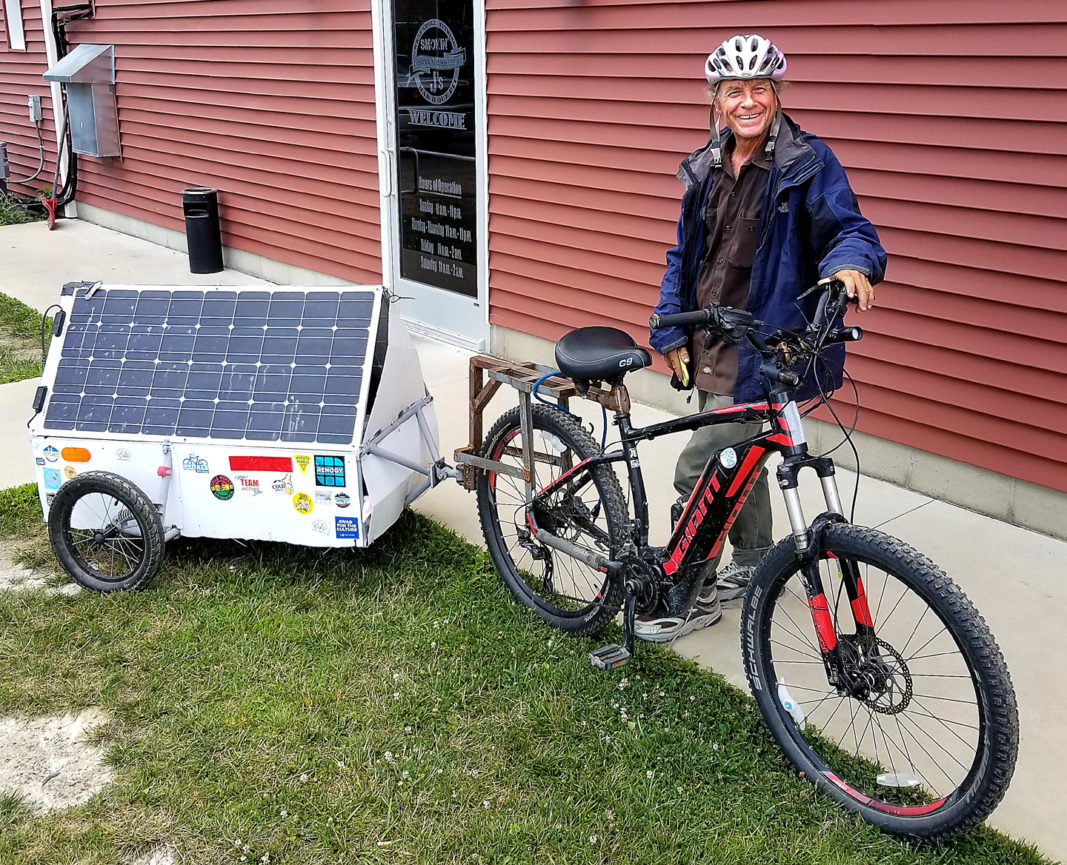 By the time this sweet edition of the ever-loving column, often referred to as Don’t Rush Me is published and out to the masses to read, Solar David O’Neill will probably be relaxing with family with either in Buffalo, New York or Riverside, California.
You’re probably wondering why I, Dandy Don Rush (your hero) am writing about this dude and further you probably want to know who this dude is. Relax. I’m getting there.
Solar Dave, as I like to call him, is an interesting cat.
Late Thursday afternoon, August 8, David rode into Goodrich, Michigan, USA on his “e” bike, pulling a little, custom-built aluminum trailer, wearing a well-weathered blue windbreaker jacket and bicycle helmet.
I was sitting at a table in Goodrich’s only BBQ joint (Smoking J’s) when Solar Dave walked by and saddled up to the bar to order a glass of beer. “I’ll take whatever your finest light beer is,” he told the lass behind the bar.
Soon, we all discovered Solar Dave had been riding his bike since June 23. That’s when he left his hometown of Riverside, en route to Buffalo. By the time he finished his journey, he said, he would have traveled between 2,400 and 2,500 miles.
“Google ‘David’s Solar Journey,’” he said. “My son is posting my video blog and taking care of social media.”
He’s camped out in parks and people’s yards along the way. His first night in Michigan was Wednesday, Aug. 4, where he spent the night in the small town of Jones. From Jones, he rode to Dearborn before heading to the Detroit Bike company in Detroit. On his Facebook page, Solar Dave’s son posted, “Today David had some delicious Lebanese food at the Dearborn Meat Market in Dearborn, Michigan! @dearbornmeatmarket had some of the best food David has had on his trip! #davidssolarjourney @ Dearborn Meat Market.”

He stopped in Goodrich en route to Crossroads Village in Flint. Apparently, the vintage amusement park carousel at Crossroads, was the same one from his hometown. On Sunday, August 11, I saw this post on Facebook by Brendon Walsh, “This evening I went out for a quick trail ride in Nixon, Ontario. I met David here and we rode together for about 8km to Simcoe. I admire what your doing and enjoyed our conversation. I will be sure to share your story with my cycling community here in Turkey Point, Ontario. Can’t wait to see what’s next for you guys. Hopefully see you on the road again!”
When he peddles to Buffalo, he will visit family and then fly home to California.
So, what is an e-bike and why the journey? E stands for electric. Solar Dave said, “I’m a promoter of e-bikes — they’ll be the mode of transportation in the future.” Inside the trailer he hauled a tent, sleeping bag and two batteries, which are charged by two solar panels. Each panel is about three feet by four feet in size, weighing a couple pounds each.
“I can get 40 miles a day of propulsion with those solar panels,” he said.
Solar Dave also used his journey to promote a couple of charities. One is Trips for Kids. It’s a national group helping kids get out on bikes to explore and find adventure. From that group’s website, “Every kid in every community deserves the opportunity to know the joy of riding a bike while enjoying the freedom to explore the natural world on two wheels. For some, this is their first venture beyond the boundaries of their urban neighborhoods!”
He also partnered with Be The Match, which is a “national bone marrow registry that helps build a network of registered donors for people with blood cancers to be able to match.”

Over mountains, through ranches and farms, David O’Neill’s solar journey has taken him on paved as well as gravel roads. His video blog on YouTube shows some pretty country. Check him out.
Send comments your comments for Don to DontRushDon@gmail.com