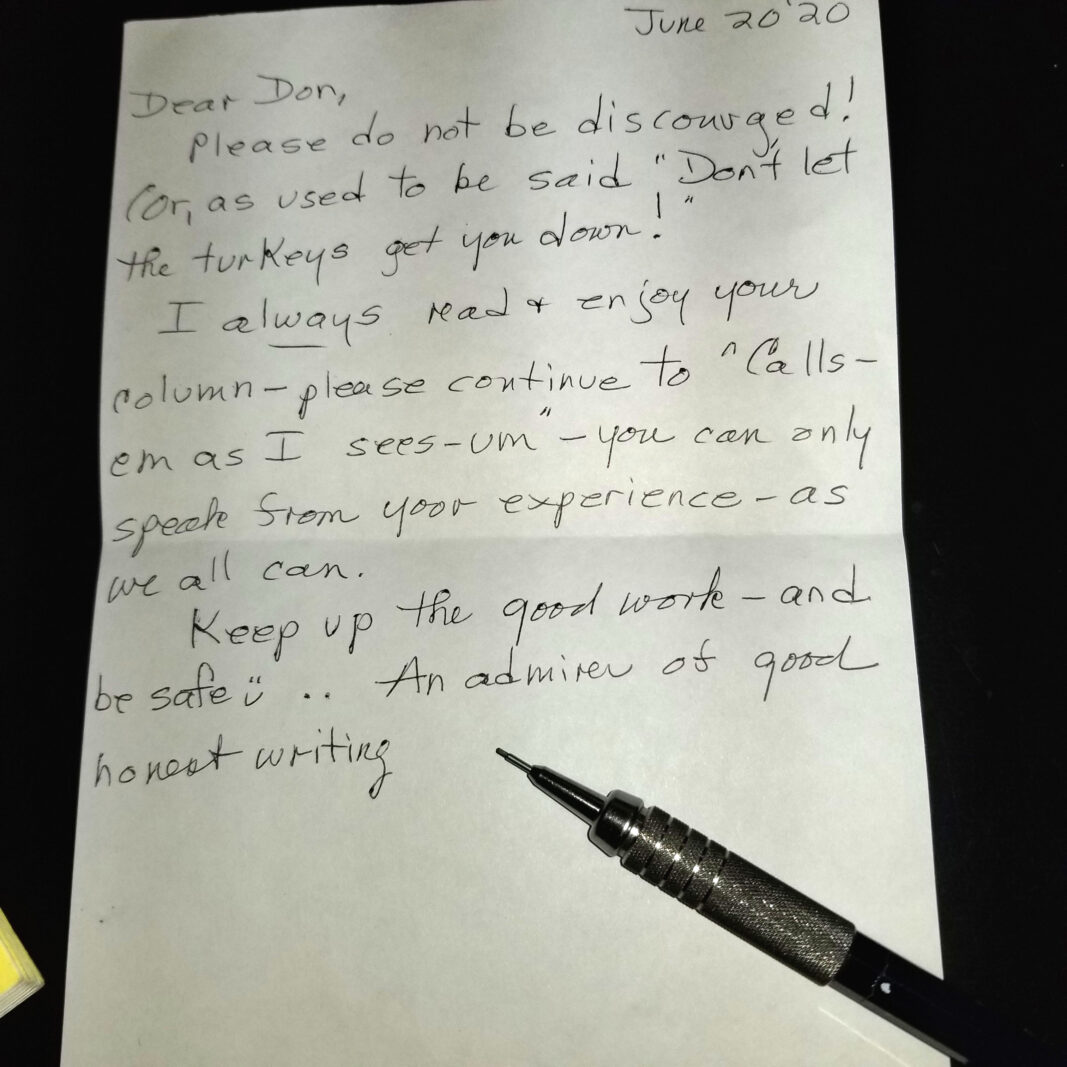 I must be getting soft (and, not just in the belly). It seems the older I get the softer I get in regards to demeanor. I prefer not to yell, jump up and down like an angry three-year-old, point fingers nor call people names (unless it’s actually their names). I think I know why, too.

I’ve always kinda’ gone against the expected grain. I’ve done things my way, even if it ain’t the right way. Speaking of right ways, the way to write political letters to the editor these days is to go against today’s societal norms. These days we’ve been brain-washed to believe the only way to express our political viewpoints is not to tout them, it’s to point fingers, call names and demean those with differing political views. It’s in the broadcast commercials we hear and see. It’s in the posts we read on social media. And, here at your community newspaper, we’re starting to get letters to the editor with that same “damn the other guy” writing style.

I know, I know. I know there are still some history buffs out there who know and who are gonna’ ring my chimes and say, “But, Don. Even back in the earliest years of this Constitutionally Limited Republic, politics has been dirty and ugly. Newspapers used to run articles defaming and possibly libeling people all the time. Stop being so soft. Why are you wimping out now, 240 years later? ”

For those not familiar with the term “Constitutionally Limited Republic,” what I am about to type might blow your mind. Many folks think I’m a far right-winged, loony-toon, neo-nazi because I have stated before the United States really isn’t a true democracy (where nine cannibals can vote to eat the tenth). The US is a constitutionally limited republic. This is not a “conservative” notion. Just the opposite, it’s a “political philosophy of limited government” where “government is limited in power.” And, it is a “key concept in the history of liberalism.” The creation of the US was a liberal idea. So, if I believe this, what does that make me – liberal or conservative?

Okay, let’s get back on track.

Why am I wimping out now, 240 years later when it comes to publishing letters to the editor for our community newspaper? As Liz Barrett Browning once wrote, “Let me count the ways.”

1. Because we are a “community” newspaper. Community is made up of people. People are neighbors and I would hope that they are good neighbors. I would promote civility in our community. Does yelling or screaming at your neighbor really make anyone feel good?

2. If it’s really popular on social media, it’s probably a good idea not to follow suit.

3. Letters attacking others often lead community newspapers to be sued for libel – most libel suits brought against newspapers are not from the articles they publish, rather from the letters to the editor written by someone else and published without first vetting said letters. I know lawyers are all sweet, cuddly wonderful people, but I’d rather not have to give them extra money to defend a libel suit.

4. Last, and most important, I am wimping out, because I can. If you don’t like it, tough. Go cry about the social injustices of one Donald Rush, Neanderthal Philosopher on social media if it makes you feel better. I am still not gonna’ run your letter.

We will publish your letter if it meets our “Letters Policy” which we run regularly. In these politically charged times where everyone is so passionate this can be challenging. So, I’m gonna make it easy for you. In your political letters, with reason, write why you are for something or someone, versus tearing down the opposing view or candidate. It’s best to use researched information versus copied pablum from some partisan source. Easy squeezy, right!

Include your name, your address and your daytime phone number. We will not publish your contact information, but we run letters from local people about local issues. If a letter is addressed from out of town or state and not really about something local, I feel no compulsion to run it. We use the phone number to verify you are the actual letter writer and not someone pretending to be you (which is easily done online).

So, there you go. Some tough love from the old softy. Be nice in your letters to the editor. Good voting to all!