So many thoughts, so little space

I know many a young, dapper man out there has looked up to me. Not for my sage, Neanderthal Philosopher wisdom, nor for advice on communicating, business, finances, love and liberty. No, no my friends, nothing so life-important have I been sought to be a mentor.
So, of course, I must be talking about my keen sense of fashion. Young men from hither and yon, far and wide and from here and there have followed my trail-blazing ways on the path of the fashionista. Fall starts the season of flannels and sweater vests and spring leads into short-sleeved shirts, khaki slacks and super-white sneakers. I know the women out there are starting to swoon, and I’m sorry ladies, I was born with this impeccable sense of style. It’s a blessing and a curse, but maybe I can be of help to your menfolk.
The only place to shop for men’s clothing these days is TSC (Tractor Supply Company). They not only stock long and short sleeved, checkered shirts, but also a large variety of blue jeans and overalls to fit even us “husky” guys. The super white sneakers can be picked up at the closest Meijer near you. And, when we get into summer the best place to find Hawaiian shirts is Sally’s Boutique aka, the Salvation Army.
(Guys part of being a fashion god is being thrifty: Spend less moolah on your clothes and more simoleons on your woman.) 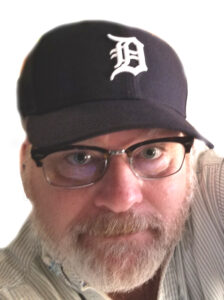 I saved up enough dineros this spring that I actually splurged on myself. I purchased two fitted Detroit Tigers baseball caps. Yup, navy-blue ball cap with the white old English D for when they play home games and a navy-blue one with an orange D for the away games. I’ve always wanted a fitted Tigers cap and now I have two.
Feeling pretty good about those impulse purchases.
* * *
To offset the cost of the caps (less than a hundred greenbacks) I am back to eating ramen noodles with eggs and onions.
So, I got that going for me.
* * *
I’ve also figured out a way to ease my pain when I go to fill up my vehicle with petrol. The stupid cost of a gallon of gas is really a bummer these days. With Dandy Don logic I figured instead of filling up once a week when the needle hoovers around the big “E” on the old gas gauage, I’m filling up as soon as the gauge says I have used a quarter of a tank.
I know I am not saving any money, and I am wasting time, but I feel better only shelling out 12 bucks a pop instead of almost 50. (And, I wonder why no one follows my lead when it comes to the wild, wild world of finances.)
* * *
Man, my sinuses were messed up so much last week because of the high pollen content in the air, I called my buddy “Fred the Tree Guy” to take down a row of pine trees in my yard. Within 24 hours of me shining the Fred Light up into the sky, he and his crew swooped in light Batman, Robin and Batgirl and took out the trees.
My nose says, “Thank you, Fred.”
* * *

Turtles were out last weekend and that was cool, but not as cool as a visitor we had to our neighborhood on Sunday. On that afternoon, as son Sean and I sat watching the old TV show, Kolchak: The Night Stalker, our neighbors Kathy and Mike called.
“Do you have a good camera,” Kathy asked.
“Yes,” I replied.
“There’s a big, white snowy owl perched outside on a pole. Mike says he’s never seen one around here before.”
Sean and I paused the show just as hero-reporter-monster-hunter Carl Kolchak was tripping over his super-white sneakered feet trying to run away from an eight-foot tall bipedal reptile dude who entered the screen, and checked out the white bird.
Sure enough a big, white owl was perched high on a pole just watching stuff. According to Kathy, the owl stayed there for a couple of hours and flew away only when a storm blew in from the west. Cool.
Send in your thoughts to Rush via DontRushDon@gmail.com

So many thoughts, so little space added by Don Rush on April 27, 2022
View all posts by Don Rush →