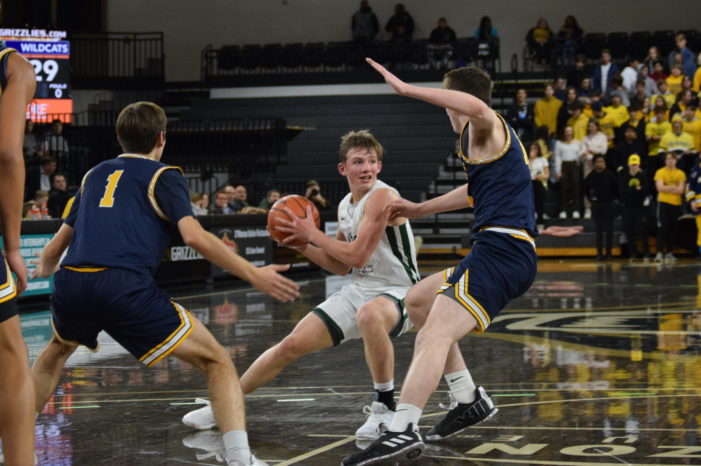 Triskaidekaphobia is defined as “the fear or avoidance of the number 13.” For the Lake Orion Dragons boys’ basketball team, the unlucky number of late has been 59.

The Dragons dropped a pair of home contests, 59-38 to the Clarkston Wolves on Feb. 4, and 59-48 to the Oak Park Knights on Feb. 7, to run their losing streak to five games.

Lake Orion was dealt a major blow the day before squaring off with the crosstown rival Wolves when sophomore swingman Alden Ritt suffered a sprained ankle in practice. One of the team’s better outside shooters, Ritt had begun to establish himself as a go-to scorer alongside star senior guard Cam Sutton.

He is expected to be sidelined for about three weeks, or until roughly Feb. 24. This timeline would put him on track to return for the Dragons’ final three regular season games.

Forced to move forward without Ritt, Lake Orion was unable to establish any rhythm offensively in the Clarkston loss. Held to eight points or less in three of the four quarters, the Dragons found themselves looking up at a 15-point deficit after the first quarter and a 22-point margin at the half.

As a result, sophomore Malachi Grandberry moved into Fisher’s spot in the starting lineup and Dorell “D.J.” Morrow, Jr., a freshman, was promoted from the junior varsity squad.

Falling behind the Knights, 4-0, just 56 seconds into the game, Schroder wisely took a quick timeout. This moment to gather their thoughts proved to be beneficial for his boys as they took an 11-8 lead after the opening frame.

Lake Orion clung to a one-point advantage, 23-22, at the half, but Oak Park mounted their charge in the third quarter. Relying heavily on junior KenJuan Andrews (13 points) and senior DeVonte Edwards (17), the Knights outscored the Dragons, 37-25, in the game’s final 16 minutes.

The loss drops the Dragons to 4-9 (1-6 Oakland Activities Association Red).

“We’ve been forced to play some young guys,” Schroeder said. “We’re down two starters. I thought it went well to begin with, but then our scoring dropped off.

“We need to get more out of our bigs around the rim and they’re coming along a little slower than we would’ve hoped. They (Oak Park) made more layups than us tonight, and limited their turnovers better than we did, that’s what it came down to.”

With Boedigheimer and Sutton being the only consistent senior contributors on the roster, Schroeder’s squad was a young one to begin with. This rash of injuries and sickness has forced the Dragons to become even younger, but the challenge of playing in the OAA’s top division will hopefully pay off in the development of Grandberry, Morrow and others in 2020-21.

“We’re going to leave him up here (at the varsity level),” Schroeder said of Morrow. “The injuries we’ve had are a bummer, but this is a building year for us. We need to learn lessons from our losses, but tonight was a game we could’ve had. Just turned the basketball over too much.”

The Oak Park game completed a four-game homestand for Lake Orion. The Dragons will now hit the road for three consecutive contests, beginning with the Flint Carman-Ainsworth Cavaliers (9-4, 4-1 Saginaw Valley League) on Feb. 11. Results from this game were unavailable at press time but will be covered in the Feb. 19 edition of The Review.