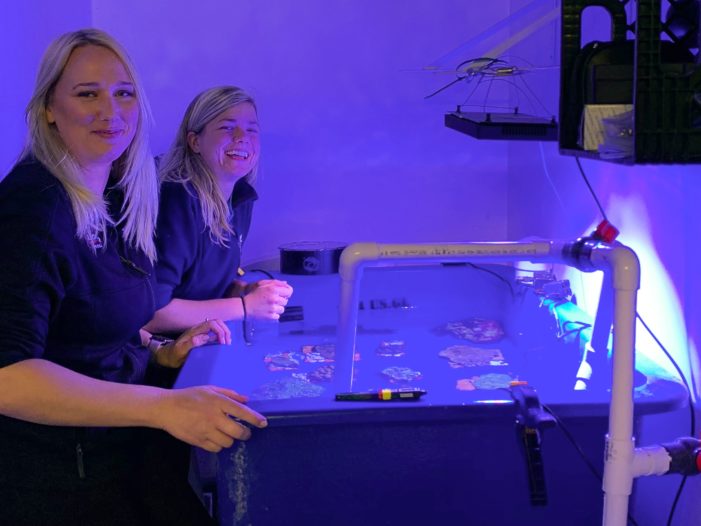 But in the United States, there is only one coral reef — the Florida Reef Tract.

The Florida Reef Tract begins at the St. Lucie Inlet in Martin County and ends at the Dry Tortugas in the Gulf of Mexico. Covering more than 300 miles, the Florida Reef Tract is the third largest coral barrier reef in the world, according to the National Oceanic Atmospheric Administration.

For decades this habitat has been in danger from threats like pollution, habitat destruction and the warming seas, but now a new threat is putting this reef system in danger: a deadly disease that threatens to wipe out the ecological system that resides in those waters.

“These corals are just getting wiped out due to a disease outbreak currently going on in the Florida Reef Tract,” said Lake Orion resident Kelli Cadenas, the displays curator at SEA LIFE Michigan Aquarium. “It’s not a very well understood outbreak. They don’t really know what’s causing it. They can’t seem to isolate a bacteria or a virus that’s doing it, so the concern is that it’s just going to wipe everything out and these species are going to be extinct completely.”

In order to try to save the corals impacted by this disease, SEA LIFE Michigan Aquarium along with other zoos and aquariums, all a part of the Association of Zoos and Aquarium (AZA), have come together to start this conservation program with the help of Florida Fish and Wildlife Conservation Commission (FWC), National Marine Fisheries Service (NMFS), The Florida Aquarium, National Park Service, NOAA Florida Keys National Marine Sanctuary (FKNMS) and the Florida Department of Environmental Protection (FDEP).

SEA LIFE Michigan Aquarium itself has several varying types of corals that they plan to hold and take care of for the next five years. However, depending on how quickly the disease can be understood and how the restoration efforts progress, SEA LIFE could have them longer, Cadenas said.

“The AZA…basically put a call out for help and they said, ‘we need as many institutions as we can to hold these animals.’ There’s currently thousands of these corals in different populations around the country.” said Cadenas. “The reason they’re doing that is if we have some catastrophic failure here or somewhere else, the genetics are preserved. They’re not putting their eggs in one basket by keeping them in Florida.”

For SEA LIFE, conservation projects such as this one, are important not only for marine life, but for humans as well.

“Reef tracts are really important for a lot of reasons. They’re huge habitats for fish. Any reef of any size basically creates that habitat fish can then live on — they can find food there, they can eat algae there and small invertebrates and then those smaller fish feed the bigger fish which feed the bigger fish — the fish that we eat…those are requiring reefs to feed them basically,” Cadenas said. “Reefs also, for us as humans, serve a function as a huge tourist impact…a lot of that economy down there (Florida) really requires reefs for any kind of tourism down there.”

These coral reefs also provide a sort of protection barrier for beaches.

“Reefs tend to be fringing around beaches so you see this big beautiful beach, there’s a reef probably protecting it. (They’re) keeping huge wave surges from coming in and eroding it. They slow down things like hurricanes a lot so in areas where the reefs have degraded hurricane damage can actually be a lot worse because the water can just come in quicker and faster and there’s nothing slowing it down.”

Through the action by SEA LIFE and other participating aquariums and zoos throughout the country, the health of these endangered corals can be ensured and restoration of the reef tract all the more possible.

“These species, if action wasn’t taken with a project like this — would go extinct and it’s a ripple effect,” Cadenas said. “You can think of corals the way you think of a tree. We need trees in a forest to have all the other animals in the forest. Corals are very similar. If you don’t have the corals in that reef, you can’t have the other animals living in that reef.”