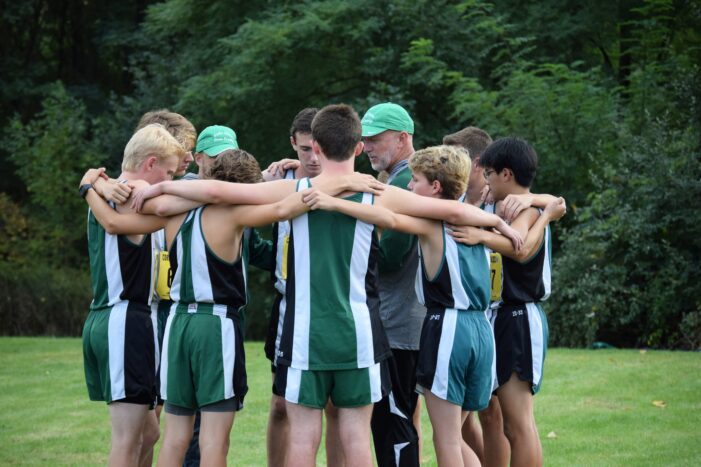 Entering his thirty-ninth season at the helm of the Lake Orion Dragons’ cross country program, head coach Stan Ford has produced dozens of runners who have gone on to compete at the collegiate level.

This fall, his team will be tasked with replacing Andrew Nolan, who crossed the finish line in a blistering 15:27.7 at the Michigan High School Athletic Association (MHSAA) Regional Meet at Goodells County Park in Algonac on Oct. 26 a year ago, and was the program’s lone representative in the state meet at Michigan International Speedway on Nov. 2.

Nolan will be continuing his academic and running careers in East Lansing for the Michigan State Spartans, committing to Walt Drenth’s program in March.

While graduating one of the most accomplished runners in school history obviously makes things more difficult, Ford and his staff return all nine of their other top-10 performers in 2019, leading to plenty of optimism as they prepare to embark on the 2020 campaign.

“This season is interesting because we didn’t get to see these guys in track,” Ford pointed out. As with all other spring sports, the 2020 MHSAA track and field season was canceled by the COVID-19 pandemic.

“You always look to see progress in track, and this is the first time we haven’t been able to do that, but everyone is in the same position. Even looking back and thinking after last season, if we’re going to do anything as a team, it’ll have to be as a team.

“At this point, we don’t have that front runner but we’re hoping the pack develops, and they’re all underclassmen.”

Ford’s top-three returnees are all members of the 2022 class, meaning they have two more seasons of eligibility to improve their already impressive times.

Jacob Gleason, who established a personal best with a 16:44.4 at Algonac last season and joined Nolan as the only other Dragon to receive All-Oakland Activities Association (OAA) Red honors, leads this group, with Will Houvener and Clayton Kuiper not far behind.

“Of our top-15 returning runners, only three are going to be graduating in the 2021 class,” Ford said.

“So, we’re young, we knew we were young, and that kind of hurt us at times behind Andrew (Nolan) last year, but we have a good group of now-juniors and sophomores and should have a pretty good group of freshmen coming in, too.

Accumulating 17 points, Lake Orion finished in third-place in the OAA Red last season, trailing the Clarkston Wolves (22) and Rochester Adams Highlanders (21). The Oxford Wildcats (11), Troy Colts (nine) and Seaholm Maples (four) rounded out the division and the same six schools will compete in the Red again this fall.

“Clarkston should still be good, they have a couple of kids who should be front runners,” Ford said of the forecast for this season.

“Adams did graduate pretty heavy, so I don’t know where they’re going to be. Oxford is a team that’s been trying to break through, and my understanding is they have a solid freshman class coming in. Might be too early for them to do much damage, but they’re up-and-coming.

“I try not to look at other schools, you always do, but I try not to. I tell the kids, ‘We can only worry about our team. If we run our best and lose, that’s all I can ask. I can’t ask you to beat people we haven’t touched in a long time.’

“If we get better throughout the season, I’m happy. And that’s my approach every year, our goal is just to get better.”

The Dragons began their traditional optional Monday summer workouts on June 22, with the first day of formal practice slated for mid-August.

“We have to test all the kids, take temperature checks, do all that,” Ford explained of the COVID-19 precautions.

“My summer workouts are totally optional, so that makes it tough, too, because I don’t know who’s going to show up. I’ve been on the phone with Chris Bell (Lake Orion’s Director of Athletics) and having Zoom meetings, trying to get our heads wrapped around all the stuff we must do just to have summer practice.

“My hope is that all that stuff is gone by the time our practices start in August and definitely gone by the time we start school and meets because you can’t run a meet and maintain social distancing, can’t do it.

“Obviously, all the sports are in the same boat, but we’re getting started like we’re going to have our season like normal. Keeping our fingers crossed.”

Due to this uncertainty, the team has yet to officially unveil their 2020 schedule, but Ford confirmed last season’s calendar is a reliable tentative template.

This would have the Dragons opening their season with an OAA Red Jamboree on the first Wednesday of September, with a trip to Kensington Metropark in Milford for the Averill Invitational three days later.

As for Ford himself, a 1972 graduate of Rochester Adams, the coach still runs roughly 50 miles weekly. One of the best role models for young men and women in the history of Lake Orion High School, we will soon see if his young Dragons can take that next step, build on last year’s gained experience, and compete as a pack for the OAA Red crown.

Returning depth will carry Lake Orion cross country this fall added by mmkelley on July 8, 2020
View all posts by mmkelley →