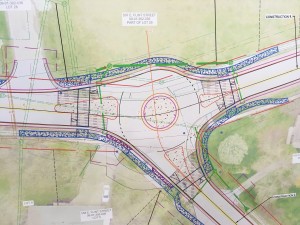 The Road Commission for Oakland County (RCOC) plans to build a mini-roundabout at the Miller/Orion/Flint roads three-way intersection, with construction starting later this fall.

And Orion residents are adamantly opposed to the project, saying it is unnecessary and a waste of money that could be better spent fixing other deteriorating roads.

During a public information meeting on Thursday at Blanche Sims Elementary, residents got the chance to pose their questions about, and opposition to, the $570,000 project to RCOC engineers.

The Miller/Orion/Flint roads intersection is well-known for traffic backups during the morning and afternoon peak travel times, with drivers also waiting for long periods in driveways and side streets to turn on to the main roads.

Tom Blust, RCOC director of engineering, said the roundabout should address some of the traffic congestion at the three-way intersection, especially during those peak travel times.

“The existing issue is the backup on Orion Road in the evening, the p.m. rush hour, and in the morning, it backs up on Flint Street, so the intersection is not operating very efficiently,” Blust said. “We’re told backups continue all the way to Atwater, sometimes beyond that.”

People traveling on Orion Road do bypass the intersection by cutting through Atwater to Perry Street and then back to Flint Street where there isn’t enough of a gap in traffic for cars to turn left on to Flint Street.

People living near the intersection also have complained about the problem of getting out of their driveways because of the lack of gaps in traffic.

“We’re hoping to solve those issues. Or at least make it better. It may not solve all the problems, but it’s a mini-roundabout in a relatively small intersection and we’re trying to make it better,” Blust said.

The roundabout is designed to keep traffic flowing and is not a safety issue.

“This is not driven by crashes. We don’t have a large number of crashes here. It’s not a safety project, it’s more of a traffic operations improvement project,” Blust said.

The RCOC did use traffic counts and turn movements when designing the roundabout but did not do a long-term traffic study. “We used the existing traffic conditions,” Blust said.

The project will be paid for by Tri-Party funds from the road commission, the county general government and a local contribution.

“The road commission is paying the Lion’s Share of it. We’re hoping the Village of Lake Orion will also contribute, partner with us and show their support. We don’t have a formal agreement with village yet. We’ll typically try to execute that once we’re actually closer to construction and know what the actual costs are based on the bid,” Blust said.

Construction should begin shortly after Labor Day and continue through the fall. The intersection will be closed to all through traffic during construction.

“We’re hearing some mixed responses, probably more negative responses today than other proposed projects. Which is not unusual for a roundabout. Prior to a roundabout being built, the public is 68 percent opposed to the roundabout: after it’s built and in operation for a year there’s usually an approval rating of 75 percent,” Blust said, citing a federal highway administration study.

Howard Daenzer lives on Park Island and says he’s driven through the intersection for 58 years. “Since 1960. And I’ve never seen a major problem. I just drove on it (today) and there are no major obstructions.”

Daenzer said he’s against using tax dollars for the project and the same objective could be accomplished with $20,000-$30,000 in traffic signals instead of a roundabout.

“It’s a farce, it isn’t required. It’s a joke. It’s an absolute joke,” Daenzler said. “Where’s the studies that prove we need a roundabout? Everybody’s opposed to it, that I know of. They don’t want to spend $600,000. If you want to spend $600,000 on roads, go fix Central Drive. Go fix Heights Road. Go fix Miller Road. They’re absolute garbage cans. You can’t drive more than five miles an hour on Central Drive.”

While village administration and Police Chief Jerry Narsh tend to support the roundabout, Village Council President Pro-tem Bradley Mathisen said he is against the project, especially after hearing from residents and seeing the RCOC’s plans.

“I don’t agree with what’s been said about the roundabout. I’ve been in the village 28 years and not known of an incident, minor incidents, but maybe five times in those 28 years. Two times during the day on any given day during the school year there are major backups, but otherwise I don’t see the need for it. It doesn’t fit there.

“The stop signs have been working like they’re supposed too. It’s a waste of time. It’s a waste of money. The road commission can be doing something better with the money. To just drop this on people – the village residents and township residents – it’s just not right. It came about very suddenly,” he said.

Mathisen said he first heard about the roundabout about a month ago at a road commission/village council meeting. “And it was dropped on us like a bomb.”

The road commission still must acquire some rights-of-way from homeowners, get construction bids and finish plans.

“I don’t think they’re going to get it done. With the amount of negativity I’m hearing (from residents), I’d be surprised if they went through with it,” Mathisen said. “From most of the residents I’ve been hearing a flat out ‘No’ that they don’t want it.”

“Somebody at the road commission is in love with roundabouts and every place somebody says, ‘Oh, we’ve got a backup’ – roundabout!” said JoAnn Van Tassel, who lives off Baldwin Road and is opposed to the construction of five roundabouts slated for the Baldwin Road widening project.

“There is an element of ‘Give it a chance.’ We do think it will make some improvements, particularly in reducing the delays at the long queues (backups) and allowing better gaps for people to get out in nearby driveways and roads,” Blust said.

“There’s not a lot of truck traffic here, but if there is a large truck the trailer can traverse the central island. But we have (the roundabout) big enough that a school bus won’t have to do that. A school bus can stay within the paved asphalt section.”

Van Tassel also is chair of the Lake Orion Lions Club property committee. The Lions Club owns land at the north side of the intersection and Van Tassel said the RCOC neve contacted the club about taking part of the property for the new roundabout.

She said she first saw the plans from Village Manager Joe Young when they were talking to a prospective buyer for the property.

“It’s not a matter of whether you like (roundabouts) or not; it’s a matter of whether it’s needed,” Daenzler said. “This one is not needed. It’s time the road commission woke up and started listening to the residents of the community. Where’s the approval of the residents? There is no approval. They’re just taking it on themselves, saying this is what we’re doing, we don’t give a sh*t about you people that live there.”

Amy and Don Silvester were told the roundabout would make it safer for pedestrians.

The Silvester’s live on Shorn Road, east of Miller Road, and use the intersection daily. Amy runs and walks in the area, often with her five-year-old son.

“I don’t think they’ve put enough thought into the plan. I think they need to go back and evaluate how it’s all going to work,” she said. “And if trucks go through (the roundabout) the center will be concrete, so are they just going to run over it? So, are we going to break up concrete (in the roundabout intersection)? I’m not really sure how it’s all coming together and how it’s safer.”

They also have concerns about drivers using Shorn Road as a cut-through – during construction and to avoid the intersection – saying drivers already speed down the road and it isn’t safe for pedestrians.

“They said, ‘Well, we can put a roundabout in a straightaway to reduce speed.’ And I said, ‘Oh, hell no,’” Silvester said.