Deputies warn disorderly man not to return to Meijer

Deputies were dispatched to the Meijer store, 800 Brown Rd., for a report of a man harassing employees at 4:02 a.m. March 22.

Orion Township Units #1513 and #1518 responded to the scene, located the man, issued a trespassing citation warning and advised the man to leave store property.

Deputies informed the man that if he returned it would result in a custody arrest.

The man complied with the warning.

Detectives are looking for a man who snatched some auto parts and then fled the dealership without paying.

Deputies went to 3800 Lapeer Rd. for a retail fraud report at 12:23 p.m. March 22 and met with the employee who said that a man entered the dealership and proceeded to the parts counter and picked up his parts.

The man was instructed to go to the cashier to pay for the items. Prior to going to the cashier, the suspect requested to see another part.

When the parts employee turned to go get the part, the suspect grabbed the original parts from the counter and made a fast exit out of the dealership passing all points of purchase making no attempt to pay for the parts.

A 43-year-old Orion Township man went to the Orion Twp. Substation to lodge an identity theft complaint at 9:08 a.m. March 23 about unemployment benefits he never claimed.

The man told authorities he received a letter from the state of Kentucky Unemployment agency stating he was eligible for benefits. He received additional letters stating the unemployment benefits were overpaid and he owed unemployment several hundreds of dollars.

The victim contacted the unemployment agency and told them he never applied for benefits and that this was a fraud.

A 45-year-old resident met with deputies at 1:34 p.m. March 22 to report that he was on his computer doing his banking when the screen went blue with a message from Microsoft Virus Protection stating that his computer had been infected and he had to call the number provided.

The victim called the number and was informed by an individual who answered the phone that his bank account had been hacked and that he was going to do a three-way call with a representative from the bank.

After a brief conversation, the victim was told to go to the store and buy $5,000 in gift cards and provide the numbers to the caller, who said the man would then get his money back.

The man determined that he was a victim of a fraud. Detectives are investigating.

Woman doesn’t have license — but has outstanding warrants

While on patrol eastbound on Brown Road near Joslyn Road at 12:54 a.m. March 24, deputies stopped a car for careless driving.

The driver immediately told deputies she did not have a driver’s license. When deputies attempted to identify the passenger, they discovered she had several warrants for her arrest.

Deputies searched the vehicle and discovered a small bag of suspected cocaine and drug paraphilia. Warrants were confirmed but deputies were advised to release the woman and advised her to contact the court.

All evidence will be presented to the prosecutor’s office for review.

An Orion Township woman is out a bag of baby outfits after an unknown thief swiped the bag from the woman’s porch sometime between 10 p.m. March 23 and the next day.

The theft occurred on Kingsdale Boulevard.

A 32-year-old woman told deputies she sold several baby outfits to someone online but had not given her address to the purchaser.

The victim placed the bag of clothes on her front porch at 10 p.m. on March 23 and when she checked on March 24 the bag was gone.

All information was turned over to detectives. 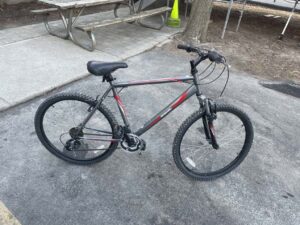 A resident on the 500 block of Green Hill Lane called police after someone took two gym bags from their unlocked vehicle sometime before 8:24 a.m. March 25.

The victim reported that the vehicle was parked in the driveway at approximately 10 p.m. on March 24.

The vehicle was not damaged.

Shoe thief is fast on their feet

A suspect grabbed four boxes of running shoes from Designer Shoe Warehouse, 4910 S. Baldwin Rd., at 11:34 a.m. March 26 and quickly ran out of the store.

The shoes are worth $360. Deputies will be gathering surveillance footage in the complex in an attempt to identify the suspect. Detectives will be continuing the investigation.

Intoxicated driver at restaurant drive thru tries to flee deputies

An intoxicated man refused to submit to sobriety tests and then tried to drive away, so Oakland County Sheriff’s deputies had to take control of the vehicle and arrest the man.

The sheriff’s office received 911 calls around 8:43 p.m. March 27 from a passing motorist regarding a careless or a possible intoxicated driver at the drive thru at Culvers restaurant.

Deputies located the vehicle and made contact with the driver, a 41-year-old Portland, Oregon resident, and detected alcohol on the man’s breath with indicators he was under the influence.

The man refused to exit the vehicle, cooperate with sobriety tests or the preliminary breath test.

The driver then attempted to drive away while deputies were speaking with him, so deputies took control of the driver, who continued to resist arrest.

Additional deputies arrived and the man was handcuffed and placed under arrest for Operating while Intoxicated.

The man was transported to the hospital for a blood draw and then to the Oakland County Jail without incident or injury.

Several traffic crashes occur along M-24 in the village, one downtown

There were no injuries reported in a slew of traffic crashes in the Village of Lake Orion along M-24 and in the downtown area last week.

Lake Orion police responded to a traffic accident at 7:45 p.m. March 22 at S. Broadway and Front streets when one driver failed to stop and crashed into the rear of the vehicle in front. There were no injuries reported.

A vehicle turning left out of Converse Court on to M-24 near the Mobile gas station collided with a vehicle on M-24 at 1:54 p.m. March 24.

At 5:38 a.m. March 26, a vehicle pulling out of Converse Court (near the Mobile gas station) at S. Broadway Street (M-24) struck a vehicle southbound on M-24 “because of an unknown vehicle interfering” caused the crash, according to police reports. There were no injuries reported.

Lake Orion police are investigating after a resident on Bellevue informed authorities at 12:56 p.m. March 24 that someone had slashed all four tires on the resident’s vehicle.