Investigators looking for person of interest in theft of packages case 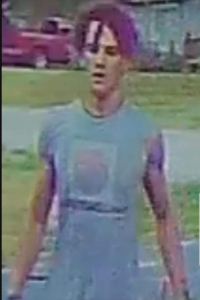 Authorities want to interview a person of interest regarding the theft of packages stolen from the front porch of an Oakland Street home.

Deputies responded to the 500 block of Oakland Street at 5:08 p.m. July 10 after a resident reported two packages stolen from the front porch sometime between 6-8 p.m. on July 9.

The woman reported that she left her home with her husband at around 5:30 p.m.

A neighbor reported seeing both packages at 6 p.m.

The woman returned home at 8 p.m. and both packages were gone from the porch.

Investigators obtained a picture of a person of interest in the area at the time of the incident.

Hey dad, can I borrow your car?

An Orion Township homeowner is probably wondering how a Houdini pulled off a theft in the middle of the night.

Deputies were dispatched to the 2100 block of Marie Drive at 5:57 a.m. July 6 for a larceny complaint after a 48-year-old man reported he parked his vehicle in his driveway on July 5, and the next morning he discovered his vehicle was missing all four tires and was sitting on red paver bricks.

All evidence and photographs were collected and turned over to the Auto Theft unit to continue the investigation.

I spy with my little eye…Oh, my! Don’t look this way, kids

Drivers on M-24 got an extra little unexpected peek at the scenery last Thursday.

Deputies received a call at 5:04 p.m. July 9 to respond to the area of Lapeer and Clarkston roads regarding a man exposing himself to passing motorists and acting unusual.

Deputies located the man and after interviewing him, determined he was a missing disabled person from Oak Park.

An investigation revealed that that the 59-year-old had a mental condition and wasn’t taking his prescribed medications, or able to take care of his basic needs.

Deputies cared for the man and then transported him to Common Ground for further care without incident.

Deputies went to a home on the 2300 block of Browning at 8:41 p.m. July 9 on a tip that a 23-year-old man at that residence had a 6th Circuit Friend of the Court warrant for his arrest and he was refusing the court order.

The man was lodged at the Oakland County Jail without incident.

Detectives looking for man who assaulted his girlfriend

Deputies responded to the 2900 block of Sunrise Circle at 10:30 a.m. July 10 for a domestic assault report.

A 27-year-old woman reported that her 29-year-old boyfriend assaulted her, adding he was under the influence of drugs and he became upset when she would not help provide more drugs.

He allegedly became enraged and began to throw things, then grabbed her and began to push and choke her, she told authorities.

The woman called the suspect’s mother, who went to the home and to get the suspect. Deputies took the victim’s written statement and photographed her suspected injures.

Deputies were unable to locate the suspect for a statement and detectives are continuing the investigation.

Lake Orion police were notified at 4:45 p.m. July 6 that a 29-year-old Rochester man was arrested on a shopping lifting warrant from the LOPD.

Two vehicles appear to have been damaged by an unknown suspect(s) who shot the automobiles with a BB-gun.

The malicious destruction of property seems to have occurred sometime between June 27 and July 7.

Police are investigating, but anyone with information should contact the Lake Orion Police Department.

Lake Orion police were notified that a 32-year-old Lake Orion was arrested on an LOPD warrant for domestic assault.

Deputies were dispatched to the 4700 block of Huston Drive at 10:19 a.m. June 29 for a larceny from a vehicle complaint.

A 26-year-old woman reported that she parked in her driveway on June 28 but when she returned to her vehicle, she noticed her wallet was missing from the vehicle.

The wallet contained her identification and several credit cards. The vehicle was not damaged. This incident is under investigation.

Deputies were dispatched to the 2900 block of Rockford Court at 6:50 a.m. July 2 for a larceny from a vehicle complaint.

A 24-year-old man reported that he parked in driveway on July 1. When he returned to his vehicle to retrieve his wallet, he noticed it was missing. The wallet contained his identification, several credit cards and cash. The vehicle was not damaged.

This incident is under investigation.

Deputies were dispatched to the 2900 block of Meadowbrook Court at 5:03 p.m. July 2 for theft of personal property from a vehicle complaint.

A 28-year-old victim reported she parked in driveway 7 p.m. on July 01, 2020 and when she returned to her vehicle, she noticed that the passenger side door was ajar.

She said that her rescue hammer was missing.

The vehicle was not damaged. This incident is under investigation.

A woman called and said that her husband, 57, was feeling dizzy and was pale and sweaty.

Deputies arrived at the home and investigated, learning that the man had attempted to hang himself twice in his bedroom but was stopped by a family member.

The man then attempted to consume several pills. The man was transported to Ascension Providence Hospital mental health evaluation.

Deputies arrived, made the scene safe, located and identified a 46-year-old man, and determined that he was highly intoxicated and wanted to harm himself.

The man was transported to St. Joseph Hospital by Orion Township firefighters for a mental health evaluation.

Man gets mental health evaluation and help at Common Ground

Deputies received a call to respond to the Orion Township substation on Joslyn Road to meet with a man in reference to a court ordered mental health committal at 4:17 p.m. July 1.

The COVID-19 pandemic has affected people in many ways. If you or anyone you know needs help coping with depression, anxiety or a crises situation, contact Common Groud Resource and Crises Center at 800-231-1127.

An online chat is available at: commongroundhelps.org.