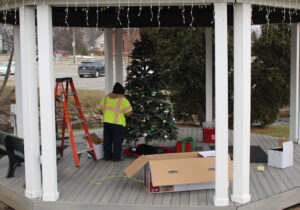 Vandals struck at Children’s Park, breaking the Christmas Tree in the gazebo in half, an incident report from the Lake Orion Police Department stated.

The suspects also broke a couple of picnic table tops, along with spindles on the gazebo ramp.

The Village of Lake Orion Acting Public Works Director spotted the damage and reported it to Lake Orion police around 7 a.m. Dec. 17.

There was no estimate of the damage available by press time.

The Lake Orion Downtown Development Authority had purchased the now damaged tree and had a tree lighting ceremony on Nov. 12. — By Jim Newell

A woman who reportedly became distraught and left her home was found safe after a search by an Oakland County Sheriff’s Office K-9 unit and helicopter.

Deputies responded to a 911 call at the 3200 block of Yosemite Drive at 10:33 a.m. Dec. 15 for a missing person report and spoke with the woman’s mother, who reported her 21-year-old daughter left the home after becoming distraught.

Deputies found a video of where the woman was last seen and began searching a large wooded area with the assistance of K-9 and the aviation team.

The helicopter located the missing female approximately one-half mile from her home. She was taken to St. Joseph Hospital by deputies for a mental health evaluation.

Man arrested after assaulting his girlfriend while driving

A woman called authorities to report that her boyfriend assaulted her while they were driving, punching her several times in the face.

Deputies at the Orion Township Substation spoke with the 43-year-old woman at approximately 11 p.m. on Dec. 15 and determined the couple were in a vehicle heading south on Lapeer Road when the 32-year-old man started arguing with his girlfriend.

The suspect then grabbed his girlfriend around the throat and started punching her several times in the face.

Deputies located the suspect and brought him to the Orion Township Substation and interviewed all parties involved.

Based upon the victim’s statements and evidence, the suspect was arrested for Aggravated Domestic Assault and lodged at the Oakland County Jail pending a prosecutor’s review.

The man was arraigned on the charge of Assault with Intent to do Great Bodily Harm and Domestic Violence in front of Magistrate Marie Soma at the 52nd/3rd District Court in Rochester Hills.

Man arrested for attempting to record another man in a bathroom

A Sterling Heights man was arrested for attempting to record another man in a private setting at a local gym.

Deputies responded to Planet Fitness, 1101 S. Lapeer Rd., at 1:27 p.m. Dec. 16 for a report of a man who allegedly began photographing another person in an adjacent bathroom stall on his Apple cellphone.

The victim, an 18-year-old Orion Township man, stated he saw the suspect, a 21-year-old Sterling Heights man, place his cellphone with the camera facing the victim under the stall while he went to the bathroom.

The victim confronted the perpetrator and alerted police, who arrived on scene, secured the cellphone and arrested the suspect.

Deputies took the suspect back to the Orion Township Substation, where a detective interviewed the man and determined that he attempted to record the other person for sexual gratification.

Detectives seized additional electronic devices for their investigation. The suspect was transported to the Oakland County Jail pending the issuance of criminal charges.

Detectives learned other incidents similar in nature may have occurred. Evidence collected is being forensically analyzed to determine the extent of these crimes and which locations.

The suspect was arraigned on the charge of Use of Device for Recording and Photographing in a Private Place in front of Magistrate Marie Soma at the 52nd/3rd District Court.

He was given a $15,000 personal bond and released on GPS tether.

Man arrested for possession of narcotics, driving on a suspended license after car accident

Deputies were on routine patrol when they discovered a vehicle in the ditch at 11:37 p.m. De. 16. The vehicle was running and there was a man behind the wheel.

As deputies pulled up to the vehicle, they noticed that the vehicle had no license plate. They requested the man’s driver’s license and other paperwork for the vehicle.

The man’s driver’s license was expired. When deputies asked the driver if he was driving on a suspended license, the man stated “no” according to the report.

A computer check confirmed that the driver had multiple prior suspensions and his license was currently suspended.

When deputies reproached the suspect’s vehicle from their patrol vehicle, they noticed an empty gun holster on the passenger side floor and ordered the driver from the vehicle, placing him in the rear of a patrol vehicle.

Deputies then searched the vehicle and found suspected narcotics inside the center counsel, a loaded Glock 9 mm magazine in the driver’s side door, along with a loaded 223/5.56 pistol in the trunk.

The man was arrested on Driving on a Suspended License – second offense and possession of narcotics and transported to the Oakland County Jail.

The suspect has been released pending further investigation and lab results on the suspected narcotics.

Deputies were dispatched to the 3700 block of Rohr Road at 9:11 a.m. Dec. 20 after a 65-year-old township resident told authorities that on Dec. 15 the United States Postal Service delivered three books and unknown suspects had stolen the books.

All information and evidence were turned over to the detective bureau to continue the investigation.